DAYTON, Ore. — Next month’s Oregon Chardonnay Symposium will return to Stoller Family Estate having grown from last year, and yet the March 14 consumer event in the Dundee Hills is tracking to be another sellout.

“We allotted about 250 tickets, and I’m at a little over 200 sold with about a month out,” co-founder Paul Durant of Durant Vineyards told Great Northwest Wine. “We’re getting close.”

Following the two-hour discussion that begins at 2 p.m., winemakers will pour 50 examples of Oregon Chardonnay — rain or shine — during a two-hour grand public tasting scheduled to start at 4 p.m.

“It’s really geared toward consumers,” said Durant, co-owner of Durant Vineyards and Red Ridge Farms. “It got a little geeky last year, and there are a lot of trade people there, but that’s not the focus. My vision was to always have it be something that anybody could feel comfortable at and for someone who just wants to learn about Chardonnay. That’s really the intent.”

And Durant said he and co-founder Erica Landon stress that the goal is to help grow the fan base for Chardonnay and the participating wineries.

“As we converse with winemakers, we tell them this is an opportunity to connect with consumers,” Durant said.

At this point, the only tickets available are the combination pass ($150), which is good for both the technical panel and grand tasting. Individual tickets to grand tasting  ($50) are sold out.

Durant’s family began planting its vineyard in 1973 with the focus on Chardonnay, Pinot Gris and Pinot Noir.

“I had come back to the family business, and I always had this affinity for Chardonnay,” Durant said. “I just love it as a grape. As a kid, I loved the taste of it. I loved picking it. And as an adult, I loved the wine.

“It also felt to me that at the time as a grower that it wasn’t being appreciated, and I’d like to be paid more money for that fruit, so what can I do to further this along?” he added.

He reached out to Landon, co-owner of Walter Scott Wines and one of the region’s top sommeliers. The collaboration led to the first Oregon Chardonnay Symposium in 2012 at the Durant family’s Red Ridge Farm.

“Erica was the moderator, and we pulled together about eight other winemakers,” Durant said. “Dave Paige from Adelsheim came at the drop of a hat, and they are huge supporters of this. So we put this panel together and kind of threw it out there and geez, it sold out.

“The next year, we thought about going a little bit bigger and do really small, niche winemakers, and we did it here and man, it sold out again!”

In 2014, they went even bigger but made it less formal, using the International Pinot Noir Conference as a model. That explains the technical session followed by a grand public tasting.

“We threw it out, and we had 65 wineries from Oregon who submitted wines last year,” Durant said. “It was really cool. So we picked about 35 of the best.”

They’ve continued to underestimate the public ticket sales and the list of wineries that want to be involved in the symposium. This year, more than 100 Chardonnays were judged for the 50 spots at the public grand tasting.

“There is a panel, and I am not on it, and neither is Erica,” Durant said. “We pulled together some journalists, some restaurant buyers, wine merchants and sommeliers. They tasted through them blind and picked the top dogs.”

One gets the sense that Durant would be a benevolent judge.

“There’s that movement of ‘Anything But Chardonnay,’ but I like all styles of Chardonnay, and that’s one of the beautiful things about it,” Durant said. “It really is grown around the world, and people can put their stamp on it in any number of ways.

“I’m not a fan of Yellow Tail, but a Rombauer?” he continued. “I can appreciate it for what it is, but I can also be provincial and a complete homer for Oregon Chardonnays, too. Vibrant acidity. Malolactic. A light touch on the oak.“

2015 symposium to look at clonal selection 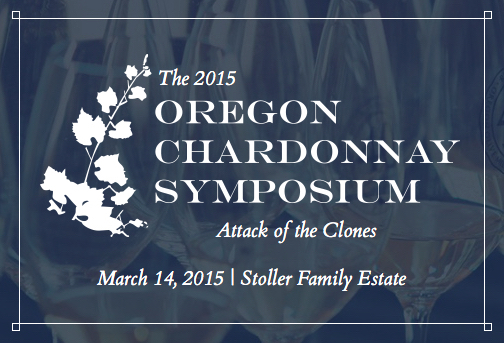 “If you look at the theme, it’s ‘Attack of the Clones,’ which kind of highlights this schism in the industry where you have the Dijon clone guys and the heirloom clone guys,” Durant said. “It will be a good panel. It’s moderated by Raj Parr from Evening Land. All of them have street credibility and none of them have anything to prove. It should be a fun panel.”

Two of Durant’s supporters are Paul of Cameron and Lett of The Eyrie Vineyard.

“They are well-versed in this, and they certainly are opinionated so it should be a lot of fun,” Durant predicted. “You don’t have to agree with them, and we want this symposium to be inclusive of all winemaking styles and try to embrace wines throughout the state as much as possible.”

Research indicates that only 5 percent of the Oregon’s production is Chardonnay.

“There are hardly any plantings, and there’s half of the plantings there were back in the ‘90s because the market was really soft, but there’s a lot of Chardonnay getting planted and that will only help to elevate it and give it more exposure,” Durant said. “My phone rings off the hook for Chardonnay fruit. People want it as much as Pinot Noir right now.”

And, thanks to Durant and Landon, more consumers are interested in learning more about the grape through the Oregon Chardonnay Symposium.

“It’s just really grown, and both Erica and I have both been taken aback by it a little bit,” Durant said. “We’re pretty small. We’re not big producers, but we think it shows that Oregon Chardonnay should be the other premier grape. We have a lot of Pinot Gris (at Durant Vineyards), and I love Pinot Gris, but Chardonnay is the right grape and right wine to be that flagship.”