PROSSER, Wash. – Ron Bunnell didn’t start out with the thought of focusing on Rhône varieties – or even being in the wine industry.

But today, the owner and winemaker for Bunnell Family Cellar in this Yakima Valley town arguably produces among the best Syrahs, Grenaches, Petite Sirahs and Rhône-style red blends in the Pacific Northwest.

We recently traveled to Prosser to sit down with Bunnell at Wine o’Clock Bistro, which he owns with his wife, Susan, to talk about his winemaking career and how he landed in the cradle of the Washington wine industry.

From the South to wine country

Bunnell was born in Memphis, Tenn., and a bit of that Southern drawl still works its way into his voice as he talks. He went to college at the University of Tennessee, where he studied biology, then earned a master’s degree in plant ecology.

For a few years, Bunnell worked in government jobs as a botanist. After growing weary of that, he wondered if a career in the wine industry might be in his future.

“I knew about the viticulture program at (the University of California) Davis,” he told Great Northwest Wine. “So I thought, ‘Well, I’ll go back and retrain myself. I’ll be a vineyard manager.’ So I went to Davis, got into the master’s in viticulture program there.”

He got about halfway through the program when he was given some grapes by one of his professors. They turned out to be Cabernet Sauvignon from the Oakville American Viticultural Area in Napa Valley.

“So my first wine was ground zero for great Cabernet in Napa Valley,” he said. “I knew right then I was not going to be a vineyard manager.”

After finishing his studies, Bunnell went to work for Charles Krug, one of California’s oldest and most respected wineries, before landing at Beringer.

This opened a world to Bunnell that included rubbing shoulders with some of the best winemakers in France. After spending some time as a consulting winemaker in Monterey and Sonoma County, Bunnell landed at Kendall-Jackson. This is where Syrah entered his life.

“I worked for Kendall-Jackson all over the state, from Santa Barbara to Geyserville,” he said. “It was a great experience. I got to do a lot of different things. Among those things was I was in charge of the Syrah program. I was going around the state looking at grape sources and got a broad brushstroke of what Syrah could be in the different appellations of California.”

In 1999, Chateau Ste. Michelle lost its head winemaker, Mike Januik, and its red winemaker, Charlie Hoppes, as each left for new projects. A friend of Bunnell’s who worked on the vineyard side at Ste. Michelle Wine Estates called him and began to encourage him to apply for the job of red winemaker.

“I thanked him but declined,” Bunnell said. “I didn’t really want to leave California. That’s when he put the full-court press on me. He made it sound like I’d really be a fool to miss this opportunity. And in retrospect, I think he was right. It was a great opportunity.”

During his time at Chateau Ste. Michelle, Bunnell oversaw a period of tremendous growth, in which the red wine program at the state’s flagship winery doubled.

“I got to work with most of the appellations in the state,” he said. “I eventually was able to work exclusively in the Col Solare program.”

By 2005, Bunnell was ready to move on and build his own winery.

“I decided to build my own thing.”

When he left Ste. Michelle, one of the first questions Bunnell had to ask himself was what his focus would be.

“I was so impressed with the quality of Syrah from Washington that I knew that had to be the focus,” he said. “I’ve been to the Rhône Valley several times, loved it there and loved the varietals. There’s something about Syrah that just speaks to me.”

Within a year of opening, Bunnell’s decision to start his own winery was paying off. In a blind tasting of about 130 Northwest Syrahs conducted by Wine Press Northwest, two of Bunnell’s 2004 Syrahs – from Boushey-McPherson and Clifton vineyards, were among the top wines.

Today, Bunnell continues to make a lot of Syrahs, including a new one called ALX, that is named after his son, Alex. Last year, the inaugural 2009 vintage of ALX landed at No. 8 in The Seattle Times top 50 list, as well as No. 26 on the Great Northwest Wine top 100 list. While the 2009 was 100 percent Syrah, future vintages will be a blend of Syrah and Malbec.

Last year, Wine Press Northwest magazine put together a tasting of Rhône varieties that didn’t include Syrah, as well as Rhône-style red blends. Once again, Bunnell’s wines showed beautifully, with his 2008 Lia, 2008 Vif, 2008 Mourvèdre, 2009 Grenache and 2009 Petite Sirah all earning the publications top “Outstanding” rating in the blind judging.

Bunnell is excited about Grenache, which is coming on as a strong variety in Washington, as well as Mourvèdre, which required a lot of patience while waiting into November for the grapes to ripen.

“I kind of cut my teeth in Sonoma County and Dry Creek, so I was spoiled by all the gnarly (Petite Sirah) vines,” he said. “When I came to Washington, I was a little dubious about our ability to reproduce that. But my work in Northridge Vineyard (on the Wahluke Slope) and a few other sources since that time have given me the confidence that this is going to be a great grape for Washington. These plants are 10 years old instead of 60 or 70, and they’re already exhibiting incredible flavor profiles.” 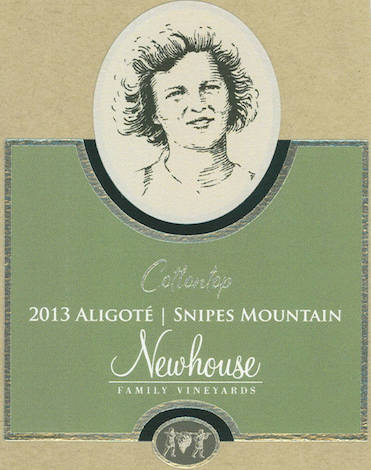 In addition to its main label of Bunnell Family Cellar, the Bunnells also make wine under three other labels:

RiverAerie is a label that is named after the Bunnells’ family home overlooking the Yakima River.

“Our house sits on a big bluff overlooking the river, so my wife coined that name for the property.”

Wine o’Clock is the name of the couple’s bistro in the Vintners Village in Prosser, so this label includes delicious, everyday reds and whites with a particular focus on Italian varieties.

Newhouse Family Vineyards is a partnership with the Newhouse family, particularly patriarch Steve Newhouse, who owns vineyards on nearby Snipes Mountain. Under this label, two wines are made, a red called Vestige, and a white called Cottontop. This label should not be confused with Upland Estates, owned by Steve Newhouse’s son Todd with wines made by Robert Smasne.