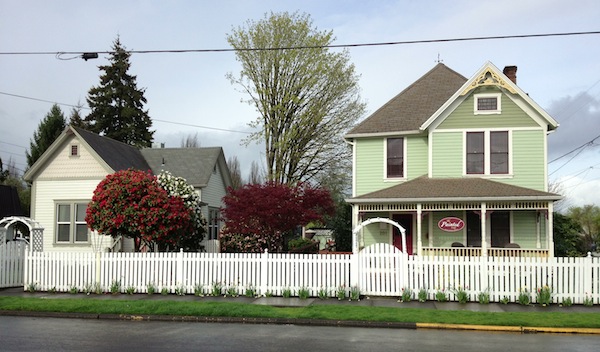 The Painted Lady Restaurant, right, and The Painted Lady Cottage in Newberg, Ore., are owned and operated by the husband/wife team of Allen Routt and Jessica Bagley. (Eric Degerman/Great Northwest Wine)

PORTLAND — The acclaimed Joel Palmer House in Dayton, Ore., which has continued its tradition of championing Oregon wines since first opening in 1996, recently received the inaugural Oregon Wine A-List Restaurant of the Year award.

The Oregon Wine Board capped the first year of its program spotlighting restaurants and trade members most supportive of Oregon wines by announcing the category winners during the Oregon Wine Industry Awards dinner Feb. 25 in Portland.

Christopher Czarnecki, the Joel Palmer House’s second-generation chef/owner who maintains a wine list with more than 600 entries from Oregon, accepted the award.

Routt twice has prepared dinner at the famed James Beard House in New York City. Two years ago, he developed what he dubbed a “Newbergundian” menu featuring wines made in the town of Newberg.

“We are thrilled to honor these exceptional advocates of Oregon wine,” said Ellen Brittan, chairwoman of the Oregon Wine Board. “These awards are the highest praise Oregon’s wine industry can give to our most dedicated supporters in the restaurant and wine service community, and they serve as a guide for consumers to the businesses and people who promote and feature the diverse wines of Oregon.”

Andy Zalman of Higgins Restaurant in Portland received the Oregon Wine A-List Wine Director of the Year award for his continued support and advocacy of the wines of Oregon.

From the 72 Oregon Wine A-List restaurants unveiled in January, the best-in-class in each of seven regions were recognized as Regional Stars for superior support of Oregon wines.

Kansas City author/educator Doug Frost, one of only three people in the world to have earned both Master Sommelier and Master of Wine titles, served as the master of ceremonies.