RICHLAND, Wash. – Talk around the dinner table at one household here in the heart of Washington wine country can vary from “How was your day?” to “How’s that fermentation going?”

While they work for competing companies, the couple invariably bring their work home with them. In 2011 – Muñoz-Oca’s first harvest as Columbia Crest’s head winemaker – they both happened to make wines from the same high-end Washington vineyard. And both wines are being released this month.

Munnell’s Wautoma Wines 2011 Cabernet Sauvignon – all 26 cases – will retail for $48, while Muñoz-Oca’s Columbia Crest 2011 Wautoma Springs Reserve Cabernet Sauvignon will sell to wine club members and tasting room patrons for $35. He made a whopping 350 cases of the wine.

The grapes for the two wines were picked the same day, but the two winemakers – now married for nine years – took their wines in different directions from that point forward. They asked the Great Northwest Wine team to evaluate the two wines under blind conditions to see what we thought.

Here is our interview with Munnell and Muñoz-Oca:

Wautoma Springs Vineyard is owned by Tom Merkle, a grape grower who manages several top vineyards for Zirkle Wine Co. in the Yakima Valley. In 1999, Merkle planted his own vineyard near famed Cold Creek Vineyard, north of the Yakima Valley town of Sunnyside.

“It’s really in the middle of nowhere,” Munnell said.

Merkle made the decision early on to plant Wautoma Springs to 100 percent Cabernet Sauvignon, starting with the first 20 acres he put in the ground in 1999. In 2002, he expanded the vineyard to 50 acres, and all of the grapes have traditionally gone to Columbia Crest.

“We started crushing grapes from Wautoma Springs in the early 2000s,” Muñoz-Oca said. “And since the very first vintage, it made it into our Reserve Cabernet.”

Munnell grew up in the Tri-Cities, graduated from Richland High School, then went on to Washington State University to learn enology and viticulture. Muñoz-Oca, meanwhile, grew up in Mendoza, Argentina, and his family is in the wine industry there. The two met in 2001, when Munnell was a viticulturist for Ste. Michelle and Muñoz-Oca was an intern. Both later transitioned into winemaking.

Munnell left the company when the couple started their family. She took over the head winemaking job at Mercer Estates in 2012. However, in 2008, she started Wautoma Wines with Merkle. The first two vintages were sold to other wineries as bulk wine, but they bottled a Cab-Malbec blend called El Prat from the 2010 vintage. That inaugural release landed at No. 10 in The Seattle Times top 50 wines of 2013.

“The wines were so beautiful,” she said. “It was a great opportunity to showcase Wautoma Springs, so I simply pulled a barrel of Cab out of the blend, a barrel that was a standout.”

Munnell gets a mere 2 tons of fruit for the Wautoma Wines brand, while her husband gets 90 tons, 45 of which go into the reserve program.

One might think that Munnell and Muñoz-Oca talk about their mutual vineyard as harvest approaches. That turns out to be far from the case.

“When Tom starts to get ready to pick the vineyard, he’s coordinating with Juan,” Munnell said. “As we’re approaching harvest, he’ll let me know when Juan is going to pick.”

So she doesn’t even hear about it from her husband over dinner?

“By the time we’re harvesting Cab, we’re in the middle of harvest,” she said. “There’s not a lot of time for chit-chat. If Juan has decided to pick (Wautoma), then I’m going to agree.”

During the winemaking process, the two do discuss strategy.

“I come home, and I share what we do with our tank of Wautoma,” Muñoz-Oca said. “At the same time, I’m asking Jessica, ‘What are you doing?’ It’s good to have that back-and-forth. I like the idea of not only having a backup plan, but also new ideas and new energy into the same block that we’ve been working with for years now.” 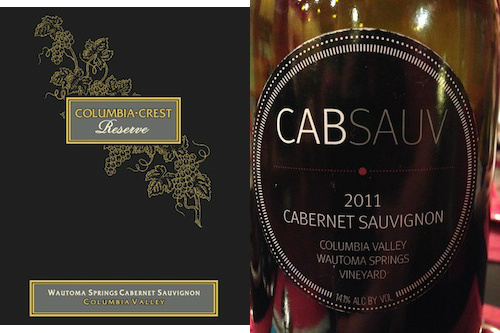 The couple have two children, but their wines are also like their kids.

“I think every winemaker is a little nervous when you release every single wine because you want everyone to love it as much as you do,” Munnell said.

So while they tasted each other’s versions of the 2011 Wautoma Springs Cabernet Sauvignon, they were hesitant to pass judgment under blind conditions.

Not a bad choice idea.

“I think she has a superior palate and better winemaking skills,” Muñoz-Oca said.

“I think he just wants to stay married,” Munnell quipped.

So they handed a bottle of each to the Great Northwest Wine tasting panel to try under blind conditions. Here are our reviews:

Wautoma Wines 2011 Cabernet Sauvignon, Columbia Valley: Mild oak notes stay out of the way of gorgeous fruit aromas of boysenberry, black raspberry and faint hints of sage. On the palate, it is round and luscious with suave tannins and ample acidity through a lengthy and stylish finish.

While both wines earned an “Excellent” rating, the Wautoma Wines Cab got the slight nod.