RICHLAND, Wash. – The plot is thickening at one of Washington’s oldest wine producers.

J. Bookwalter Winery, which has been making wine for 32 years, announced Thursday that it has entered into an agreement with San Francisco-based Maritime Wine Trading Collective to handle the Washington winery’s sales and marketing efforts in North America.

As part of the deal, Maritime will own half of Bookwalter’s popular Notebook brand.

Bookwalter began in 1983 by Bookwalter’s parents, Jerry and Jean. Since returning to the family business in 1997 and ultimately taking over ownership and winemaking, John Bookwalter has built the Richland-based winery from 3,000 cases to nearly 30,000 annually.

Notebook takes off for J. Bookwalter

Bookwalter created the Notebook label four years ago, and it now makes up more than a third of his production. The moderately priced wines – a red blend and a Riesling – sell for $12 to $15 and are nonvintage, meaning Bookwalter and his winemaker Caleb Foster use wine from multiple vintages to craft a delicious, affordable bottle.

“I love blending,” Bookwalter said. “It’s a great way to add a lot of density, texture and flavor. I think you can build a better wine.”

Most wines are vintage-dated, though there are notable exceptions, including sparkling wines made in Champagne and fortified dessert wines from Portugal. Bookwalter said he has received no pushback from consumers because he blends these wines from multiple harvests.

“As long as the wine is good, they’ll come back,” he said.

The red blend typically is dominated by either Cabernet Sauvignon or Merlot, though it usually contains a sizable percentage of Syrah.

Bookwalter’s biggest issue with Notebook is that because it is so popular, he runs out of it quickly.

“It is tough to build branding when you’re going to be dry for three to six months of the year,” he said. “The idea is we can scale it with (Maritime’s) sales efforts. We have to make sure the wine stays at the high quality that it’s been the last four releases.”

Bookwalter and Maritime hope to subtly build Notebook, perhaps at a clip of 2,000 to 5,000 cases per year. Currently, he and Foster make the Notebook wines in-house, often supplementing them by blending in wines purchased from other wineries.

The Notebook wines are sold in the Pacific Northwest, as well as Texas, Florida, Georgia, the Carolinas, Illinois and Missouri. Bookwalter said he and Maritime want to first be able to provide year-round supplies to those markets, then look at new opportunities, such as New York.

Upper tiers to benefit, too 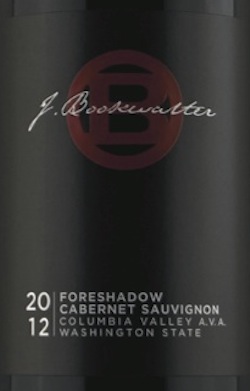 In addition to Notebook, Maritime also will handle sales and distribution for Bookwalter’s higher-tier wines, which range in price from $20 to $60. Many of these wines are made in small amounts and are sold directly to consumers through Bookwalter’s tasting room and bistro in Richland, as well as its tasting room in Woodinville’s Hollywood Hill district near Chateau Ste. Michelle.

In recent years, Bookwalter has taken on a literary theme with his wines. That started in 2002.

When I was working with (wine consultant) Zelma Long, we created Chapter One,” Bookwalter said. “It was sold here at the winery. It was a great wine. People loved it, and it sold out quickly.”

But he didn’t make the wine during the next three vintages, and customers wanted to know why.

“I had clients come in and say, ‘What’s the matter, do you have writers block? You can’t come up with Chapter Two?’ I started to think about that. One of my great passions is reading, and the last name of Bookwalter doesn’t take a marketing genius to figure that one out.”

But Bookwalter wanted to take a clever approach to the names of his wines. Examples include:

In addition, Bookwalter’s wine club is called the “Book Club,” and one of the winery’s largest philanthropic efforts is the Reading Foundation of the Mid-Columbia.