CANYONVILLE, Ore. — Moonlite Winery, which has been open for less than a year in Oregon’s Umpqua Valley, recently topped the Pacific Northwest’s oldest wine event when its 2013 Barbera won the Platinum Award at the Greatest of the Grape wine competition. 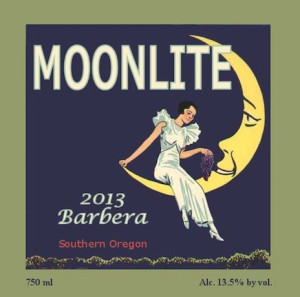 Each of the 28 members of the Umpqua Valley Winegrowers Association nominated one of its own wines for the competition, the centerpiece for the 45th annual Greatest of the Grape. Ed and Amy Coughlin are new members after having been inspired through visits to Umpqua Valley wineries Delfino Vineyards and Girardet Wine Cellars. The Coughlins planted their 9-acre Evensong Vineyard along Old Garden Valley Road in 2008, and Ed began making wine soon after.

Results were announced March 7 at Seven Feathers Casino Resort in Canyonville. This year’s judges were Mary Cressler, a sommelier, wine educator and writer from Portland; Julia Crowley, a blogger from Eugene; and Paul Gregutt, a vintner and wine critic from Waitsburg, Wash.

Fourteen regional restaurants participated in the public tasting, and each restaurant paired cuisine with two wines represented in competition.

Consumers embraced Spangler Vineyards, picking its 2012 Malbec as the People’s Choice Greatest of the Grape and voting Spangler and K-Bar Steakhouse — a Seven Feathers Resort restaurant — as the best wine-and-food pairing. It was the second time Spangler produced the attendees’ favorite wine, and five years ago it also was the Bordeaux variety that Argentina has helped make famous.

Festival officials reported that of the 700 tickets sold, 150 were VIP passes, and the $12,000 proceeds from the event will be spent on marketing wines produced by the Umpqua Valley Winegrowers Association.