Tickets to each of the 25 performance dates at the 4,300-seat Woodinville amphitheater are available starting at 10 a.m., Saturday, March 28 for in-person sales at Chateau Ste. Michelle’s wine shop and online at Ticketmaster.

The cost to see many of the acts starts at $39.50 for general admission, while reserved seating prices range from $59 to $99.50 for the likes of Knopfler and Connick Jr.

The series begins June 13 with a live broadcast of A Prairie Home Companion, featuring narrator Garrison Keillor. The season ends Sept. 12 with the second evening performance by Knopler, former frontman of Dire Straits and considered one of the music industry’s most skilled guitarists.

There’s a fair bit of diversity with this year’s lineup, including the June 19 alternative rock show by Smash Mouth, Toad the Wet Sprocket and Tonic and the Aug. 22 performance by rapper Michael Franti.

September opens with a historic performance by 81-year-old Frankie Valli and The Four Seasons on Thursday, Sept. 3.

This marks the 31st year for concerts at the estate built before Prohibition by Puget Sound lumber magnate Frederick Stimson. Ste. Michelle launched the concert series in 1974 — two years before building its French-styled chateau and two years after its inaugural planting of Cold Creek Vineyard overlooking the Columbia River in Eastern Washington.

Ste. Michelle warns those who exceed the ticket limit risk having their orders cancelled without notice by Ticketmaster. Also, sales at both the wine shop and via Ticketmaster carry a nonrefundable processing fee that applies to each ticket. Those sold at the wine shop cannot be replaced if lost or stolen. 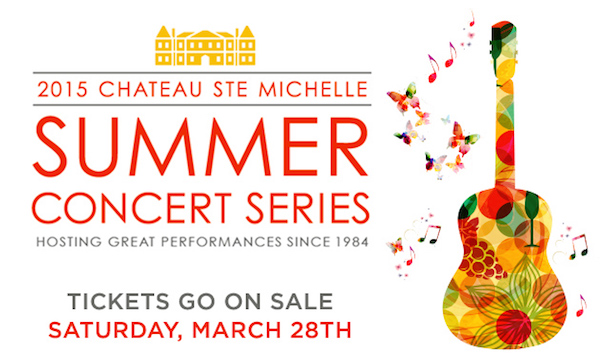