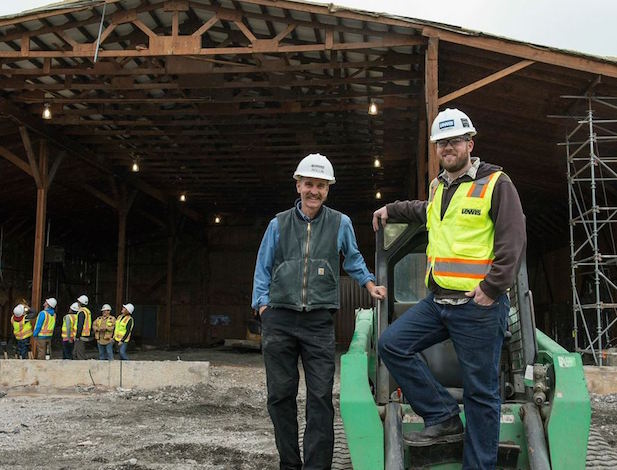 Those visiting the historic property, the first in downtown Dundee to produce wine beginning in 1987, will notice the former barrel room and cellar at the back of the property are under construction. When the project is complete, the customer experience should be more relaxed and educational.

“The removal of some of the buildings here has been quick and somewhat dramatic,” Chris Cullina, Argyle’s longtime director of sales and marketing, told Great Northwest Wine. “The original hazelnut drying house — which was the original winery building — was the first building to come down.

“The former crush pad to the south will be the new entry into the building, and the tasting room will be outside in the former barrel room with exposed trussing.” 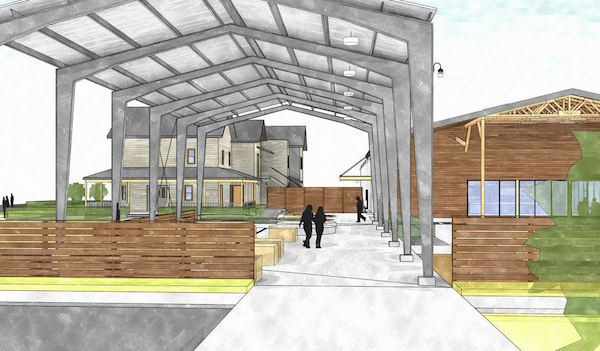 On a busy Saturday, as many as 300 wine lovers will make their way into the historic Spirit House to taste Argyle’s lineup of Pinot Noir, Chardonnay, Riesling and sparkling wine.

“The formal seating inside will double the capacity of our current space, and that helps us respond to the shift in the consumer demand to have more seated experiences and more education,” Cullina said. “They want more interaction with the staff and storytelling experiences.”

For the most part, however, the project is one of renovation and remodel rather than new construction.

“We want to avoid building any new buildings,” Cullina said. “We want to re-inhabit what we had already. Our DNA is always fixed around that original story of the nuthouse — take something that is here already and find a use for it. That puts the emphasis on quality rather than building a Taj Mahal to ourselves.

“This property has a history of being cobbled together,” he added. “Where you are standing used to be city hall, and there used to be an Afghan restaurant here before Argyle was here.” 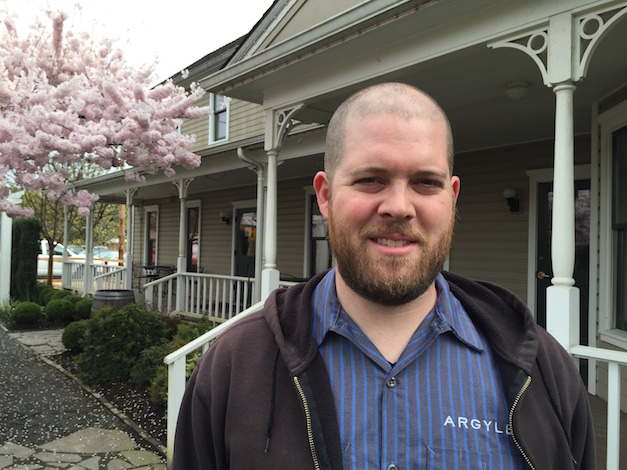 The project began in earnest last year when Argyle moved its 60,000-case production facility five miles to the east in Newberg. Head winemaker Nate Klostermann, who replaced founding winemaker Rollin Soles in 2013, took over the former Suntron Corp., electronics plant — a 70,000-square-foot building near Newberg Ford — in time to crush the 2014 vintage.

Back in Dundee, the new tasting room will comfortably accommodate 75 people, particularly when the weather turns pleasant because there will be a 25-foot overhang. It will create three tasting environments — indoor, covered and outdoor seating — year-round. And salvaging of some lumber and windows from the nuthouse and subsequent winery will help preserve some of the old charm and history.

“It will all be outdoors but covered, so it will transition from an indoor sit-down space to a covered outdoor space to a formal patio and garden,” Cullina said. “And we’ll have gardens on both the west and the east of it. This gives us flexibility for larger events such as Thanksgiving and Memorial days. And if we are weather-challenged, we’ll be able to enclose this entirely.”

There are no plans for food service, Cullina said, but the beautiful trees and garden will continue to frame the Spirit House. The historic and elegant tasting room will be closed to the public, reserved for wine club and special events. At the same time, the new tasting room and hospitality center should provide for a more peaceful experience.

“We’ve already noticed a difference of being on the back of the property,” Cullina said. “The noise difference from the highway traffic completely drops off.” 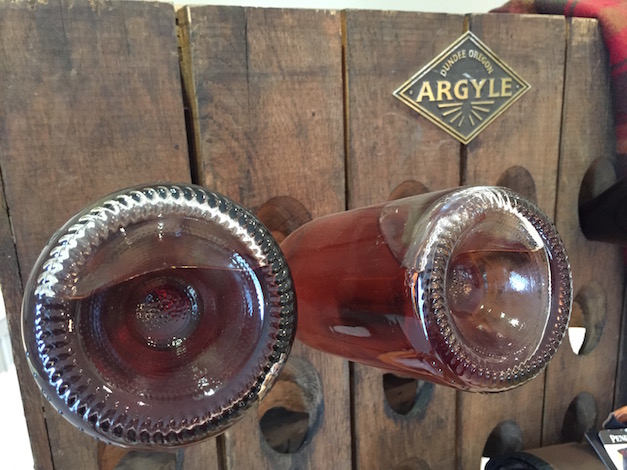 An antique Argyle Winery riddling rack is on display in the historic tasting room in Dundee, Ore. (Photo by Eric Degerman/Great Northwest Wine)

Among the features in the new tasting room will be highlights of Argyle’s extensive 30,000-bottle library, which will be showcased in a centralized climate-controlled area.

“Rollin has always had the wisdom to hold onto inventory in library form, and there’s nice example of our history with our wines that are 20-25 years old, specifically sparkling wine,” Cullina said. “You’ll be helped along through the process. We want to encourage the idea of collecting wines again, which seems gone by the wayside in the United States by our shrinking attention spans.”

A focal point of the remodel will be to shine a spotlight on Argyle’s respected and growing sparkling wine program.

“The story of sparkling wine is a never-ending conversation, and it requires a fair bit of education just to understand the process to strip away some of the mystery,” Cullina said. “There’s always this barrier to understanding that it’s an everyday wine.”

Argyle obviously continues to succeed in spreading the gospel about bubbles.

“The growth curve for our sparkling wine is outstripping the pace of Pinot Noir, even though the total volume of Pinot Noir has gone up,” Cullina said. “The small grassroots things that we do on our back yard — they work and add a level of fun to the presentation.”

All of the renovation, remodel and relocating coincides with the long-awaited construction of the Highway 99 bypass of downtown Newberg and Dundee. The spur extends from near Rex Hill’s production facility east of Newberg to just beyond the Inn at Red Hills, about a mile west of Argyle.

“We’re optimistic about it, but it’s still a year off at least,” Cullina said.

A 15-minute trip from Klostermann’s vinification facility to the Argyle tasting room can take as much as 30 minutes during heavy traffic times, so the reroute of traffic — particularly tractor-trailers, commuters and those headed to the beach — is expected to make it easier for wine tourists to visit the region’s tasting rooms and wineries. 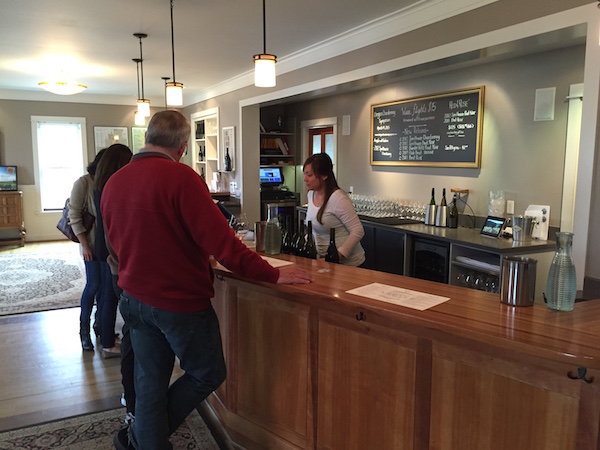 Cathy Martin, marketing coordinator for Argyle, said, “The city of Dundee is rezoning itself, too, to be more pedestrian friendly. This is considered a core business district, and they are putting in some codes that will make it better for people by adding more crosswalks.”

At this point, however, some pedestrians may say a prayer to themselves before strolling across bustling Highway 99 to visit tasting rooms and restaurants.

“There’s a crosswalk there, and everybody driving is pretty nice about stopping. We haven’t lost too many people,” Martin said with a smile.

Both Cullina and Martin can share their experiences about encounters with the legendary spirit of Lena Elsie Imus, who reportedly committed suicide in 1908 on the second floor of the building, which has served as Argyle’s tasting room for decades.

“There are people who used to work at City Hall, and they have stories about her,” Martin said.

Cullina added, “There are old timers who used to work in this building when it was the police department who won’t come back here.”

However, members of Argyle’s team said they’ve noticed less of a spiritual presence in the past year.

“I think all the construction seems to have scared them away,” Martin chuckled.

Cullina praised the collaboration by construction firm Lease Crutcher Lewis, with offices in Seattle and Portland, and SERA Architects in Portland. If construction continues to move along, the new hospitality center and tasting room should be open to the public in July.

“I’m a believer, so don’t jinx me,” Cullina quipped.