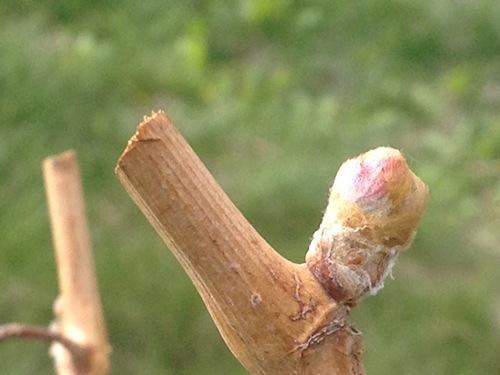 A bud swells and is ready to bring forth tiny leaves at Rockin’ J Vineyard above the Grande Ronde River near Asotin, Wash. (Photo by Niranjana Perdue/Great Northwest Wine)

Wine grape growers across Washington’s Columbia Valley are on high alert as baby leaves are emerging from their winter slumber that are being threatened by spring frosts.

Bud break – the first sign of the new growing season – is 10 to 14 days early. While that bodes well for getting the vintage off to a good start, it also leaves the young leaves vulnerable to temperatures that have dropped below freezing a few times in the past week.

“There’s been a little bit of frost in spots,” said Dick Boushey, who owns Boushey Vineyard north of the Yakima Valley town of Grandview and also manages several vineyards on Red Mountain. “It’s been cool. That’s the problem with these early springs – you’re exposed to the world.”

Boushey said he actually hasn’t completed pruning all of his vines yet, an indication of just how early the 2015 vintage has begun after one of the mildest winters on record.

“We’ve been on the verge,” Boushey told Great Northwest Wine. “Grapes can take 28 to 29 degrees for brief periods of time. I’ve turned on the wind machines three or four times.”

At Sagemoor Vineyards north of Pasco, the grapes so far have dodged any issues, said vineyard manager Derek Way.

“We don’t think we’ve lost anything of significance,” he said. “We think we got through this.”

Way figures Sagemoor is seven to 10 days ahead of last year – also an early season.

“In some regards, it’s shockingly early,” he said. “But this cooler weather could modify that, hopefully.”

Grape grower Dick Boushey hasn’t seen much damage from a November freeze on Red Mountain, though his vineyard in the Yakima Valley was hit in one area. (Photo by Andy Perdue/Great Northwest Wine)

Many grape growers are concerned about vineyard damage from a cold snap that occurred not long after harvest was completed last fall.

Boushey said he hasn’t seen much damage from the November freeze on Red Mountain, though he has seen some in Grenache Blanc vines at his Yakima Valley vineyard. He added that he’s heard about significant damage across the Columbia Valley.

“I know there’s damage in every growing area,” Boushey said. “People are leaving extra buds to compensate, so it might not show up in the yields.”

Jarrod Boyle, owner of Alexandria Nicole Cellars in Prosser and Woodinville, said he appears to have dodged any winter damage at his estate Destiny Ridge Vineyard in the Horse Heaven Hills.

“We went out and cut buds early,” he said. “It appears we didn’t get hit with that.”

In Walla Walla, however, it appears there was significant damage from the November freeze. Kevin Corliss, vineyard operations director for Ste. Michelle Wine Estates, already has seen evidence of that.

But on Red Mountain, Corliss said everything looks good at Col Solare, which is high up on the bench in the eastern Yakima Valley.

“We were expecting some bud damage,” said owner Roger Gamache. “But we didn’t find any.”

Gamache said he believes that because harvest ended a little earlier than usual last fall, it helped the vines prepare for winter a bit sooner, and that helped.

“The plant realizes it’s time to go to bed, it’s time to shut down,” he said. “That’s what saved us last year.” 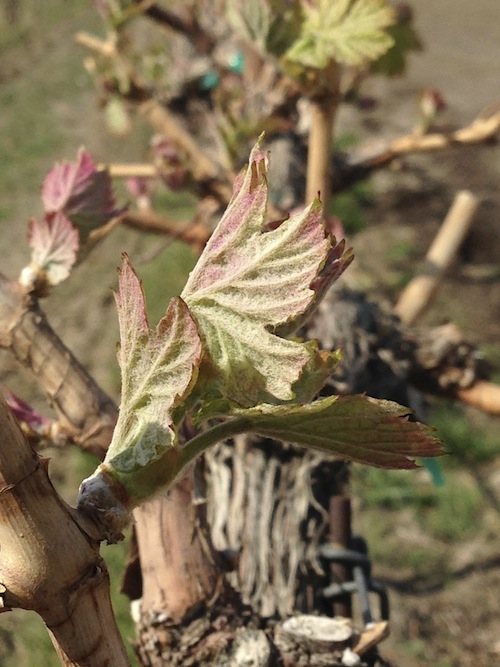 Grape growers will do everything they can to protect their vines’ tiny leaves between now and Mother’s Day, when spring frost threats will end. (Photo by Andy Perdue/Great Northwest Wine)

In the Columbia Valley, Washington grape growers circle Mother’s Day on their calendar as the the traditional time when spring frost no longer is an issue. That’s still five weeks away, and that has growers nervous.

“I’m not going to hold my breath for five weeks,” Gamache said. “But I will be watching the weather forecast. It’s a wild ride, there’s no doubt.”

“We’ve been running wind machines on Scooteney Flats,” he said of his block near Sunset Road on Red Mountain. “We’ve been right around freezing. It’s my one site every year that I have to watch.”

He said that at his French Creek Vineyard east of Prosser, there’s still potential for damage. Fortunately, that vineyard is surrounded by orchards, whose growers are running heaters and wind machines, which helps.

Boyle said he checks the weather forecasts three or four times a day.

“I’m also doing a lot of praying,” he said with a nervous laugh.

Corliss has a lot to contemplate between now and the second week of May, since Ste. Michelle Wine Estates uses two out of every three grapes grown in Washington.

“It doesn’t matter when you start, you still have to get past Mother’s Day,” he said. “We have a long ways to go.”