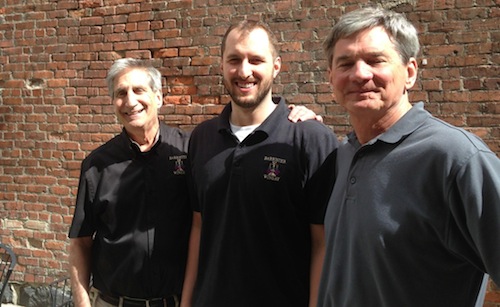 SPOKANE – Every year, more than 20,000 trains rumble through Washington’s second-largest city. And every one of those trains passes over Barrister Winery.

In the century-old former warehouse, more than 100 barrels rest below ground, and each of those trains gently vibrates the red wines resting inside of them.

One’s immediate reaction might be that this cannot be good for the wines, yet tiny Barrister Winery is making some of the best red wines in the state. And a study by three Korean researchers puts some science behind the art.

We recently caught up with Greg Lipsker, one of the founders and winemakers of Barrister Winery, and we talked about the trains, the growing wine scene and the fascinating story behind how a couple of lawyers ended up in the wine business. 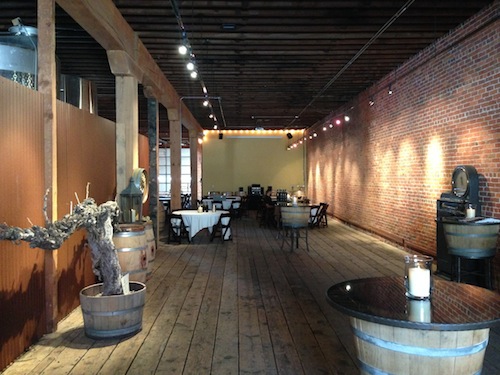 The spacious tasting room at Barrister Winery might never have been had the owners not been evicted from their first location. (Photo by Andy Perdue/Great Northwest Wine)

Lipsker and friend Michael White launched Barrister Winery in 2001 after their home winemaking hobby showed they had talent. The two lawyers decided to name their effort after the British term for an attorney.

Their first facility was a 1,500-square-foot space near Spokane Arena, but they were evicted three months after they opened their tasting room in 2003.

“You’d think that two attorneys could figure out how to write a decent lease,” Lipsker quipped. “But it was the best thing that ever happened to us. That’s how we found the space we’re in now.”

That space is 25,000 square feet with ample room for barrels downstairs and a tasting room and event area upstairs, all just a few minutes’ walk from the historic Davenport Hotel in downtown Spokane.

“We’ve been fortunate to find a tiny little vineyard that knew how to grow Cab Franc right,” Lipsker said. “At any wine competition, there are any number of wines that could win best of show. The stars just have to align for you. But the fact that we were fortunate enough to win those three years in a row got us noticed.”

While Lipsker and White started the winery, they’ve since been joined by Tyler Walters. All three collaborate on every part of the winemaking process. 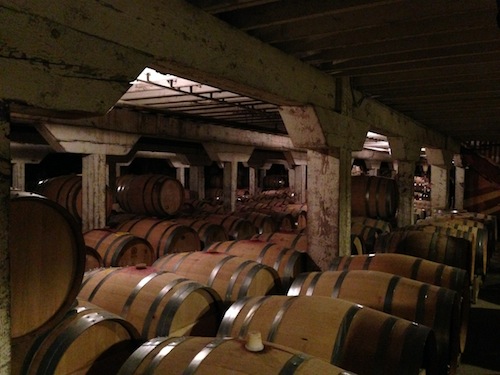 While high-quality grapes from Walla Walla and Sagemoor are the beginning of the winemaking process for Barrister Winery, those 22,000 trains per year that rumble overhead seem to make a difference and help Lipsker, White and Walters craft wines whose signature is smoothness and suppleness.

And it might never have happened had they not been kicked out of their first winemaking space.

Wineries use a system called “racking” to clarify their wines and introduce a bit of oxygen to their young reds. Basically, a wine is moved from one barrel to another using gravity rather than a pump. This allows a wine to be moved gently, leaving behind sediments that naturally fall to the bottom of the barrel.

At Barrister, the constant train traffic above the winery’s building helps with the racking process.

“Many wineries rack their wines three times,” Lipsker said. “We only have to once because the train vibration settles out the wines so efficiently. So by the time our Cabernet Sauvignon is released, it’s been gently shaken – not stirred – 60,000 to 70,000 times.”

Today, Barrister produces five different Cabernet Sauvignons, a couple of Merlots, as well as a Sangiovese, a Malbec and a Petit Verdot. All are gently aged by the constant train traffic overhead. And many are readily available throughout the greater Seattle area. 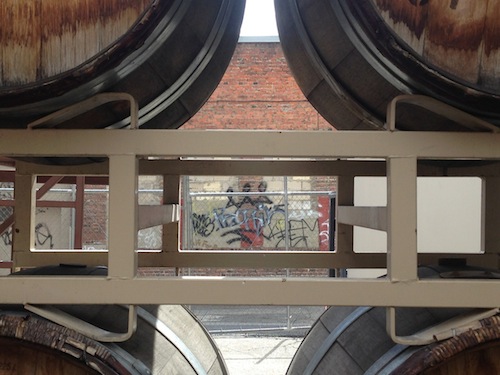 Barrister Winery is in downtown Spokane, an urban area that has been rough and tumble at times. (Photo by Andy Perdue/Great Northwest Wine)

Despite being in the state’s second-largest city, Spokane’s wine business has never seemed to pick up much traction. That is changing, Lipsker said. With 18 wineries and another nine tasting rooms, Spokane is starting to gain a critical mass needed to attract wine tourism. The recently formed Cork District focuses on downtown wineries.

“It’s exciting to see what’s happening,” Lipsker said. “We have a number of small wineries that are 500 to 1,000 cases that are making excellent wines.”

A vibrant food scene also is helping to transform an area that was pretty rough just a few years ago.

“It’s a really cool urban feel now,” he said. “It’s exciting to see what’s happening. The food scene in town is exciting and is keeping pace with what is happening in the wine scene. And it’s being so well received by the community and by the people who are visiting Spokane. They are blown away by what’s happening.”

If the state Legislature in Olympia ultimately passes a law that would expand wineries’ off-site tasting rooms from two to four, Lipsker believes that will be a boon for Spokane.

That’s already happening, as Walla Walla-based wineries such as Cougar Crest and Patit Creek have opened satellite tasting rooms within sight of the Davenport Hotel.

“I think in the next few years, we’re going to see a dynamic, growing, vibrant wine scene here in downtown,” Lipsker said. “It’s going to be a cool urban environment for the wine industry.”