That first toe-in-the-water effort was quickly gobbled up in the 17 states where the wine retailed for a relatively modest $40 per bottle.

As winemaker Brian Rudin prepares to bottle the Canvasback 2013 Cabernet Sauvignon in the coming weeks, he is tripling production. And he has enough 2014 wine in barrel to double it again – and even bottle a reserve-level wine.

We caught up with Rudin at Artifex, the custom-crush winemaking facility in Walla Walla where Canvasback is made. Here is the interview:

Rudin was hired as Canvasback’s first winemaker about a year ago, just as Duckhorn was preparing to plant its 20-acre estate vineyard on Red Mountain. He was on the team in time for the marketing to begin on the already-bottled 2012 and to complete work on the 2013 wines that were aging in barrel.

Rudin, who grew up in Wenatchee, Wash., and graduated from Western Washington University in Bellingham, completed his 10th Washington harvest last fall, including four vintages working with Red Mountain grapes as head winemaker for Cadaretta Wines in Walla Walla.

For Rudin, it’s a perfect opportunity to be working for Canvasback, arguably one of the most exciting developments in Washington wine the past two years. When the Duckhorn project was revealed in late 2013, the company was quickly approached by several vineyards that wanted to be involved. That continued to increase after Rudin came on board.

“I’m now sourcing from 15 different vineyards on Red Mountain,” he said. “And they’re scattered all over the appellation, which being such a tiny appellation is really exciting because it gives me a good variety of soil textures to pull from.”

Today, he’s using grapes from Klipsun, Ciel du Cheval, Heart of the Hill, Quintessence, La Coye and Shaw, among others.

“The level of talent on Red Mountain is staggering,” Rudin said. 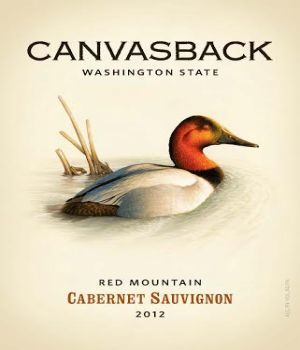 When the Canvasback 2012 Cabernet Sauvignon was released just after Labor Day last year, it vanished quickly, selling out in two months. Carol Reber, chief marketing and business development officer for Duckhorn, said the wines went into the company’s distribution pipelines to 17 states.

Some of the wine still is available in retail shops and on wine lists in those states (including Washington, of course). But it also sets the table for the 2013 Cabernet Sauvignon, which again will be released in early September. This time, the wine will be available in substantially greater quantities: about 7,500 cases.

“I’m really glad to see people have as much interest in the Red Mountain AVA and Washington state as they do with other Duckhorn wines that we’ve been producing for years,” Rudin said. “We were able to access very high-tier Red Mountain Cabernet Sauvignon, so I feel great that we were able to bring the production level up – but also bring the quality level up, as well.”

The 2013 release will be 89 percent Cabernet Sauvignon, along with 8 percent Merlot and a bit of Malbec to round it out.

“With Red Mountain, you get a lot of power and intensity and great bold flavors,” Rudin said. “So we look at Merlot as sort of the softening agent to the power and ruggedness of Red Mountain Cabernet.”

Building with the 2014 Canvasback

Rudin is particularly pleased with his 2014 wines, which are still resting in barrel at Artifex, where he has made wine for eight years.

“I’m stoked,” he said. “The grapes from ’14 were excellent. It’s all Red Mountain, so everyone’s really growing at a top-tier level. We were lucky that ’14 was a fantastic vintage.”

Rudin never got his hands on the 2012 wine before it was bottled, as it was made by the Duckhorn winemaking team that flew in regularly from Napa Valley to Walla Walla. And he was around only to complete the work that others started in 2013. But he was able to craft the 2014 from start to finish.

“Being a local guy, I feel like I’ve got some special insight on handling the fruit,” he said. “And ’14 is my chance to show what I can do and build on what we’ve already started.”

And while decisions on the size of the 2014 release are far from finalized, expect production to perhaps double again when that wine is released in fall 2016.

“We’ve gone from dabbling in our first vintage in 2012 to fully committed to Red Mountain,” Rudin said. “We’ve certainly stepped up to a mature scale of production.”

With such an increase, Reber thinks she should be in position to make Canvasback available in all 50 states when the 2014 Cabernet Sauvignon is released.

“It is our ambition to be a nationally distributed Red Mountain Cab,” she said. “It’s the right AVA for the right price point for the right variety.”

Rudin also is pining to create some separate bottlings, and it’s likely that he will release a reserve wine from the 2014 vintage a year from now, likely priced at $80 or higher.

Reber said Duckhorn’s wine club members will appreciate the opportunity to be among the first to try it.

“For luxury wine pricing, Napa Cab occupies this rarified air of more than $100 per bottle,” she said. “There is an opportunity in the $60 to $80 range where most luxury wine consumers live.”

What’s ahead for Canvasback

As early as next year, Canvasback will begin to harvest grapes from its 20-acre vineyard next to Force Majeure and across the road from Col Solare. It has 18.5 acres of Cabernet Sauvignon and Merlot planted, and famed Yakima Valley grape grower Dick Boushey is managing the vineyard.

“Dick is absolutely amazing,” Rudin said. “He’s one of the best farmers in Washington.”

When the vineyard is in full production, it will provide enough estate fruit to produce as much as 4,000 more cases. Duckhorn executives have long stated that their intention is to use the estate vineyard to increase production rather than replace current grape sources.

And as more wine grapes are being planted this spring on Red Mountain, Rudin expects more high-quality vineyard sources to become available in the years to come.

While Canvasback has been on the fast track to quality and success in its first three vintages, one thing it still lacks is a tasting room presence. Reber said that is unlikely to happen for at least two years. Ultimately, though, Duckhorn plans to close that loop in the not-too-distant future. Whether it will be on Red Mountain or in Walla Walla or Woodinville remains to be seen.