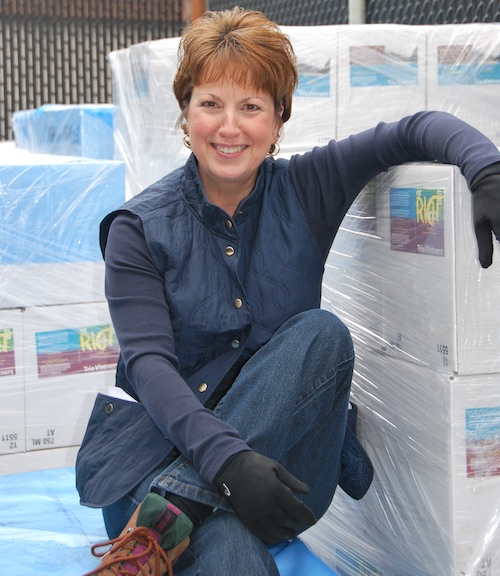 What she is dealing with now is forcing LaBonté to give up Trio Vintners and leave the Walla Walla Valley.

“Things could be a lot worse,” said LaBonté with her typical upbeat attitude. “I could be going through another round of chemo and fighting for my life.”

Instead, LaBonté’s hearing is quickly fading because of Ménière’s disease. She has lost all of her hearing in one ear and three-fourths of it in the other – all in the past three years.

“This is just my hearing,” she told Great Northwest Wine. “The future is unknown. I’m open to whatever God brings my way.”

This is how she has always approached life. 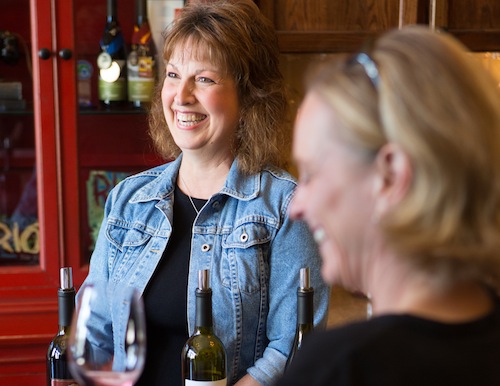 Regardless of life’s challenges, Trio Vintners owner Karen LaBonté has kept a smile on her face. (Photo courtesy of Trio Vintners)

LaBonté grew up in Yuba City, Calif., near Sacramento. Her after-school jobs included harvesting tomatoes, walnuts and almonds – tasks that taught her the value of an honest day’s work.

By 1983, LaBonté was working in the corporate world as an engineering director for Verizon Communications. That year, her son was born. Two months later, she was diagnosed with ovarian cancer. Then her husband bailed on the family, leaving her a young, single mom battling for her very life.

“It was one of those ‘ah-ha’ moments,” she said. “I was striking deals with God.”

From those dark times came a dream: becoming a winemaker. Between chemotherapy treatments, she met with a financial adviser to say she had three goals: put her son through college, retire at 50, and become a winemaker.

“He looked at me like I had a horn growing out of my head,” she said with an infectious laugh.

After beating ovarian cancer, she put her plan into action. Every raise, bonus and stock option went into her retirement portfolio. She eschewed the lifestyles of her fellow executives. While they bought second homes and Corvettes, she lived modestly.

Then the cancer returned. Undaunted, she beat it again and kept pushing forward. When it came back a third time, she was steeled for battle. It’s been 14 years, and she’s been clean ever since.

LaBonté’s corporate job took her from one end of the country (Manhattan) to the other (Honolulu). Along the way, she began studying winemaking at the famed University of California-Davis. By 2007, she was living in Everett, Wash. That year, she turned 50. Her son was finishing college, and she retired from Verizon – just as she planned.

She looked around to consider where she might enter the wine industry. She was pretty sure returning to California was not in the cards.

“To retire at 50 and launch a small winery, Napa and Sonoma are not ideal unless you have an overabundance of capital,” she said.

But she was familiar with Walla Walla, so that’s where she went.

The winery started in one of five incubator buildings at the Walla Walla Regional Airport that were built by the Port of Walla Walla. Eventually, Boushey left the operation, leaving Slattery and Michener.

By 2010, LaBonté had bought into Patit Creek Cellars, a winery that had started in the nearby town of Dayton in the 1990s and later relocated to the Walla Walla airport. When Trio came up for sale that year, LaBonté sold her stake in Patit Creek and bought Trio, becoming its sole owner.

By early 2013, LaBonté had opened a tasting room inside the Marcus Whitman Hotel, becoming one of six wineries pouring there. She made her wines at Artifex, a custom-crush facility not far away, and built her production to about 1,500 cases.

Life was good. During the prior 30 years, LaBonté had overcome incredible odds to beat cancer three times. Her son was a college graduate working in San Francisco. She had shrugged off the corporate rat race and was focused on her art. Her wines were superb, and she was building a clientele. When she bought Trio, it had 21 wine club members. Today, she has more than 350 rabid fans.

And they don’t want to see her go. 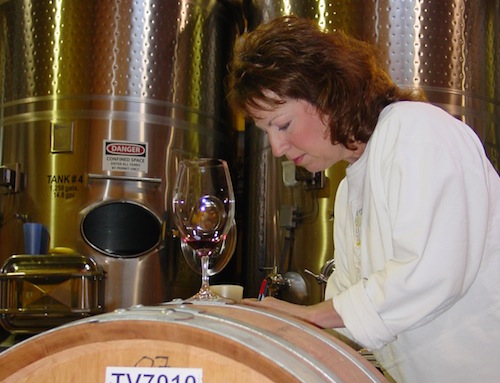 In 2012, LaBonté began to notice a problem. After a storm that included high winds and hail, she began to get dizzy.

“I was flat on my back,” she said. “I kept spinning and spinning.”

Finally, it went away. But she had another episode in 2013, and that began to scare her. After many tests, her physician diagnosed Ménière’s disease, which can cause inner-ear imbalance and ultimately hearing loss. She tried steroids, acupuncture and anything she or anyone else could think of. But her hearing continued to get worse.

Then LaBonté began to realize the episodes were occurring when a lot of pollen was in the air, such as late summer when Walla Walla Valley wheat farmers burn their fields to get rid of stubble. She also noticed that when she and her longtime partner, Darwin Turner, would go to their favorite spot on the Oregon coast, her head would clear and stop spinning.

“It’s damp there, and they don’t have pollens,” she said. “They don’t burn wheat fields. That’s what was triggering these attacks. I had allergies growing up in California, but it was never the full-on Ménière spinning attacks.”

LaBonté knew she couldn’t avoid Walla Walla, not when she was making wine here.

“You can’t spend half your time on the coast when you have wine in barrel,” she said. “If I want to go deaf, I stay here. If I don’t, I need to go someplace where it will slow down.”

Based on her health experiences through the past 30 years, LaBonté knows it could be much worse.

“My life could have been taken from me many years ago,” she said. “As a cancer survivor, you’re haunted with the thought that it will come back – especially when it has. I never thought about hearing loss. I try not to get too panicky about it because overall I’m a healthy person.” 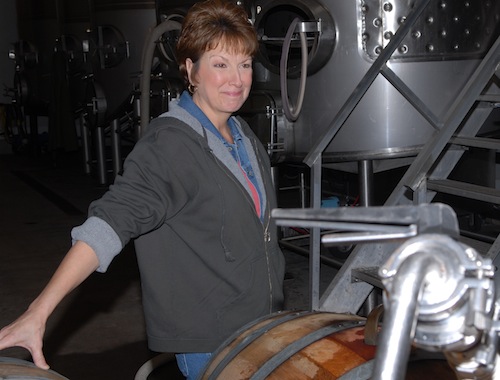 Karen LaBonté has no regrets about her decision to become a winemaker – and no regrets now that her health is forcing her to leave it behind. (Photo courtesy of Trio Vintners)

So LaBonté and Turner will be moving to the Oregon coast community of Cannon Beach. They bought property last fall, and now they’re getting their affairs in order here in Walla Walla, where Turner has a successful graphic arts business.

She has no thoughts of moving Trio Vintners away from Walla Walla, though she would sell the business if she found the right buyer. Otherwise, she will sell what wine she has left and move on to the next phase of her life.

On April 2, LaBonté sent an email to her wine club, letting her most loyal customers know what was happening. She had 800 cases of wine left in inventory and figured she could sell them by August, when she planned to leave town before the field burning began.

“Based on the response, I’m not going to be here in August,” she said with a laugh. “I might not be here in June!”

While the thought of leaving behind the wine business and the Walla Walla Valley brings LaBonté to tears, she will do what she has always done.

“This has been a gift,” she said of her time in the valley wine business. “There are no regrets. I am very glad I did it. I can’t imagine being one of those folks who thinks it’s too risky. Had I not had the courage to do this, that would have been the tragedy.”

If living on the Oregon coast does indeed slow her hearing loss, LaBonté figures she’ll have at least another year before the deafness is complete. Perhaps she will be able to get a cochlear implant. She isn’t sure, but she certainly isn’t too concerned.

“We have a lot of callings in life,” she said. “As much as I thought this was my final one, you can’t predict life. I know that more than the average person.”