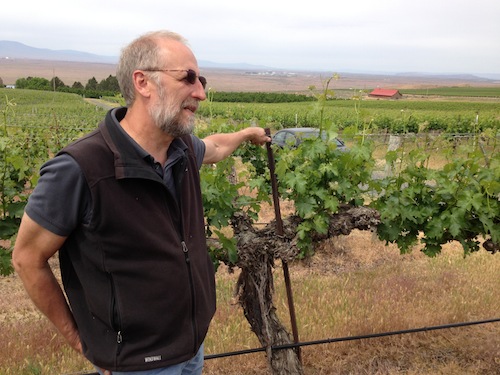 The first big day on Washington grape growers’ calendar is expected to pass without incident – and that makes everyone in the state’s wine industry happy.

Mother’s Day is the traditional last day of spring frost season, and according to weather forecasts, no frost is in sight for the next two weeks – and beyond.

“I’m pretty darned confident,” said Kent Waliser, general manager of Sagemoor Vineyards north of Pasco and on the Wahluke Slope. “Looking at the forecast, you’d have to feel pretty confident that we’re off and running.”

So far, the 2015 vintage is off to an amazingly warm and dry start.

“We have 120 days to go (until harvest begins), so we don’t know if the rest of the summer will be as warm,” Waliser said. “Right now, we’re tracking ahead of last year.”

Every year, Washington grape growers and tree fruit farmers use Mother’s Day as an indicator of when they can let out a collective sigh of relief and stop being concerned about spring frost damage.

“I always go by Mother’s Day,” said Mike Sauer, owner of Red Willow Vineyard in the western Yakima Valley. “The first week or so of May can be touchy.”

“So far so good,” he told Great Northwest Wine. “The forecast looks pretty good. I haven’t had any damage from spring frost. It’s been a pretty nice spring. Things are growing, and we have a lot of work ahead of us.”

Mike Sauer, owner of Red Willow Vineyard, is happy with the 2015 vintage so far. (Photo by Andy Perdue/Great Northwest Wine)

All indications are that Washington vineyards are ahead of the historically warm 2014 vintage. Waliser said he will be picking sweet cherries in May rather than the first week of June, which is his first marker for a warm spring.

Waliser noted that growing degree days – a measurement of how warm a season is – are a bit deceiving this year because they are tracked begin April 1, and March was warm enough that some heat was already accumulating before April 1.

Sauer said that in late March, his vineyard was ahead of normal, then a cool first part of April put everything back to average. Now, he figures he’s 10 days ahead of the average and probably a week ahead of 2014.

“Everything looks good,” he said. “Last year, we had a bit of winter injury. This year, we’re looking better. I’m starting to send crews through for shoot thinning.”

Andrews figures he is a good two weeks ahead of normal.

“But who knows what normal is?” he said with a chuckle. “We have Chardonnay out that’s 14 inches long. Some years, we’re just barely pushing out a half-inch to an inch by this point. But it all depends. Mother Nature can always change things on you.”

Wade Wolfe, owner and winemaker for Thurston Wolfe in the Yakima Valley town of Prosser, walked through some of the vineyard blocks he works with in the Horse Heaven Hills.

“Personally, I didn’t think we were that far ahead,” he said. “We’re maybe 10 days ahead, if that much. That’s not an extreme level,” he added, noting that areas of California and Oregon are as much as a month ahead of the long-term averages.

Wade Wolfe, owner and winemaker of Thurston Wolfe Winery in Prosser, Wash., also is a former viticulturist for Chateau Ste. Michelle and Hogue Cellars. He walks through a vineyard in the Horse Heaven Hills just prior to harvest. (Photo by Andy Perdue/Great Northwest Wine)

Vineyard owners are happy to be ahead of normal and are unconcerned about being too warm at this point.

“I was just driving through Mattawa (on the warm Wahluke Slope),” Waliser said. “Everything looks even and green. I saw no frost damage in our vineyards and no winter damage. With this warm weather, it’s just amazing how fast everything is starting to grow.”

Andrews is pleased with the fast start.

“The vines getting too far ahead is not a concern,” he said. “Things balance out as the year goes along. If the weather stays nice, by the first of July we’re setting ourselves up for an earlier harvest.”

Andrews grows primarily red grapes, most of which go to Ste. Michelle Wine Estates. Sometimes, his Cabernet Sauvignon won’t be harvested until Halloween – or later.

Andrews also has been planting this spring. He put in 180 acres, primarily Cabernet Sauvignon, and the warm weather has been a tremendous help, as he already has a foot or more of growth from the young vines.

“It’s been a really nice spring for our vineyard so far,” he said. “It’s only early May, which is hard to believe. It feels like it’s the end of May.”

Unlike other areas of Washington – particularly the Yakima Valley – Andrews is unconcerned about getting water. His vineyards are irrigated by deep wells, so he is not directly reliant upon rivers or snow pack.

“It doesn’t impact our well water,” he said.

He said the water table drops slightly over time, and that might be an issue for the next generation of his family that will farm the area, but he is not concerned about the 2015 vintage.

“We have water for this year,” he said.

Andrews did note that because the winter was so mild, there might be issues with pests.

“Insects could be a problem,” he said. “But we’ve also been dry, so mildew hasn’t been a problem. The weather has been ideal for our vineyards”