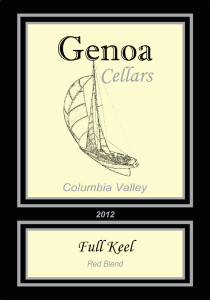 Many of the blends developed by Derek Berger and Scott Heinrich include Sangiovese, but here’s a more traditional blend of Cabernet Sauvignon and Merlot. It replaces their Even Keel (a 50/50 blend entirely from Red Mountain), and Full Keel leans toward Cabernet Sauvignon (70%) with contributions from Boushey Vineyard as well as Williams family sites Heart of the Hill and Kiona vineyards on Red Mountain. The 22 months in all French oak elicit aromas of toast, mocha and sweet spices with lots of blueberry, anise and minerality and tar. On the palate, the profile focuses on ripe raspberry, black cherry and more blueberry with mouthfilling tannins. Suggested pairings include strongly flavored meats such as rack of lamb, venison and peppercorn steak. The two winemakers now divide their attention between two tasting rooms as they joined several other wineries in the Hollywood Hills while also maintaining their slip in the Woodinville Warehouse District.