SUNNYSIDE, Wash. — Côte Bonneville winemaker Kerry Shiels left Nepal shaken yet full of appreciation after experiencing the deadly April 25 earthquake, and now she’s assisting those trekking guides and porters who helped her along during a 12-day adventure tour.

Reporters, TV cameras, hugs from family and tears of relief greeted Shiels after the Yakima Valley vintner emerged from customs at Seattle-Tacoma International Airport. But even before she left Kathmandu, the University of California-Davis grad launched a fundraising campaign for one of her Himalayan guides.

“It’s heartbreaking to think about,” Shiels told Great Northwest Wine. “Here is this 26-year-old guy who is amazingly positive, well-educated and forward-thinking who lost homes both in his village and in Kathmandu. And he said, ‘We will not be able to recover in our lifetime.’

“A lot of these villages you have to port into because there are no roads,” she continued. “And now after the second earthquake (May 12), there are these landslides. You can’t even walk there, so they are cut off from any sort of aid. Nobody is going to be able to help them.”

Shiels realized almost immediately how fortunate she was when the quake struck at 12:30 p.m. local time.

“I had just come back from a five-day trek that finished on Friday in the Annapurna region, so Saturday we were back in Pokhara,” Shiels said. “Two of the people on the trip were going to get married Saturday afternoon, so we were all in the lobby of the hotel getting ready to go to this wedding when the ground started shaking.

“The locals and everybody bolted outside across the street to where there was an open lot,” she continued. “I could not have been in a better place when this happened. The epicenter was halfway between Kathmandu and Pokhara. That’s only about 45 miles.”

Shiels, 35, witnessed the devastation of Kathmandu the next day — a city she found so welcoming on the first day of her trip. By this point, however, the earthquake left Kathmandu in chaos as she and thousands of others filled the airport desperate to return home.

“It was a real adventure, and these guys were great,” she said of her guides. “They were fantastic before the earthquake, and the fact that they continued to take care of us after the earthquake was above and beyond. I never had to go to the (U.S.) embassy. I never went to the Red Cross. The Peace Corps had an area that I knew about, but I never went there because we had so much help from the locals.”

Her trek via Earthbound Expeditions began in earnest April 17 with sightseeing in the Kathmandu Valley, followed by rafting the Trishuli River. Earth Day arrived in the midst of her tour through the Annapurna region.

On April 25, in the middle of the Yakima Valley’s spring barrel tasting weekend, the Northwestern University grad used her Twitter account to let her parents know about the earthquake and her condition. The message arrived during the wee hours of the morning in Sunnyside.

“Doing ok after the big earthquake in Nepal! Pokhara isn’t as badly hit as Kathmandu, so we’re safe,” she posted.

Had it not been for the wedding of friends she’d met on the trek, Shiels likely would have been in Kathmandu to cap her first trip in more than a decade that didn’t involve wine business.

“I was so overdue for a long vacation, it was unbelievable,” she said. “My mom had been giving me grief about going on vacation at this time of year. Well, she was, but now she’s not any more.”

Ironically, Shiels experienced a large earthquake in 2010 as a harvest intern at Tapiz in Argentina. She describe that quake, centered in Chile, as if someone were shaking the bed.

In Nepal, “the ground was rolling, like being on a ship in heavy seas — but faster,” she said. “It’s a surreal experience for someone from a very geologically stable area.”

1 hour of sleep in 2 days after earthquake

Aftershocks prevented her for getting any sleeping Saturday night. A six-hour, 100-mile bus ride to Kathmandu and the chaos of trying to get a flight home out of Tribhuvan International Airport didn’t afford Shiels more than an hour of sleep that day. On April 27, a lifetime and 10 days after she arrived in Nepal, she got a flight connection.

Remarkably, her departure from Kathmandu was a mere three hours later than the original itinerary.

“I could not have gotten any luckier,” she said. “There were so many places where if it had been a day earlier or a day later, it would have been completely different.”

Before Shiels even made it home, she began to help two of the local guides who led her through Nepal and looked after her. Within hours of the earthquake, she created a crowdfunding site to raise money for guide Namaraj Sapkota and his village of Dhading.

In less than a month, more than 70 donors have helped Shiels get more the halfway to the $10,000 goal for Sapkota.

“All the houses were destroyed,” Shiels said. The May 12 quake toppled more buildings and gutted the Dhading school.

She’s also using the Côte Bonneville website to help promote the GoFundMe.com site for Pravin Pabi. The campaign for his remote village of Phulkharka stands at $3,565 just 13 days after Shiels launched it. Pabi is the 26-year-old who also lost his Kathmandu home.

“They were so shell-shocked,” Shiels said. “Besides, they have so much else to worry about.”

Active Hearts Himalayas, a New Zealand-based group working on behalf of the Nepalese in a similar spirit to that of famed Kiwi climber Sir Edmund Hillary, took up the cause for another guide’s home village of Setobaje.

“The level of networking and communication that is happening through Facebook is really impressive,” Shiels said.

While Kathmandu is the most populated city in Nepal at 1.4 million, many of its residents grew up in mountain villages before moving to the capital in order to make a living and send money to their families back home.

“Really, the soul of the country is in rural, and everybody has their family in the hills and the villages,” she said. “When our guides and porters would call home, they would ask if their family was OK, and then they would ask about the animals and their village. And every single village was flattened, and their animals were all lost.

“These are subsistence farmers. They don’t have grocery stores, and it’s a month before the monsoon season starts,” she continued. “Not only did they lose their houses, they lost their food supply, and they lost the water buffaloes they use for plowing. They lost the water buffaloes they use for milk. They lost the chickens which they get their eggs from, so their ability to produce food is diminished. The terraces are absolutely beautiful, but the way they do agriculture is literally by-hand. All of that harvest is now lost. And that was their food supply.”

Shiels began to raise awareness by communicating with Côte Bonneville’s mailing list, and she also spreads her message through speeches she delivers to service organizations such as the Sunnyside Daybreak Rotary Club. Adding to her worries has been attending a funeral for an uncle as well as bottling her family’s wines.

“It’s been a crazy couple of weeks,” she said.

Funds donated to individuals will be put to work more quickly and avoid the risk of having the Nepalese government intercept relief dollars. There’s growing speculation that notoriously corrupt bureaucrats are siphoning money raised through international relief efforts.

“The government takes money and sends it off to Switzerland for their own personal use, which is just nauseating,” she said.

And while donations of food, clothing and other material goods are worthy ideas, logistics make it virtually impossible for those items to reach the village people of Nepal. Money is what matters.

“How do you get things there is the challenge,” she said. “They are starting to get corrugated metal from India and China then learning how to bend it so they use some sort of tarps on the sides to keep the water out — so at least they can make it through monsoon season and have some sort of shelter. You can’t start rebuilding until after monsoon season, but you don’t want to be living in a tent during the monsoons.”

Shiels said she came back more grateful than ever to be living in the United States.

“Yes, there are poor people in the U.S., but not like Nepal,” she said. “And it just made me sick to see what happened in Baltimore — destroying their own town.”

Rather than being shell-shocked, Shiels wants to continue celebrating life and appreciating the outdoors. A week after returning to Sunnyside, she joined friends and summited Mount St. Helens. Now, she’s planning to climb Mount Adams, the 12,281-foot peak to the west of the Yakima Valley. 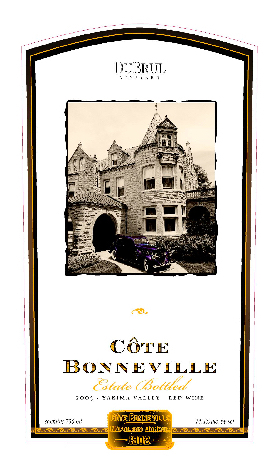 Soon, the acclaimed Côte Bonneville will be selling its inaugural Train Station Red, a blend Shiels and her family named as a tribute to their new downtown Sunnyside tasting room building — a structure that originally served as the first train station for the nearby town of Grandview. The new label will also help her friends in Nepal.

“A portion of the proceeds will be going to earthquake relief,” Kerry said. “The government is messed up, but the people are amazing.”

Shiels came home from her Himalayan trek mostly inconvenienced by the earthquake but certainly not unchanged. She’s hiked in the Alps and the Andes and the Cascades, both as a student at Northwestern and on company business while working in Europe for Fiat before she joined her parents in Côte Bonneville and DuBrul Vineyard in 2005.

“Tourism is a pretty significant part of the economy in Nepal,” she said. “The ways to help the country now are through direct donations — and then planning your trip. Otherwise, in addition to losing their homes and their villages, they will lose their businesses and their livelihoods.”

And tourists from the United States will find the dollar goes a long way in Nepal.

“You go to Nepal and you actually feel like you are making a difference in peoples’ lives — with just the purchase of a trinket” she said. “It’s amazingly humbling. There are Tibetan refugees selling things everywhere because there is no place for them in society. I wanted to buy a rug, but some of my shopping was derailed by the earthquake.”

Among her purchases was a set of prayer flags. Her father — retired orthopedic surgeon Hugh Shiels — insisted those should fly over DuBrul Vineyard, the source of the family’s 2006 Estate Cabernet Sauvignon that garnered 96 points from Wine Spectator. The star-studded list of wineries that combine to purchase about 75 percent of the fruit from their 45-acre vineyard include Betz Family Winery, DeLille Cellars, Owen Roe, Va Piano and Woodward Canyon. Grapes from the 2015 vintage, particularly the Chardonnay block, should be filled with even greater karma.

Next spring, before she and her parents bottle again, Shiels will be back in Nepal to support her friends by paying them to guide her on another trek.

“I don’t have the dates yet, but yes, I’m going back. Heck yeah! It’s amazing country. It’s not a hardship to help people out by going on vacation,” she chuckled. “The Himalayas have been on my bucket list forever. Aren’t they on everyone’s?”