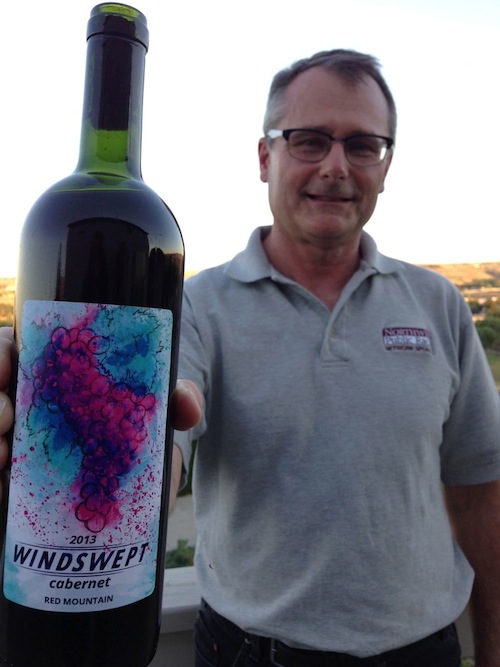 Mike Rinker of Kennewick, Wash., made the best amateur wine in the world at the recent WineMaker’s Magazine wine competition. (Photo by Andy Perdue/Great Northwest Wine)

KENNEWICK, Wash. – Washington winemakers have long known that some of the best grapes grow on Red Mountain. Now the amateur winemaking world is finding out, too.

Mike Rinker, an engineer who lives in the heart of Washington wine country, made the best amateur wine in the world this year — a Cabernet Sauvignon from Red Mountain grapes.

The competition was judged by wine professionals and attracted 2,825 entries from 49 states, six Canadian provinces and 10 countries, making it as large as most of the biggest professional wine judgings held around the world.

“I was really happy because I’d won four medals: three bronzes and a silver,” Rinker told Great Northwest Wine. “Toward the end of the banquet, they went through some higher-level awards. The very last award is the grand champion, the wine that score the highest. When they flashed that up, they had my name on it, and I was pretty much floored.”

The 500 amateur winemakers in attendance at WineMaker Magazine’s annual convention gave him a standing ovation — then asked for a taste of his winning wine. Unfortunately for them, those at his table had finished the bottle he’d brought to share.

News about Rinker’s victory is spreading quickly. Heather Unwin, executive director of the Red Mountain AVA Alliance, was able to taste the wine late last week at a private celebration with Rinker’s friends and colleagues.

Wes Hagen, a winemaker from California’s Santa Barbara County, was a keynote speaker at the convention, and he came away impressed by what he is tasting from the amateur ranks.

“From delicious Marquette from Montana to amazing Albariño from Arizona, this is truly a golden age for wine and winegrowing in the United States,” he said. “The Pacific Northwest is not an exception.”

Hagen is the brand ambassador and consulting winemaker for J. Wilkes Wines in Santa Maria Valley. During the convention, he provided winemaking tips to the home winemakers in attendance.

“From the rich, dense reds from the warmer regions of Eastern Washington to the nervy whites of the Columbia Gorge or the wines of place and vintage from the Willamette Valley, the Northwest is really rising right now.” 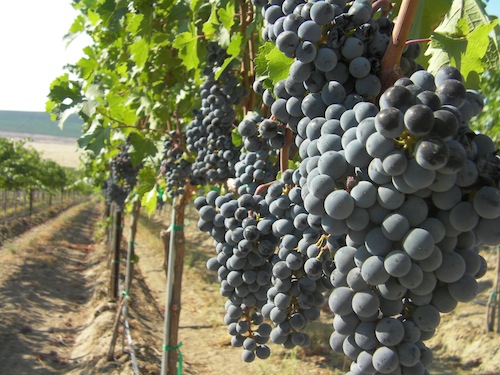 Red Mountain is famous for its Cabernet Sauvignon, as well as many other red grape varieties. (Photo by Andy Perdue/Great Northwest Wine)

Rinker began making wine in 1992, not long after moving to Washington. For about 20 years, he purchased grapes from a vineyard north of Prosser that was planted by George Carter, one of the pioneers of the Washington wine industry who worked for Washington State University as a researcher. Carter’s son Dennis was running the vineyard.

After Carter sold the vineyard a few years ago, Rinker found Redpath Vineyard on Red Mountain through the Washington Association of Wine Grape Growers. The vineyard is owned by Rob and Lisa Schwager of Snohomish and is managed by John Gomez.

“We were so excited to hear about Mike’s wine,” Rob Schwager said. “We couldn’t believe it.”

The Schwagers bought 5 acres nearly a decade ago, then bought the adjacent 5 acres a few years later. About 80 percent of it is planted to Cabernet Sauvignon, with the rest going to Merlot, Malbec and Cabernet Franc. It is just off Sunset Road near Frichette Winery.

They sell to about 10 winemakers, and they believe about half of them are home winemakers.

“You can’t make too much with 200 pounds of grapes,” he said. “It’s hard to find grapes in small amounts on Red Mountain. Most vineyards have a 3-ton minimum.”

Schwager said he likes working with home winemakers because they’re always so grateful.

“They always thank us,” he said.

Schwager is in the apparel business but decided to invest in a vineyard because he is fascinated by the growing Washington wine industry, which now contributes more than $10 billion a year to the state’s economy.

Schwager said anyone interested in buying grapes from Redpath Vineyard should email him. 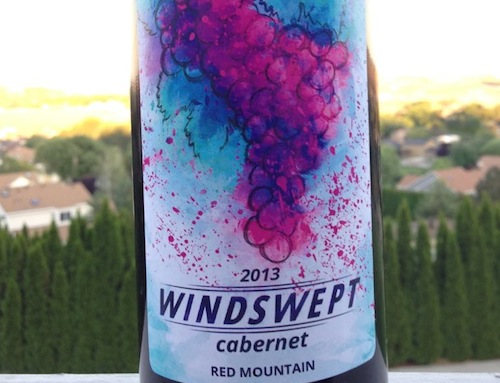 Mike Rinker labels his wines “Windswept Winery.” He isn’t sure what he would call his winery if he decided to go pro. (Photo by Andy Perdue/Great Northwest Wine)

Rinker originally had enough Cabernet Sauvignon to make 12 gallons of his award-winning wine. He used about half of that to make blends with Merlot and Malbec. He ended up with enough to produce about two cases of his top-winning Cab — and he has about a case left.

His Kennewick basement is filled with winemaking equipment, which is wife, Jan, happily puts up with as long as he continues to craft delicious wines.

During the Portland conference, he attended a seminar offering insight on how to become a professional winemaker — fortuitously before his big award was announced.

“I’m thinking about it,” he admitted.

First, though, he’s hoping his recent success will provide him with access to more grapes, and his goal this year is to make Merlot from five American Viticultural Areas within Washington.

Rinker said his background as an engineer aids him during the winemaking process.

“Having an analytical mind helps,” he said. “You look at everything meticulously. But there’s also a significant amount of artistry. That can be a struggle with someone who is an engineer.”