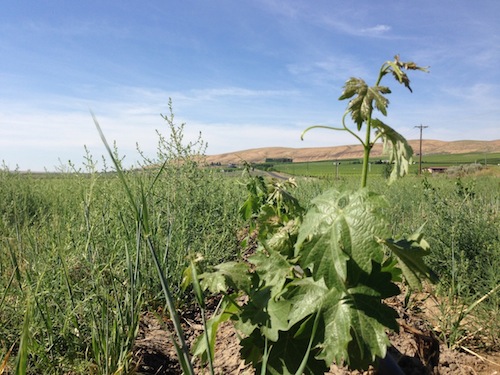 A newly planted vine in an Aquilini vineyard on Red Mountain is alongside Sunset Road. The Aquilini company in British Columbia is planting more than 500 acres of vines – nearly all red grape varieties – this spring on Red Mountain. (Photo by Andy Perdue/Great Northwest Wine)

Aquilini Investment Group of Vancouver, British Columbia, is in the midst of planting 545 acres of wine grapes in Washington’s smallest American Viticultural Area.

“We have 240 acres already planted,” said Barry Olivier, president of Aquilini Brands. “We have a tight window here, and we don’t want to be working too far into the summer. We want to work around our neighbors in an appropriate manner.”

In the next few weeks, 545 acres of Aquilini wine grapes will be planted.

In addition, the Aquilinis purchased a vineyard in the Horse Heaven Hills. So far, they have planted 250 acres that will be contracted to Ste. Michelle Wine Estates and have plans to plant an additional 300 acres this year – once the Red Mountain project is done.

The Aquilinis own vineyards in north-central Italy. The team that tends the vineyards in Europe are spearheading the plantings in Red Mountain and the Horse Heaven Hills.

On top of all the plantings, the Aquilinis plan to produce wine – on a sizable scale. 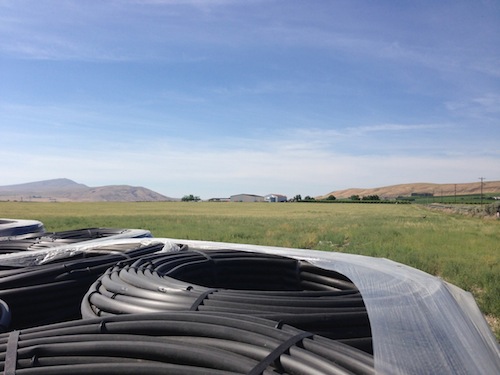 Hoses that will be used for irrigation hoses are stacked up alongside an empty field near Kiona Vineyards & Winery on Red Mountain. They will be installed after the vineyard is planted by Aquilini. (Photo by Andy Perdue/Great Northwest Wine)

Going into the November 2013 land auction, about two-dozen interested parties were looking at 31 separate parcels being sold by the Kennewick Irrigation District. Unbeknownst to representatives from such wineries as Kiona, Duckhorn, Betz, Upchurch and Hedges, the Aquilinis sent a representative to bid on the land – a plan that was hatched weeks before.

“We saw the brochure for the auction about six weeks in advance,” Olivier said. “We knew what we were going to do.”

By the end of the five-hour auction, it was apparent to everyone that the Aquilinis would not be denied. They spent $8.3 million for the 670 acres – an average of $12,388 per acre. By comparison, prime parcels on Red Mountain can cost as much as $50,000 per undeveloped acre, with an additional $20,000 per acre to plant.

The Aquilinis are new to wine and viticulture but not to agriculture. They have 2,000 acres of blueberries in British Columbia, making them the largest such growers in Canada. They also have large plantings of cranberries. In Washington, they own Aquilini Dairy near the Yakima Valley town of Sunnyside, a property they bought about four years ago. In addition, they’ve planted about 750 acres of blueberries near the Skagit Valley community of Sedro-Woolley with plans to put in another 1,000 acres this year near Everett.

The Aquilinis are led by patriarch Luigi Aquilini, who emigrated to Canada from Italy a half-century ago, and his sons Francesco, Roberto and Paolo. They are perhaps most famous for owning the Vancouver Canucks of the National Hockey League, along with the club’s home — Rogers Arena. 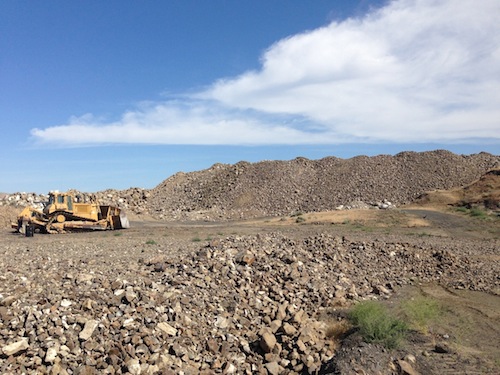 Earth-moving equipment stands ready for use in a former quarry on Red Mountain near Antinori Road, proposed future home of the Aquilini winery. (Photo by Andy Perdue/Great Northwest Wine)

With everything the Aquilinis are involved in, the Red Mountain project dominates discussions at headquarters in Vancouver.

“We talk about it every day,” Olivier said. “Everything is important. This is taking a lot of our time, and we’re very excited about the opportunity.”

When the Red Mountain land auction ended, many in the Washington wine industry speculated the Aquilinis would turn around and sell some or all of the land. But the Aquilinis quickly dispelled that by saying their plan was to plant vineyards. Upon that news, many wondered – and worried – what having a few thousand tons of new Red Mountain wine grapes on the market might do to prices and the region’s air of exclusivity and quality.

Olivier made it clear that while Aquilini will sell some of its grapes, it also will keep a lot for itself.

“We have a lot of interest,” he said. “We have no contracts – we haven’t gotten that far – but we will have a portion we will sell. We have aspirations to make a fair bit of wine.”

This is not Olivier’s first foray into the wine industry. He spent several years on the import side of the business, bringing small volumes of select producers into Vancouver, Calgary and Montreal. He’s excited to be back in the game.

In fact, the Aquilinis already have some wine resting in barrel. They bought a few tons of grapes last fall from Klipsun Vineyards on Red Mountain, with plans to buy about 20 tons this year and 40 tons next year. By that time, they will be able to start using estate grapes.

The first wines are being made by Charlie Hoppes, owner of Fidelitas Wines on Red Mountain. He is working closely with Napa Valley consulting winemaker Philippe Melka. So far, there is no name for a brand.

“We haven’t made that decision yet,” he said. “But there will be an Aquilini family wine brand at some point.”

The Aquilinis also are in the early stages of construction. On the south side of Red Mountain near the intersection of Highway 224 and Antinori Road, a former quarry is being transformed.

“Might it be a winery? I think that might be a very, very good guess,” Olivier said with a smile. “We’re talking to architects right now. We think that’s probably the most ideal spot for a winery.”