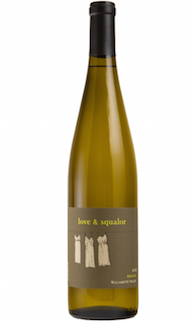 Matt Berson launched this edgy brand in 2007 under his Portland Wine Co., starting with a mere 65 cases. Now, he’s running at a clip of 1,800 cases, and this Riesling serves as a significant portion of his production. The dry-farmed vineyard sources include Brooks, which is poignant because the late Jimi Brooks helped mentor Berson, as well as other 40-year-old plantings such as Cuddihy and Sunnyside. Contributing diversity are Roncali near Eugene and Tunkalilla, the latter a younger site that joins Brooks Vineyard in the Eola-Amity Hills. Aromas of Ambrosia Salad, dried apricot, alyssum and dusty Granny Smith apple also pick up a pinch of spearmint. On the palate, there’s a marvelously dry and Grüner-like entry of Bosc pear, gooseberry, river rock and a touch of raw honey. Citrusy acidity more than balances the residual sugar of 1.3%, which reveals itself as a lick of Jolly Rancher Green Apple candy in the finish. Riesling geeks will appreciate the chemistry numbers of 9.7 TA, 2.92 pH and 10.6% ABV, and it slots in at “medium dry” on the International Riesling Foundation taste profile.