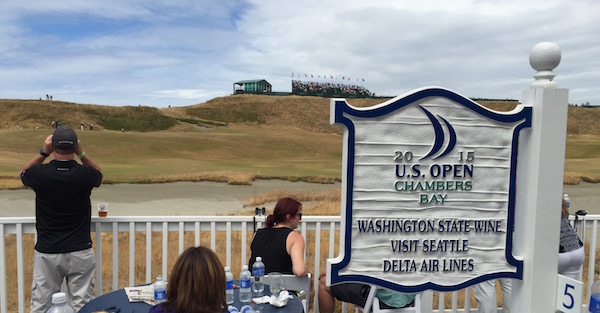 Guests of the Washington State Wine Commission can see action on No. 1 and No. 18 during U.S. Open week at Chambers Bay Golf Course in University Place, Wash. (Photo by Eric Degerman/Great Northwest Wine)

UNIVERSITY PLACE, Wash. — The U.S. Open Golf Championship is in full swing at Chambers Bay and — other than Tiger Woods failing to make the cut — the Washington State Wine Commission couldn’t be more pleased.

This week, the Washington State Wine Commission partnered with Visit Seattle and Delta Airlines on a hospitality tent along the 18th fairway to create a unique experience for buyers, corporate customers and wine journalists, and they are using 120 of the state’s top wines to help spread the word of the work being done by vintners throughout Washington.

“Here’s what I would do different — bring more white wine, more rosé and more bubbles,” Chris Stone, vice president of marketing and communications for the Washington State Wine Commission, said with a smile. “Rosé and anything white and refreshing has been flying off that bar. Obviously you can’t predict the weather in June in this region. We’ve been blessed this year with great, great weather.”

The unseasonable conditions this week in the Puget Sound helped introduce the wine commission’s guests to some of the state’s unique and under-the-radar wines such as San Juan Vineyards 2014 Estate Siegerrebe. It paired naturally with the poached salmon prepared by caterers. 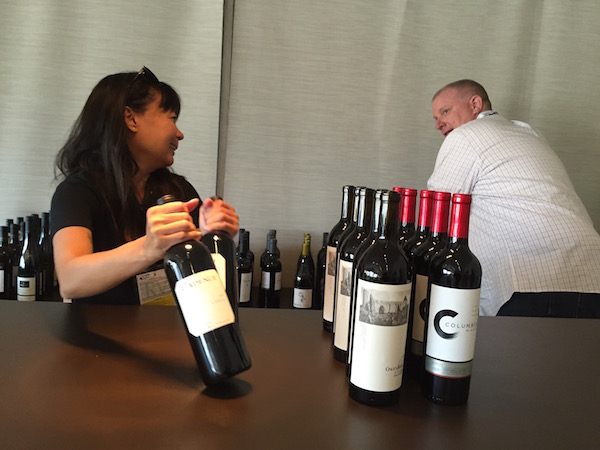 Monday’s practice round marked the beginning of the week of hospitality for Stone and the rest of the wine commission, which is scheduled to feature as many as 20 different wines each day this week. Earlier this spring, a group of Seattle-based sommeliers staged a blind judging of more than 400 wines submitted by Washington wineries to deter the 120 wines to be showcased at Chambers Bay.

“It’s tough in the respect that pretty much everyone does the same thing,” Stone said. “Whether you are New Zealand, Argentina, Chile, France, Spain — you put on wine tasting events, you take (influentials) out, you put bottles on tables, you do educational seminars. They are all good tactics, but whenever you get a chance to show who you are personality-wise as a region, who you are as winemakers and the diversity of styles you produce, this is a pretty darned unique venue in which to do so.

“It’s the most unique opportunity that I’ve had in my 10 years with the wine commission and 16 years in the wine industry,” Stone added. “It’s pretty cool.” 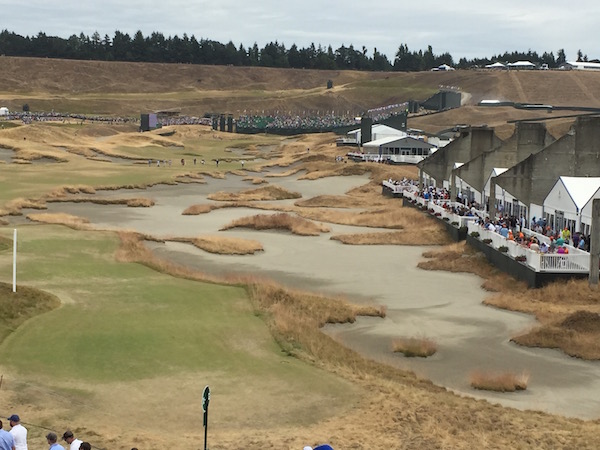 The Washington State Wine Commission tent at the 2015 U.S. Open is along the right side of the 18th fairway at Chambers Bay Golf Course in University Place, Wash. (Photo by Eric Degerman/Great Northwest Wine)

Pierce County transformed Chambers Bay, once one of the West Coast’s top quarries, into a links-style golf course that opened in 2007. Soon after, the U.S. Golf Association awarded it the 2010 U.S. Amateur and the 115th U.S. Open.

It is the first time one of golf’s major championships has been staged in the Pacific Northwest.

“This is all about relationship building,” Stone said. “There so many folks that we targeted to come, and we saw this as a unique hook for those who may not have otherwise come. These are people who have been/done that with so many wine tasting events, so this is a way to show them some love, to show them some hospitality and say, ‘Thank you for all you do to support Washington wine. Let us repay you.’ And hopefully, we will earn some love in return.” 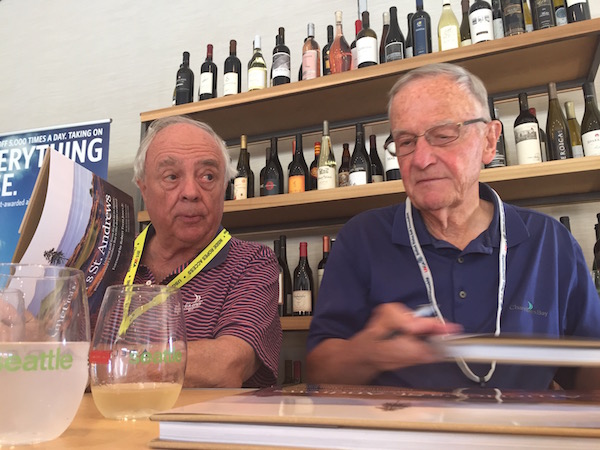 Some of those who have sipped wine at Tent No. 5 in Rainier Village came based on recommendations and reputations. On Wednesday, course architect Robert Trent Jones Jr., sipped on Leonetti Cellar 2012 Merlot while seated in front of the display of Washington wine. He and sports writer Blaine Newnham were signing copies of America’s St. Andrews, the quintessential book on Chambers Bay written by Newnham. They brought some star power to the tent, and Jones — one of the most famous names in golf — went straight from the wine commission tent to sit down for a live TV interview on ESPN.

“Wednesday was pretty rowdy in here,” Stone said with a smirk. “There was the book signing, and it was an energetic day. It was a little more rambunctious. Other people from tents were coming in, sharing things. It was a block party kind of feel.”

Among those Stone spent time with during Thursday’s first round was author Elisa Gaudet. She launched her Two Good Rounds series of books in 2011 with Two Good Rounds: 19th Hole Stories from the World’s Greatest Golfers. The most recent book by the former model/actress was written with golf great Ernie Els.

“We spent an hour and a half talking about this region and sports folks who have an interest in wineries or wineries who are big sports fans,” Stone said. “It was great. She has several books in the merchandise tent at this tournament that she’s written, and she told me that based upon what we talked about today, she was going to write a story tonight and then a more extended piece down the road. That’s very cool.” 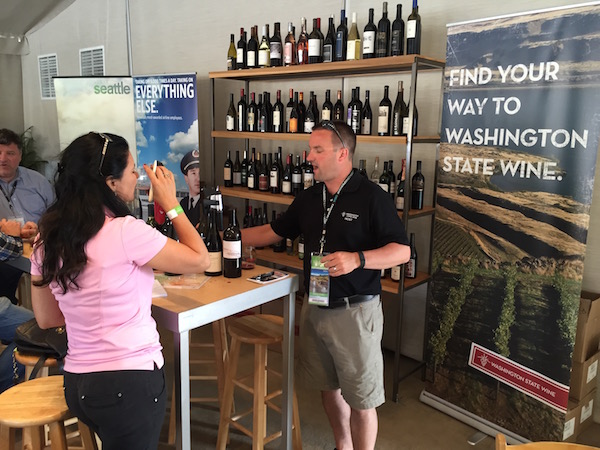 The success matrix won’t be immediate, but Stone is confident that it will be significant before the U.S. Open returns to Chambers Bay.

“So much of what we do is hard to measure immediately,” Stone said. “We don’t sell any wine. And our job at the wine commission is not to sell anyone’s wine. Our job to raise the awareness and increase the demand five years from now, and so much of that is about relationships and education. All day long, we’ve been doing nothing but telling the story of who we are as a region and hopefully showing people some of the great wines we have.”

Stone, an avid golfer who has played Chambers Bay several times, has been so busy serving as a wine ambassador that’s he’s not seen even a highlight from the tournament. As the final threesomes completed the first round of the U.S. Open, Stone understandably debated how he would spend Father’s Day — at home with his young son watching the final round on TV or back at Chambers Bay networking on the last day of the wine commission’s special marketing project.

“I think golf and wine is a pretty darned good crossover and meeting of interests,” Stone said. “For the most part, people who like golf probably enjoy wine a lot. At the commission, our primary audience is the trade and media influencers. To use this venue to get them to come out and enjoy themselves as our guests is just a cool opportunity that we probably won’t get again for who knows how long.”