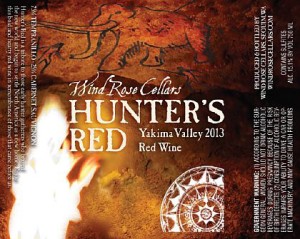 Olympic Peninsula winemaker David Volmut pays tribute to those who took down the mastodon in Sequim nearly 14,000 years ago, the remains of which were found in 1977. He’s created a meaty and robust “Super-Rioja” blend of Tempranillo (85%) and Cabernet Sauvignon. The influence of 25% percent new French oak sets the mood with aromas of light chocolate and filbert with sagebrush, dark cherry and plum. Its medium structure of plum, black currant  and blueberry carries lighter tannins and tangy acidity that’s perfect for London broil or game. Dark cherries and chocolate in the finish make for a pleasing farewell.