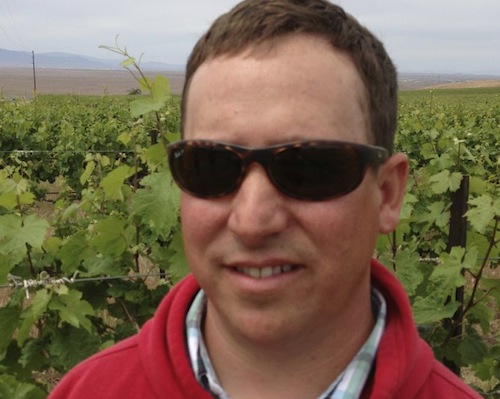 PASCO, Wash. – One of Washington wine country’s top vineyard managers is leaving North America for a grand adventure in one of the world’s emerging wine grape regions.

Derek Way, vineyard manager for Sagemoor Vineyards, will move to China this summer to become a wine grape consultant and also to work in the area of leadership training.

Way, who grew up in the Columbia Basin town of Moses Lake and went to Washington State University, has been the vineyard manager at vaunted Sagemoor since 2008.

Sagemoor was Washington’s first large-scale vineyard when it was planted in the early 1970s. It consists of four vineyards: Sagemoor, Bacchus, Dionysus and Weinbau. Sagemoor, Bacchus and Dionysus are on the east side of the Columbia River, while Weinbau is on the eastern end of the Wahluke Slope.

Prior to coming to Sagemoor, Way spent seven years with Ste. Michelle Wine Estates, including time as a viticulturist in the Horse Heaven Hills.

Replacement in place at Sagemoor Vineyards 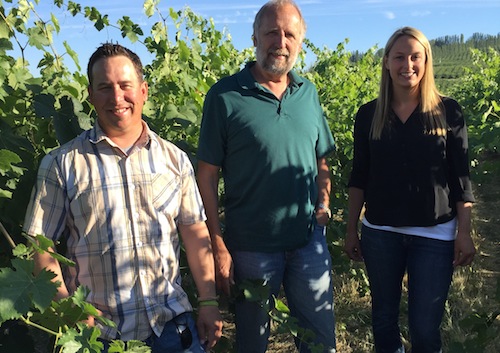 Lacey Lybeck, right, is transitioning into becoming the vineyard manager for Sagemoor Vineyards north of Pasco, Wash. She will be working with General Manager Kent Waliser, center, and taking over for Derek Way, left, who is moving to China. (Photo courtesy of Sagemoor Vineyards)

Ken Waliser, general manager for Sagemoor Vineyards, announced Monday that he has hired Lacey Lybeck to succeed Way. Lybeck, also a WSU graduate, most recently worked as senior viticulturist for Milbrandt Vineyards and the Wahluke Wine Co. in Mattawa. Prior to that, she worked as a vineyard technician for Ste. Michelle Wine Estates and has experience in France and New Zealand.

Lybeck will start July 1 at Sagemoor Vineyards and work alongside Way for a month before he heads to Asia.

“We’re pretty fortunate,” Waliser said. “We’ve found somebody we’re excited to bring on board. She’s very engaging and bright. We are fortunate to have a month of her time completely overlap with Derek.”

Waliser said he and the industry will miss Way, but he is excited about Way’s path forward.

“I’ve known Derek for eight years, and I’ve watched him have kids,” Waliser said. “It’s neat to see where he is going.”

Way will be moving to Nanjing, a city of 8 million that is home to about 600,000 university students. He will be moving there with his wife and their three children, ages 6, 3 and 1.

“This was a family decision,” he said. “My wife has been there twice with me and is super excited.”

They leave in September and have committed to being there for at least four years. Way will focus on language learning before he dives deeply into viticulture and leadership training.

He is heading to a country that is now No. 2 behind Spain in total vineyards planted at nearly 2 million acres.

“There’s a lot of opportunity there,” he said.

The past 15 months have seen significant changes at Sagemoor Vineyards. In April 2014, the vineyard operation was sold to Allan Brothers, a longtime apple grower in Naches.

Sagemoor’s history dates back to 1968, when Washington wine pioneer Alec Bayless put together a group of investors to purchase the original land along the Columbia River. The first vines were planted in 1972. At the time, there were just two wineries that were in a position to purchase grapes: Chateau Ste. Michelle and Associated Vintners (now Columbia Winery).

In the first two years, the partners planted 450 acres and continued to expand. Today, Sagemoor Vineyards consists of 883 acres of wine grapes, 230 acres of cherries and 190 acres of apples. The entire farm is about 1,300 acres.

The ownership change last year was the first in Sagemoor Vineyards’ distinguished history, and it went to a farming family that is in its fourth generation in the Yakima Valley.

Today, Sagemoor Vineyards sells to about 70 Washington wineries. Managing all the moving parts, especially during harvest, will be a big task for Lybeck.

“I am thrilled to join the Sagemoor team,” she stated in a news release. “I look forward to continuing the work by Derek and many others who have built the prestige of Sagemoor Vineyards.”

Miles Kohl, Allan Brothers CEO, said, “We put great effort into hiring the type of people who will drive our vision of providing world-class produce to our customers. Lacey Lybeck is that type of person. We have complete confidence the team of Kent Waliser and Lacey Lybeck will continue to expand the role of Sagemoor Vineyards in the premium Washington wine industry.”