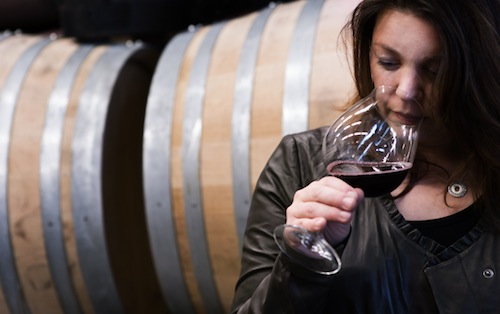 NEWBERG, Ore. – In the late 1960s, Dick Ponzi was a mechanical engineer in Los Gatos, Calif. He was successful, and life was good.

But Ponzi and his wife, Nancy, had an itch. They’d been to Burgundy, and they’d fallen in love with Pinot Noir. So they packed their belongings and headed north.

“They got started on a whim, like a lot of the pioneers,” said their daughter Luisa. “They decided they wanted to do something a little more close to the land, and they were in love with wine.”

That was how Ponzi Vineyards began 45 years ago. Today, the second generation of Ponzis is running the winery, with Luisa as head winemaker and Anna Maria as president and director of sales and marketing.

We recently got on Skype with Luisa Ponzi to talk about her family’s rich history in the Oregon wine industry. Here’s the interview: 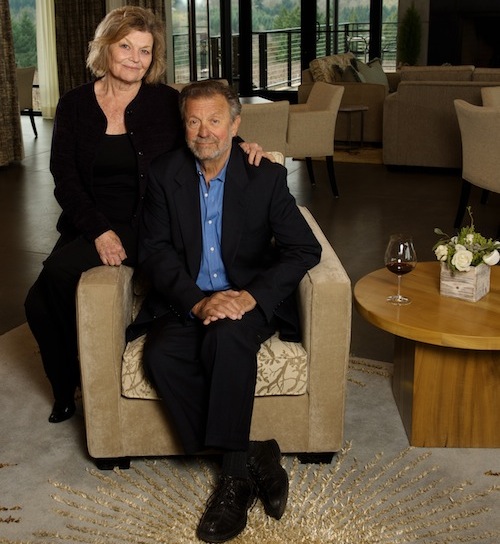 Nancy and Dick Ponzi moved their family from California to Oregon in the late 1960s to pursue a dream of making Pinot Noir. (Photo courtesy of Ponzi Vineyards)

The Ponzis came to the northern Willamette Valley after deciding the Santa Clara Valley was far from being an optimal location to grow Pinot Noir.

“They took some trips up and down the West Coast and really settled on this area of the Northwest and the Willamette Valley and felt this might be the place,” Luisa said. “So they dragged their three kids up here and planted a vineyard in 1970. That’s how it all started.”

At the time, the Oregon wine industry was in its infancy. Richard Sommers had set up HillCrest in the Umpqua Valley, while David Lett of Eyrie Vineyards, Dick Erath of Erath Winery and Charles Coury had already arrived in the Willamette Valley and were getting to work. Soon after, David Adelsheim of Adelsheim Vineyard, Joe and Pat Campbell of Elk Cove Vineyards and Myron Redford of Amity Vineyards followed.

“Others kind of trickled in that decade,” she said. “It was a crazy, crazy idea at the time.”

Dick Ponzi worked full time as a teacher for the winery’s first 15 years, primarily out of necessity to keep the operation going.

“I think they look around today in amazement at what has happened.”

Today, the Oregon wine industry is the country’s fourth largest, thanks to a focus on Pinot Noir and more than 500 wineries. 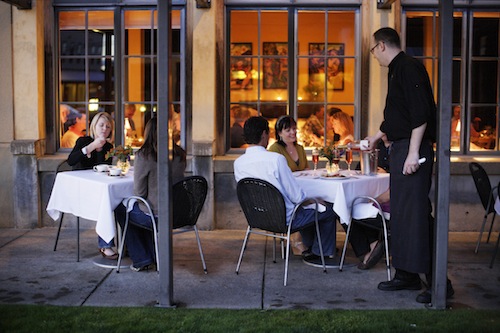 The Dundee Bistro on Highway 99W in Dundee, Ore., is owned by the Ponzi family. (Photo courtesy of Dundee Bistro)

While many of the early Oregon wine pioneers focused on growing, the Ponzis looked beyond the winery and tasting room to seek out what consumers wanted next. As a result, they plowed the road for more than one industry.

“That was another one that they had to lay the groundwork and pass the laws and do the work to make happen,” Luisa said. “That was a whole other adventure.”

After running it for a decade, the Ponzis sold BridgePort in 1995. Today, Oregon is home to 216 craft breweries, fourth-most in the country after California, Washington and Colorado.

Four years after selling the brewery, the Ponzis launched the Dundee Bistro, a fabulous restaurant in the heart of Oregon wine country. Today, the Dundee Bistro has a reputation for its wine list and farm-to-fork menu that is unsurpassed in Oregon and among the best in the Pacific Northwest.

“That was another adventure,” Ponzi said. “They just really recognized that the food part had to come along with the wine. We’d seen it take off in Portland, but at that time, the whole idea of local food, local wine was something to be explored.”

Growing up at Ponzi Vineyards 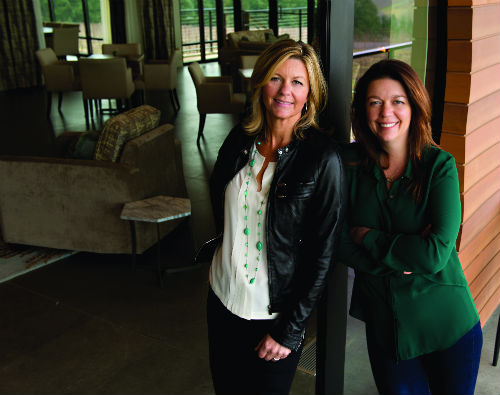 Anna Maria and Luisa Ponzi grew up working in the family winery. As adults, they returned to home and now run Ponzi Vineyards. (Photo courtesy of Ponzi Vineyards)

The Ponzi children’s experience growing up amid the vineyards of northern Oregon was often idyllic. The two sisters and their brother, Michel, regularly helped after school and on weekends.

“It was very much a family activity,” Luisa said. “We planted all the vineyards together. I helped in the cellar and tagged along with my mother as she tried to sell the wine in Portland. All that stuff was a great adventure as a small child.”

But as she entered her teenage years, having her last name on thousands of bottles of wines was acutely embarrassing.

“This was particularly strange because nobody else was doing this,” she said. “Nobody’s family was making wine. I didn’t got to school with kids who had families who made wine.”

Ultimately, this drove the three Ponzi children away from the winery for a few years. Anna Maria enjoyed a successful career on the East Coast in the magazine business before returning home in 1992 and putting her skills to work.

Luisa went to Portland State University, where she majored in biology as a preamble for medical school. But during this journey, she discovered that practicing medicine was not going to be in her future. Back at the family business, though, her science background was not wasted.

“I realized med school wasn’t going to be a great fit for me,” she said. “That’s when my father subtly suggested I come back and work the harvest.”

“He cleverly put me into the lab that vintage, and that’s when I realized that it wasn’t all manual labor. There was this whole science part of winemaking that I had never really seen as a child, and that struck my interest.”

She decided that if she was going to pursue winemaking as a career, she’d better get an education. This was a departure from her father’s experience, which was primarily on-the-job training. Luisa headed to Burgundy, where she earned a degree in viticulture and enology in the ancestral home of Pinot Noir.

In 1993, she returned home to Oregon and took over as head winemaker.

Michel is the only sibling who no longer works at Ponzi Vineyards. Instead, he lives in Italy with his family, where they own and operate an olive oil business. 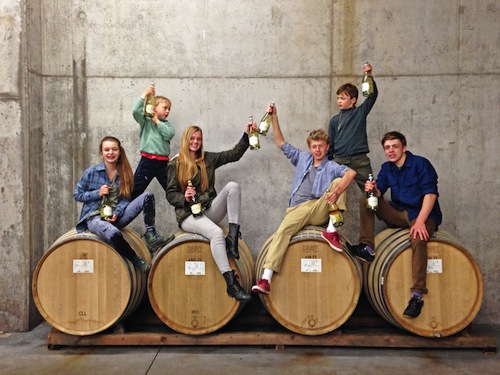 “When I first took over, I was kind of pushing the envelope on bigger wines, which I think is pretty common for new winemakers – to make big, impressive wines,” she said. “I find myself in the last five or six years going back to more of my father’s style, much more elegant, a lot brighter structure, longer tannins, looking for complexity in the wines as opposed to that big extraction of fruit.”

But plenty has changed, too. For example, she has grown Ponzi Vineyards from 16,000 cases in the mid-1990s to 50,000 cases today. She takes advantage of technology and vineyard sources her father never had access to.

And she works with fun and exciting grape varieties. In addition to Pinot Noir, Luisa is particularly pleased with the direction she has taken Ponzi Vineyards’ Chardonnay, which she believes rivals the quality of her Pinot Noirs. She also makes Riesling, Pinot Blanc and Muscat. And she loves to work with Italian varieties that harken to her family’s heritage. In particular, she makes Arneis, a rare white variety that grows beautifully in the northern Willamette Valley.

“It’s one that I wonder why more people haven’t planted because it does so well here,” she said.

Last year, Luisa produced a sparkling Gewürztraminer grape juice, a nonalcoholic product that can be enjoyed by anyone.

“Those are the little things that drive my sister crazy,” she said with a laugh. “It shows Gewürztraminer in all its loveliness without any alcohol. It’s really fun to make.”

Luisa was inspired by Navarro Vineyards in California’s Anderson Valley, which bottles nonalcoholic grape juices from Pinot Noir and Gewürztraminer grapes. At first, she made the product – called Cugini – with her four children and their cousins in mind. As it turns out, many customers have come to love the sparkling grape juice.

“It’s those people who are the designated drivers,” she said. “They don’t drink. They just want to come out to wine country. That’s a nice enhancement to the whole tasting room experience, to have something that is in a sophisticated bottle that you can serve in a wine glass. It’s a fun project.”

Of the eight Ponzi grandchildren, three of them graduated from high school this spring. Luisa isn’t sure yet who might be part of the third generation to run the winery one day. Based on her own experience, she is wary to push, either. Her son, for example, is going to work harvest for Rollin Soles at nearby ROCO Winery.

With eight grandchildren in the third generation, it’s unlikely all of them can come to work in the winery – or will want to.

“We have high hopes that somebody will come back,” Luisa said. “It’s going to have to be whoever has the biggest passion and gets the education and experience.”

Regardless, she is bullish on the future of Ponzi Vineyards.