The fifth annual Green Sports Alliance Summit begins Monday in Chicago, and innovative Stoller Family Estate is making sure the Oregon wine industry will be well-represented.

The award-winning winery in the Dundee Hills recently stepped up to become one of the event’s 10 sponsors for the three-day conference. Other sponsors include Aramark, BASF, Skanska and UPS, but Stoller’s presence in Chicago seems a more natural fit than some considering its longtime commitment to the environment and the quality of Melissa Burr’s wines.

“This is definitely a great opportunity for us,” said James Falvey, business development manager for Stoller. “We’ll be able to show these teams our fascinating wines that are sustainably produced, and the Green Sports Alliance Summit allows us to maximize that exposure. And while we tell our story, we’ll be able to hear what other teams and companies are doing, too.”

Membership in the Green Sports Alliance with a stated goal of sustainability includes 139 professional and college teams, 147 venues, 14 countries and 10 leagues. The group was founded in 2010 by Paul Allen-led Vulcan Inc., and the Natural Resources Defense Council, which began serving as an environmental consultant for North American professional sports leagues in 2004. 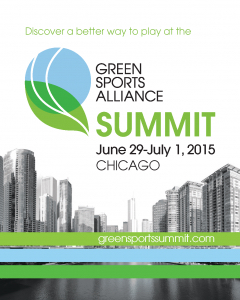 “Major sports venues and teams focus on hospitality now, and wine is always involved in that,” said Falvey, who joined Stoller in 2013 after spending a decade working for the Portland Trail Blazers. “We have a product that fits that need, and we have similar commitments to sustainability, so these are symbiotic relationships. We’ll be able to provide a bit of influence and leadership nationally with the products we are making while representing the Northwest at the same time.”

“They are expecting 800 attendees and about 70 exhibitors,” Falvey said. “It’s a big deal.”

Ironically, the keynote speaker is National Hockey League defenseman Andrew Ference, who starred as a teen for the Portland Winter Hawks of the Western Hockey League.

In 2007, Ference collaborated with Canadian environmentalist David Suzuki to establish the Carbon Neutral Challenge for the NHL Players Association. The title of his keynote address next week is Adding Street Cred to the Movement: The Importance of Authenticity.

Among the speakers and presenters are Carl Mittleman, president of Aramark Sports and Entertainment; Brad Mohr, director of stadium operations of the Cleveland Browns and FirstEnergy Stadium; Mike Richter, Hockey Hall of Fame goaltender; ESPN reporter/columnist Sarah Spain; and Will Witherspoon, who played 12 years as a linebacker in the NFL,

“Athletes involved in the Green Sports Alliance are not there just to be a celebrity,” Falvey said.

Stoller will be represented in the Windy City by president Gary Mortensen, marketing/communications manager Betsy Hannaford and Falvey.

“Stoller is going to be providing all the wine at the summit, and Gary will be given a couple of minutes at the beginning of one of the receptions to introduce the wines and talk about Stoller Family Estate,” Falvey said.

During the three-day summit, Stoller also serves as an exhibitor, so rather than pour wine, the team will answer questions.

“We’ll be talking about what goes into being a LEED Gold Certified winery, how our tasting room is a net-zero building and how we use sustainable practices in the vineyard to produce the wines,” Falvey said. “We’ll give people the unique look into the production of wine and how to do it in a responsible and sustainable manner.”

Wine Press Northwest magazine named Stoller Family Estate as its 2014 Pacific Northwest Winery of the Year, and the story of the 18,000-case brand is remarkable — with more chapters and more wine ahead.

Bill Stoller was born on the property near Dayton, and he began to transition it from a turkey farm to grape vines two years after purchasing it from a cousin in 1993. The estate now spans 373 acres, with 190 acres planted primarily to Pinot Noir and Chardonnay.

In 2006, Stoller constructed the world’s first LEED Gold Certified winery. It’s also believed to be the first winery in the Pacific Northwest to produce solar energy, and the 4,000-square-foot tasting room Stoller opened last year operates on 100 percent on its own solar power.

“Everyone involved with the Green Sports Alliance is doing so because they want to be leaders and at the forefront of being green, being sustainable and incorporate those concepts with the arenas, the teams and fans,” Falvey said.

Considering his background, Bill Stoller is a natural fit for the Green Sports Alliance. He played varsity basketball at Pacific University in nearby Forest Grove, Ore., and his support for the Boxers extends to a 2,500-seat athletic facility, which was renamed the Stoller Center in 2010.

“Growing up in Portland, thinking about sustainability, the green movement and caring for the environment gets engrained in you,” said Falvey, who graduated from the University of Oregon’s vaunted sports marketing program. “I left the Blazers and hooked up with Stoller, which has been an awesome marriage.”

Stoller Family Estate’s relationship with the Green Sports Alliance began in earnest this spring when it took part in honoring the New York Yankees’ commitment to sustainability. Cory Davis, Stoller’s national sales director, represented the winery at a private ceremony at Yankee Stadium.

“It was exciting for us to be associated with the brand that’s so strong around the world,” Falvey said.