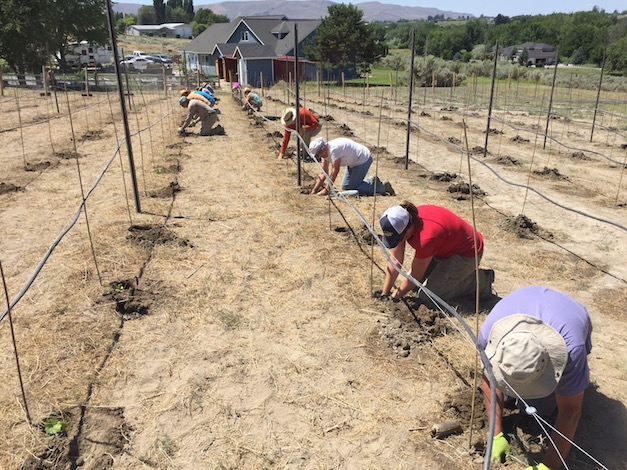 BENTON CITY, Wash. — For much of my life, the closest I’ve gotten to gardening on a Saturday morning involved 18 holes of replacing divots and fixing ball marks on putting greens.

On June 6, on the western shoulder of Red Mountain, I filled in three times that many holes with young and vulnerable Grenache vines. The 19th hole for this golfer didn’t loom on the horizon until after a constant and clumsy afternoon wrestling match with arm-loads of green grow tubes.

But now, a tiny part of me is invested in nascent Gifford Vineyard, across the Yakima River from Benton City.

Volunteers arrived to find trays filled with tiny Grenache Noir clone 01A plants ordered from nearby Inland Desert Nursery, which sat in the cool garage of Paul and Candace Gifford. The next step in the lives of each of the 1,275 plants would be made in the caring hands of the 10 volunteers who would soon pick them up and plant them in the sandy soil of the Yakima Valley American Viticultural Area. 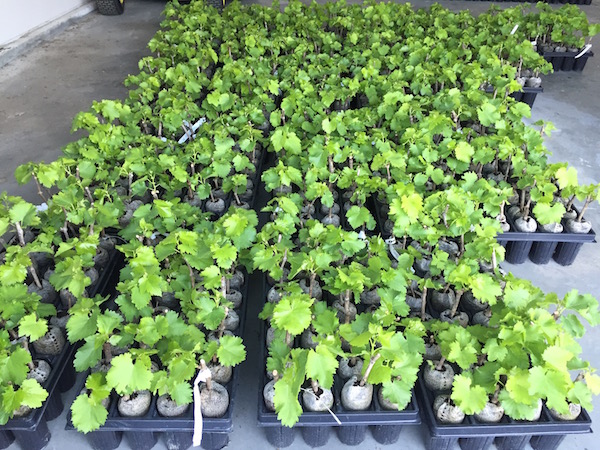 Greenhouse-raised Grenache Noir clone 01A rests in the garage of Paul and Candace Gifford before a busy morning of planting. (Photo by Eric Degerman/Great Northwest Wine)

This day marked phase II for the establishment of Gifford Vineyard. It began in May with the same amount of dormant clone 03 vines, while the clone 01A material about to be planted came from a greenhouse.

The Giffords ordered and paid for their vines last year, a sign of their commitment not only to their vineyard but also to this red Rhône variety. Some may scratch their heads at the thought of planting Grenache on Red Mountain, but it was a clear choice for Paul.

“I love Grenache,” he said. “I describe it as kind of like a Pinot Noir in that it’s lighter bodied — not heavy like a Cab — but it still has flavor and structure. When you drink it, you don’t feel as full, but you still get the mouth feel.”

Last year, Grenache commanded the highest average price per ton ($1,674) of any grape grown in Washington state — more than Cabernet Sauvignon ($1,448) and more than Malbec ($1,554). That doesn’t matter to the mild-mannered Gifford, who donned a T-shirt that read “Field Boss.”

“I love Southern Rhône varietals — Grenache and Mourvèdre — so that’s what I’m going to plant. And I hope to plant some Picpoul to help get more of a color set to the wine and add to the structure,” he said. “If everything works out, I also want to grow some Grenache Blanc so that I’ll have a white varietal.”

According to the plan, there will be 2.5 acres of Grenache, 2 acres of Mourvèdre, and a combined half an acre of Picpoul and Grenache Blanc. 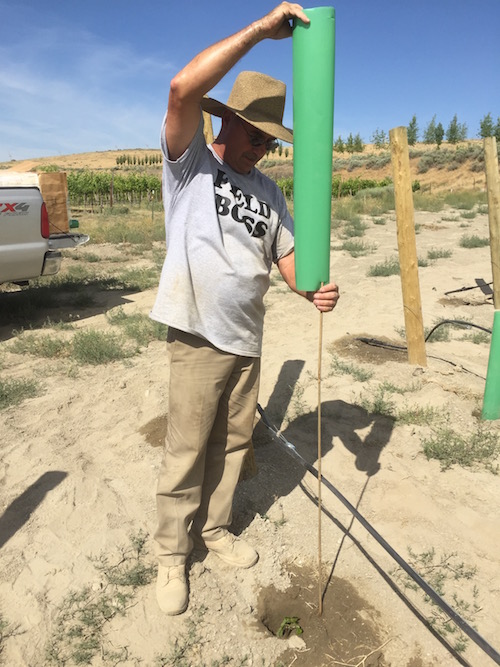 It took a doctor’s order to get Paul Gifford into wine, and it didn’t take long before he became immersed.

“I had high cholesterol, and he told me to start drinking it for my heart. That was about 28 years ago, and I started off with white Zin,” he admitted with a chuckle.

The Giffords have traveled to Europe for wine-country vacations, and they’ve been part of the Tri-City wine community for years, spending time behind the counter and pouring at events for wineries such as Gamache Vintners and Hightower Cellars. Paul works in the IT department for the city of Richland, while days for Candace are spent at the Hanford Site.

A few years ago, they purchased 6 acres just a stone’s throw below the boundary for the Red Mountain American Viticultural Area and above DeMoss Road.

Nearby growers help with planting, advice 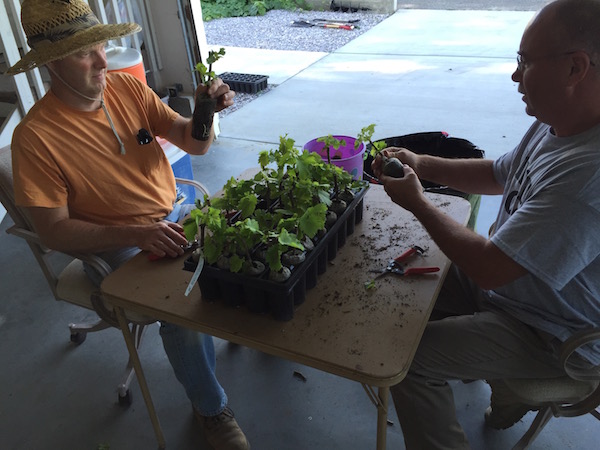 Grower/winemaker Ron Shackelford, left, and Paul Gifford inspect and trim young Grenache vines before a second round of planting at Gifford Vineyard on June 6, 2015. (Photo by Eric Degerman/Great Northwest Wine)

The Giffords’ planting is dwarfed by their neighbors. There are commercial vineyards for Dick Shaw, this year’s honorary grower for the Auction of Washington Wines, and Larry and Jane Pearson of Tapteil Vineyard Winery.

They’ve been befriended, however, not only by the Pearsons, who have family and rental homes within shouting distance of the Giffords, but also Ron and Anne Shackelford of boutique Shackelford Vintners.

The Shackelfords’ small vineyard is about a quarter-mile up the northwest shoulder of Red Mountain, but just a handful of their vines are inside the famous AVA. This spring, the Shackelfords drove over from Snohomish to help with both phases of planting Gifford Vineyard.

“There are a lot of nice people in the industry,” Paul said. “Dick Boushey helped arrange to have our property ripped three feet down, and then Dick’s crew came out and leveled it all out for us. It’s neat that someone like Dick Boushey will help out someone who is just getting started.”

From mimosa to digging in the dirt 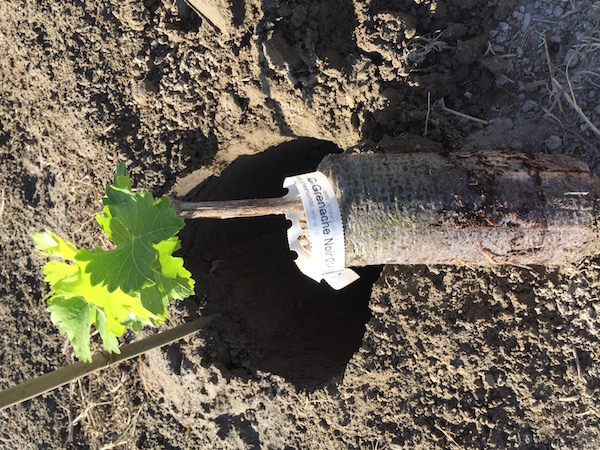 A young Grenache vine is about to be planted at Gifford Vineyard on June 6, 2015. (Photo by Eric Degerman/Great Northwest Wine)

This was phase II for planting Gifford Vineyard with the first half established in May, and there was already a small problem. The sticks in this latest delivery from Inland Desert Nursery were considerably less developed than the previous order.

“They are shorter than we intended,” Candace said. “It’s going to look kind of funky, but it’s OK. They all are looking healthy, and the roots are in pretty good shape.”

The Giffords allowed their volunteers to choose their jobs.

“We’re just going to do it in teams,” Candace told me. “Whatever you feel comfortable doing — digging or filling or a little bit of everything.

“Do you want a mimosa?” she then asked.

Some chose to bow their backs and dig the 12-inch holes in the mostly sandy soil. I chose to first get on my hands and knees for what initially appeared to be the easy job of dropping the baby Grenache vines into the holes that required a bit of backfilling because the plants weren’t quite as mature as the Giffords had hoped.

“But we’re in a lot better shape than last time,” she said. “We’ve got the irrigation on, so the emitters are running and the ground should be a little wet.”

I soon caught myself humming the melody of Digging in the Dirt by Peter Gabriel. Sunday morning, a part of the refrain — “Find the places I got hurt” — took on a new meaning. By Wednesday morning, the stiffness and soreness moved into the background, but in between was another small dose of the physical reality that field workers deal with on a daily basis. 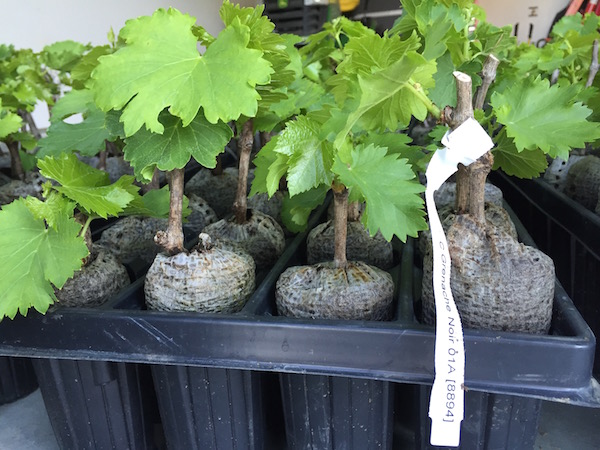 Grenache Noir clone 01A, grown on rootstock 8894, is about to find their permanent home in the Yakima Valley near Red Mountain. (Photo by Eric Degerman/Great Northwest Wine)

Gifford Vineyard now is planted to a density of 5 by 7 with the rows being 7 feet apart and vines growing every 5 feet.

That level of investment indicates just how critical it is for friends to follow through on their commitment to volunteer, regardless of the forecast of a 100-degree afternoon this day.

When I began to install the grow tubes, it became apparent why it’s important plant the vine near to the bamboo stake rather than in the center of the hole. The stake serves as the anchor post for the grow tube, and if the plant is too far away from the stake, the diameter of the grow tube can pinch the tiny leaves of the Grenache sticks.

Sunday morning, these detail-oriented, new almost-Red Mountain vineyard owners were back at it to check on their baby vines. They undoubtedly repositioned a few of the all-important grow tubes.

Dream of vineyard grows from compromises 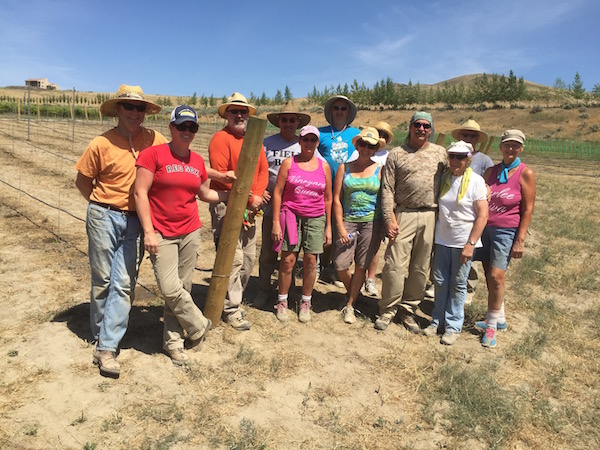 Candace has a soft spot in her heart for sparkling wine, and her brood of hens will help some with pest control at Gifford Vineyard, but the concept of a vineyard in Benton City wasn’t a quick sell.

“When we bought the property, I had this in my mind, but Candy didn’t want to move out here,” Paul said. “Then she saw the house and said, ‘I love it out here.’

“So I went in stages,” he continued. “I said, ‘OK, I want to plant grapes,’ and she said, ‘No.’ Eventually, she agreed to follow my dream — not hers — to plant grapes.

“The next thing is that she doesn’t want to make wine, but someday, maybe I will get that going,” Paul said with a smile. “We’re surrounded by vineyards and wineries, and everyone is willing to share equipment and their knowledge to help people get started.”

Gifford, who particularly admires the Grenache made in the Columbia Gorge by James Mantone at Syncline Wine Cellars, is taking viticulture classes through Washington State University’s extension program. Gifford Vineyard already is a member of the Washington Association of Wine Grape Growers Association, and Paul and Candace were on the guest list this spring for the Pearsons’ 30th anniversary party of Tapteil Vineyard Winery.

Ironically, the first phase of planting this spring at Gifford Vineyard coincided with the 30th wedding anniversary for Paul and Candace.

“That’s romantic — taking the wife out and letting her plant grapes on her anniversary,” Paul chuckled.