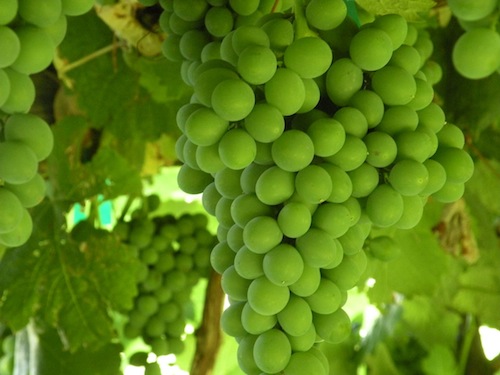 During high heat events such as what is happening this week in Washington’s Columbia Valley, grape growers are doing all they can to protect their vulnerable immature grapes. (Photo by Andy Perdue/Great Northwest Wine)

Across the 11 million acres of the Columbia Valley, Washington wine grape growers are scrambling to handle a heat wave unlike any seen in decades.

On Sunday, temperatures reached as high as 113 in the heart of Washington wine country, beating a record that had stood since 1987. Temperatures are expected to exceed 100 degrees for at least the next 10 days.

“This heat is testing everybody,” said Dick Boushey, owner of Boushey Vineyard near the Yakima Valley town of Grandview. “I’m not a fan of these super warm days.”

Boushey and other grape growers are struggling in several areas, including: 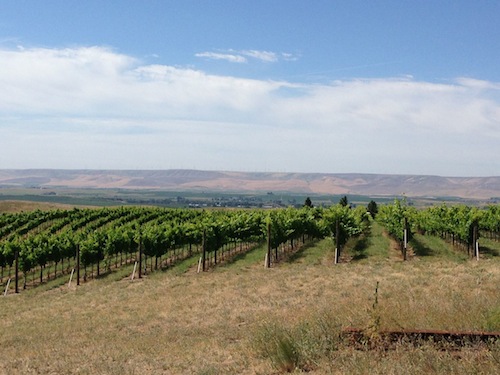 While most wine regions are measured by heat units, Boushey said that system is not useful when temperatures hit triple digits. Heat units take into account temperatures above 50 degrees, but when the heat rises above 95 degrees, the vine no longer ripens the fruit, and those heat units are not discounted.

“Those are lost hours,” Boushey said. “It’s not good for anything or anybody. Cooler years are actually more fruitful.”

Rick Small, owner of Woodward Canyon Winery in the Walla Walla Valley town of Lowden, Wash., explained that vines focus on protecting themselves when heat gets too high and no longer put any energy into maturing the grapes.

Some vineyards will run overhead sprinklers to reduce the temperature closer to the ground to mitigate the high heat. Some orchardists use shading, but that method isn’t used on grapes, Small said.

One issue is that grapes can become sunburned if they’re exposed to intense sunlight while the vines are shut down. Small said his crew went through and exposed the young grapes on some of his Cabernet Franc, unaware of the impending heat wave. When the grapes became sunburned, they quickly dehydrated, turned to powder and fell off the vines, he said. He figures he lost perhaps 15 percent of his crop in those blocks.

Mike Sauer, owner of famed Red Willow Vineyard in the western Yakima Valley, said that in years like this, it’s good for the vines to carry a larger canopy when possible.

Boushey said one method of providing protection is to let the canopy flop over on the west side of the vine to protect from intense afternoon sunshine, particularly after 2 p.m. He added that because of the temperatures, he is cautious about removing clusters, a method that usually can help the remaining grapes grow larger and more mature. He doesn’t want to risk sun damage to the grapes.

Boushey noted that some grape varieties handle the heat better than others.

For example, Syrah vines will shut down, and some of its leaves will turn yellow and fall off. Cabernet Sauvignon and Sangiovese, he noted, seem to handle the heat better. They might start to look wilted and unhealthy, but they bounce back quickly once the sun goes down. 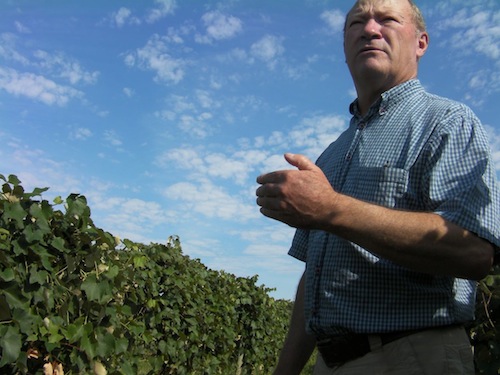 To keep the vines healthy, growers will water more often than usual during high heat events.

“We keep watering and watering, trying to keep up,” Boushey said. “But it’s almost impossible.”

Boushey talked as he checked on some of the 10 vineyards he manages on Red Mountain in the eastern Yakima Valley. He was supposed to be at a wine event in Seattle, but he came home to stay close to his vines.

“I’m afraid to leave,” he said. “I’m spending all my time moving water around – day and night. It’s hard to keep them wet.”

Sauer has the same issue. He is supposed to be at a family reunion, so he drove his wife and their camper to the event, stayed long enough to be polite, then headed back home.

Sauer’s vineyard gets its water from a well, and he isn’t concerned about going dry this year, despite the severe drought Washington state is facing. But some of his other crops, including Concord grapes, are tied to the Wapato Irrigation District, and that water source has been shuttered occasionally so far this year despite having senior water rights.

Sauer doesn’t water every day. Instead, he gives his vines a deep drink every few days.

“We seem to have managed pretty well,” he said. “We seem to be getting by OK. But if our pumps go down, there’s no margin for being down for a week.”

Mike Sauer is owner of Red Willow Vineyard in the western Yakima Valley. When temperatures rise, he stays close to his vineyard to protect his vines. (Photo by Andy Perdue/Great Northwest Wine)

During this key time of the season, vineyard crews have plenty to do to tend the vines. But because of the heat, they aren’t able to work as late into the day. Small’s vineyard manager arrives about 4 a.m. daily, and the crews show up to work soon after.

“They have the right to leave whenever they want, no questions asked,” he said. “That’s the way we work. Everybody has to be hydrated. We have a lot of second-generation people out there, and they’re important to us.”

Sauer said his crews start about 6 a.m. and work until noon when it’s this hot. If it’s a little cooler, as it was Monday after a thunderstorm, they’ll work a little longer.

And Sauer, who established Red Willow Vineyard more than 40 years ago, is right there alongside them.

“You don’t farm from a distance.”