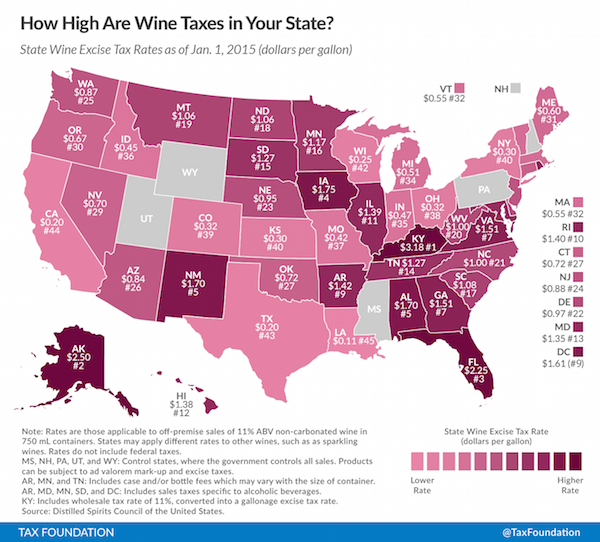 All United States wine consumers taste the bitterness of federal taxes when purchasing a bottle of wine, but those in Washington state sit about in the middle compared with others when it comes to shelling out for its state excise tax.

The Tax Foundation, which describes itself as a non-partisan research think tank, based in Washington, D.C., recently published its annual report indicating how much excise tax each state collects from wine sales as of Jan. 1.

All three Pacific Northwest states rank near the middle. Washington is at No. 25 with an excise tax per gallon of $0.87. Oregon sits 30th at $0.67, and Idaho is the least onerous by collecting just 45 cents, good for a ranking of No. 36. Neighboring Montana checked in at No. 19 with a tax rate of $1.06.

“States tax wine with a wide variety different taxes and rates, but the rates are usually higher than beer excise taxes because wine has a higher alcohol content,” Borean wrote.

Borean also noted the rankings do not include states that control all alcohol sales — Mississippi, New Hampshire, Pennsylvania, Utah and Wyoming. The Tax Foundation cited the Distilled Spirits Council of the United States as the source of the tax information.

Northwest states among 37 without increase since ’09

The Tax Foundation’s 2009 table indicates state Legislatures across the country largely have not raised the wine excise tax rate. This list of those which did includes 13 states and the District of Columbia.

According to the Tax Foundation, Washington has been flat so its ranking has improved since 2009, when its excise tax rate of 87 cents slotted it at No. 16 in the nation.

Rates apply to off-premise sales of non-carbonated wine in a 750-milliliter container with an alcohol by volume of at least 11 percent. And the Tax Foundation figures do not reflect  federal taxes.

The report developed by Tax Foundation staffers Samantha Jordan and Scott Drenkard pointed out that federal rates differ by type and alcohol content.

Wines up to 14 percent alcohol by volume (ABV) are taxed at $1.07 per gallon, while wines between 14 and 21 percent ABV get hit at the rate of $1.57 percent per gallon. It is rare to see fortified wines with a listed ABV above 21 percent because that they are subject to a tax rate of $3.15 per gallon.

Sparkling wine gets its own category in the federal code and is taxed at $3.40 per gallon — regardless of alcohol content.