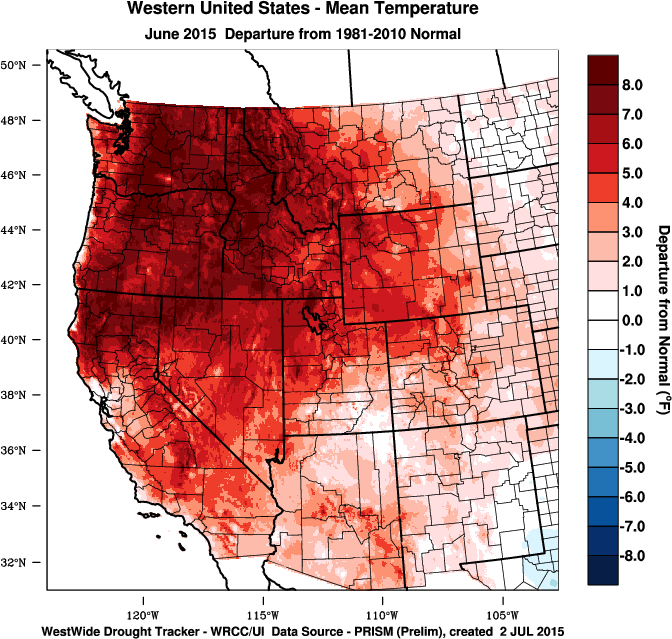 This chart of the West Coast of the United States reflects the June 2015 temperature departure from normal. (Image from the WestWide Drought Tracker, Western Region Climate Center and University of Idaho/courtesy of Greg Jones)

The dog days of summer arrived early in the Pacific Northwest, and Oregon research climatologist Greg Jones doesn’t expect the continued transition toward an El Niño phase to offer this corner of the United States much relief.

“Even with the onset of the El Niño, the U.S. Drought Monitor and others are still forecasting for the drought across the western U.S. to either persistent, intensify or develop from the current conditions seen in California, Oregon and Washington,” Jones wrote in his Fourth of July weekend report to the Pacific Northwest wine industry.

Jones, the Northwest wine industry’s world-renowned climate researcher, pointed out that while temperatures during May were close to normal, last month was historic.

“June brought record breaking heat to many locations and conditions do not appear to be letting up anytime soon,” he wrote. “Temperatures over the western U.S. were largely above normal, especially from Northern California, throughout Oregon, Washington, Idaho and into the Great Basin and northern Rockies.”

In fact, they ranged from 8-10 degrees Fahrenheit above normal in the Pacific Northwest, and the growing degree days charts from wine country weather stations he monitors reflect that. 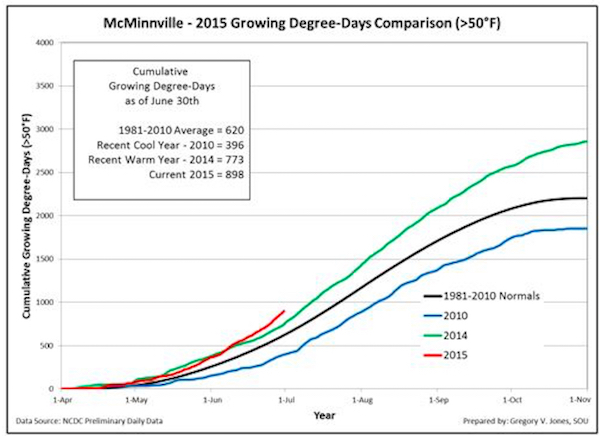 The Southern Oregon University professor’s Willamette Valley station in McMinnville recorded 898 GDD through June 30, which is well ahead of the 773 from last year’s historically hot vintage for Oregon Pinot Noir. And it’s in stark contrast to the 396 GDD from the cool 2010 vintage. 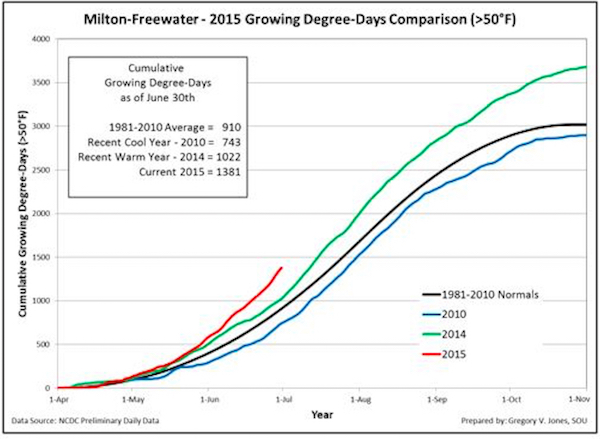 In the Columbia Valley, the Walla Walla Valley station in Milton-Freewater, Ore., stood at a stunning total of 1,381 GDD to start July 1, compared to last year’s warm year of 1,022. 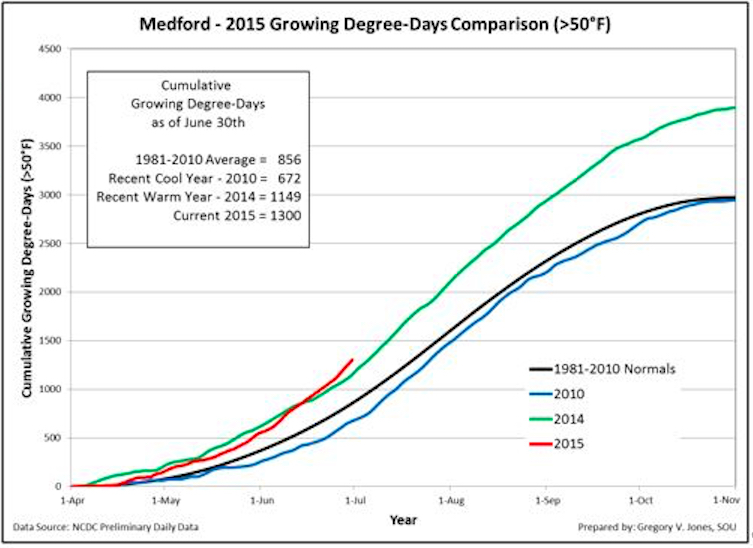 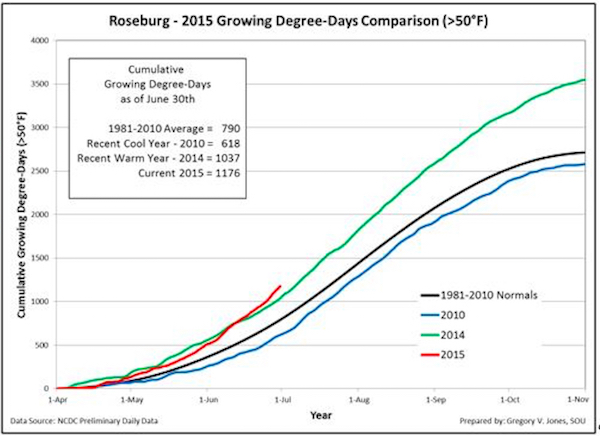 Jones’ station in the Umpqua Valley city of Roseburg checked in with 1,176 GDD through June 30. Last year, it measured 1,037 on its way to a season total that eclipsed 3,500 growing degree days.

“To date in 2015, growing degree-days are at or above normal in California and substantially higher than normal in Oregon and Washington with June accumulations putting degree-days 10-20% above the record numbers seen in 2014,” he wrote. “Reports from across the West highlight generally favorable growth conditions with little bloom disruption and a good fruit set in late May to early June in most regions and continue to point to early vine growth and fruit development (10 to 20 days early).” 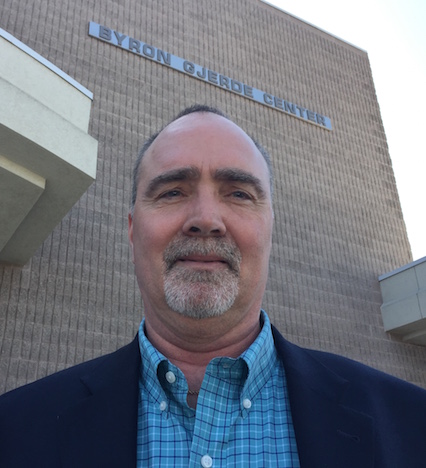 Greg Jones is a research climatologist at Southern Oregon University and a wine industry expert.(Photo by Eric Degerman/Great Northwest Wine)

Those figures charting growing degree days are misleading to a certain degree. One of the issues that grape growers must deal with this summer — in addition to widespread water shortages — is that research indicates vines shut down once temperatures hit about 95 degrees.

On Saturday, Washington’s Yakima Valley suffered through its ninth consecutive day of 100-degree temperatures, breaking the record of eight days in July 2013.

Another factor in the development of the grapes comes at night when cooler temperatures help maintain acidity. Typically, that’s a selling point for Pacific Northwest wines, but this season continues a rather disturbing trend for the region’s winemakers, however.

Jones, who is spearheading the 11th International Terroir Congress next summer at Linfield College, said the development of an El Niño and its effects are expected to inject moisture across the Southwest — and to the north of Oregon and Washington.

“Conditions in the tropical Pacific continue to show strengthening El Niño conditions (warm tropical waters westward off of South America),” he wrote. “Additional data from across the tropics points to a strong likelihood of the event strengthening into the fall and winter. There also continues to be some talk of this being a ‘strong’ event with widespread impacts globally.

“As mentioned last month, El Niño events tend to cause a large separation in the jet stream, with the sub-tropical jet ushering in large amounts of moisture in the Southwest and into Texas and the polar jet stream being pushed northward and into a ridging pattern.”

In the meantime, it already is affecting salmon runs and bird migrations because their food sources are changing. 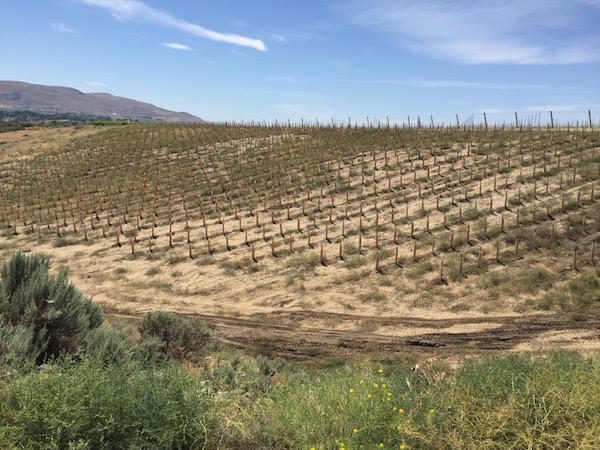 Plantings have continued on Washington’s Red Mountain despite the record-setting temperatures of June. (Photo by Eric Degerman/Great Northwest Wine)

Grape growers along the West Coast are predicting a harvest that will start earlier than usual. And the forecast is for conditions in the Pacific Northwest to be similar to 2005.

“Summer (June-Sept) – warmer from the North Coast of California into Oregon and Washington, cooler from the Bay Area south and into the southwest,” Jones wrote. “The cooler conditions south would be expected from increased cloud cover, precipitation, and higher humidity levels from southwest flow from the El Niño region. Thunderstorm activity during the summer from the central valley of California north into Oregon also increases during these conditions.

Time will tell whether or not 2015 will prove to be a historically warm vintage.