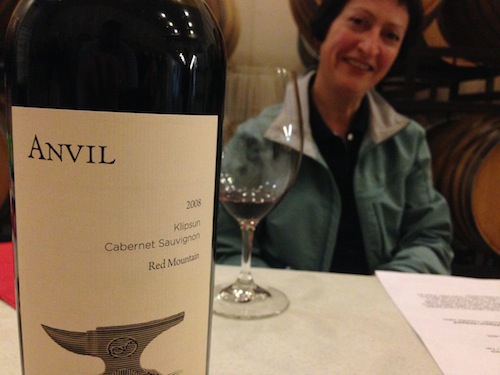 Marie-Eve Gilla, a longtime Walla Walla winemaker who grew up in France, produces Anvil only when a wine and vintage speak to her. (Photo by Andy Perdue/Great Northwest Wine)

Gilla, winemaker and partner at Forgeron Cellars, launched her top-tier label “Anvil” with the 2008 vintage when she simply could not bear to blend away a few barrels of Cabernet Sauvignon from acclaimed Klipsun Vineyards on Red Mountain.

“As a winemaker, you always want to do something a little more special,” she told Great Northwest Wine. 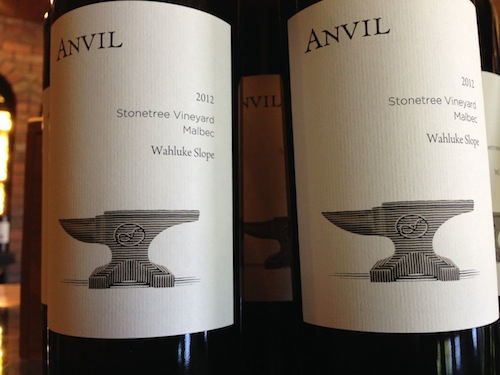 The Anvil 2012 StoneTree VIneyard Malbec was released in April. A small amount of this stunning red is available at Forgeron Cellars’ tasting rooms in Walla Walla and Woodinville, Wash. (Photo by Andy Perdue/Great Northwest Wine)

Gilla had been thinking about how to create a reserve tier for about three years before she pulled the trigger on the 2008. The name “Anvil” is a play on “forgeron,” the French word for “blacksmith.” Forgeron Cellars launched in 2001 in a former blacksmith shop just a couple of blocks south of Main Street in downtown Walla Walla.

Making a decision on whether a wine makes it into her Anvil program can occur anytime.

“We leave it wide open,” she said. “For example, with the Klipsun Cab, we didn’t know right away what we wanted to do.”

She ended up making the right call, as that wine earned 97 points from The Wine Advocate, the highest score ever for a Forgeron wine.

In 2009, Gilla was particularly impressed with the wine she made from Dionysus Vineyard north of Pasco, which is part of Sagemoor Vineyards. So she blended Cabernet Sauvignon and Petit Verdot from Dionysus with a bit of Merlot from Boushey Vineyard in Grandview.

These two vintages were followed by 2010 and 2011, which were unusually cool for Washington, and Gilla chose to not make the Anvil wines either year.

“Because they were cooler vintages, I did not want to take away from the Forgeron wines,” she said. “So every year is different.”

In 2012, the Malbec she received from StoneTree Vineyard on the Wahluke Slope was visually in bad shape because of some hail damage. But once it started fermenting, Gilla knew she had something special on her hands.

“I figured it out during fermentation,” she said. “Of all the wines we made in ’12, that Malbec was just so outstanding, so that’s why I decided to use it in the Anvil. It has so much volume and so much power behind it, it’s a different style of winemaking than Forgeron.”

In 2013, she put the spotlight on Chardonnay she received from French Creek, a vineyard on the north side of the Yakima River just east of Prosser. It’s run by Damon LaLonde, who also manages Scooteney Flats and Red Heaven vineyards on Red Mountain. The wine will be released in August.

Because 2014 was one of the warmest vintages on record, Gilla decided to not do an Anvil wine. 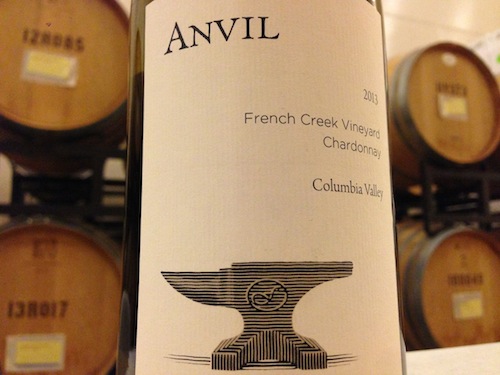 Most wineries that have reserve-level wines typically do the reserves every year. Sometimes, the decisions are made in the vineyard depending on a specific block of grapes, and sometimes they’re made in the cellar as the winemaker tastes through barrels and starts to see which are performing better.

Sometimes, however, a reserve program can box in a winemaker to either produce a wine in a lesser vintage (though not always) or try a little too hard on the reserve wines and smother them with oak, for example.

Gilla, who grew up in France, has no such intentions with Anvil. The wines that go into Anvil must speak to her in a way that proves they are special.

“It doesn’t have to be the same all the time,” she said. “It just has to be what we think is the best presentation in a given vintage.”

The Anvil wines typically are released in April during a special dinner at the winery. This year, that wine was the 2012 StoneTree Vineyard Malbec, and the quality of the wine had fans flocking to the tasting room afterward to buy it up.

The Anvil wines are sold only through Forgeron Cellars’ tasting rooms in Walla Walla and Woodinville, and they typically stick around for six months or so.

“The Malbec is about two-thirds gone (out of 121 cases produced),” she said. “We don’t try to push it out too much. We want it to trickle out. We try to hold it back for our customers.”

Anvil also serves as a showcase for Gilla’s considerable winemaking talents, and that often leads to new wine club memberships.

“I started making the Seven Hills Cabernet last year, and I think it has that potential to be really outstanding, and it would be a very good candidate for one of the upcoming Anvils,” she said. “I also started getting Chardonnay from Celilo last year. I love the potential of that cooler site. That would be one I would really like to use in the Anvil. 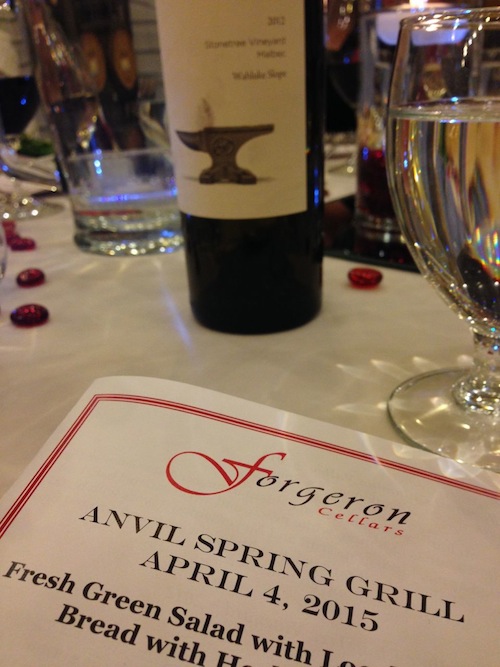 Gilla grew up near Paris, but her mother’s family was from Burgundy, so she spent a lot of time in both regions of France. Her time in Burgundy led her to study winemaking at the University of Dijon in Burgundy.

In 1991, she came to the United States to pursue winemaking as a career. Because of her focus on Pinot Noir and Chardonnay from her time in Burgundy, Gilla landed in Oregon. That first job was working for Argyle Winery in downtown Dundee, where she added to her knowledge under Rollin Soles, then head winemaker at Argyle.

But back then, the Oregon wine industry was small, and the economy wasn’t great, so she moved north of the Columbia River into the Yakima Valley. Her first job there was at Covey Run Winery near Zillah, where she spent four years. She then went to Hogue Cellars in Prosser for two years. At the time, Hogue was making wine for Jeff Gordon, owner of Gordon Estate north of Pasco along the Snake River. He decided he wanted his own winery and winemaker, so he hired Gilla for that job.

She stayed on until 2001, when she had the opportunity to move 50 miles east to the burgeoning wine region of Walla Walla to make the wines for Forgeron.

Ironically, her husband also is from France – and also is one of the region’s top winemakers. Gilles Nicault is the winemaker for Long Shadows Vintners. The two met in 1994 when Nicault was making wine for Staton Hills Winery (now Sagelands Vineyard) in the Yakima Valley town of Wapato.

The two didn’t know each other in France – he grew up in the Rhône Valley – but happened to meet in the Yakima Valley.

“At the time, there weren’t very many French people here, so that made it easier,” she said with a laugh.

Those who would like to be among the first to try the Anvil 2013 French Creek Vineyard Chardonnay will have the opportunity Aug. 22 at the Woodinville tasting room, which is near the Hollywood Schoolhouse. The farm-to-table dinner will serve as the wine’s release party. To sign up, call Forgeron Cellars at 509-522-9463.