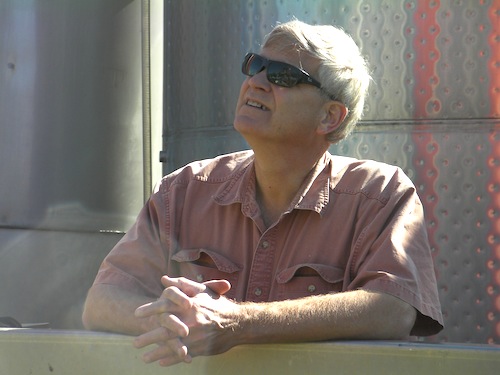 As Washington’s wine grapes ripen at an alarming rate, winemakers across the state are scrambling to install new equipment, bottle new wines or even get in one last vacation before the 60-day sprint through harvest takes place.

“It’s all a little scary,” said Rob Griffin, owner/winemaker of Barnard Griffin in Richland. “I’m trying to get new equipment installed and the last of my bottling done.”

As he spoke, Griffin was on his crush pad installing a new crusher/destemmer that will go into use rather soon. He said he either needed to spend a lot of money on repairs or a lot of money on new equipment. He chose the latter.

“It was time to get out of the ’70s with our technology,” he said with a chuckle.

In the Walla Walla Valley, L’Ecole No. 41 owner Marty Clubb is getting ready for what he thinks will be a fantastic harvest.

“We’re prepping the winery early this year,” he said. “We finished our last bottling about a week ago. We know it’s going to be early, so my guys are ready. We’re getting the harvest crews lined up and making sure the trucks are working.”

Charlie Hoppes, owner and winemaker for Fidelitas Wines, says he will pick a little Sauvignon Blanc from Red Mountain in August, but his red grapes should be able to wait until September. (Photo by Andy Perdue/Great Northwest Wine)

After two weeks of triple-digit temperatures in late June and early July, the last couple of weeks have brought more typical temperatures in the Columbia Valley, with highs in the high 80s and lows dropping below 60 degrees for the first time in a couple of months.

Charlie Hoppes, owner/winemaker at Fidelitas Wines on Red Mountain, thinks this has slowed ripening just enough to hold off a ridiculously early start to harvest.

“I don’t think it’s going to be as early as everyone thinks,” he told Great Northwest Wine. “I’m not seeing 100 percent veraison (the French term for when wine grapes turn color). We’ll be early, but we won’t be picking reds on Aug. 20 or some crazy thing like that.”

The majority of Hoppes’ wines are red. He said he will undoubtedly pick a little Sauvignon Blanc in August, but he doubts any reds will arrive at his Richland winemaking facility before the calendar flips over to September.

“It felt nice and cool sitting outside (Monday) night,” Hoppes said. “It hasn’t felt like that since May. With the extended heat early, I think the vine is going to react a little differently. A little downturn in the weather has been good for everybody. It’s been nice to have a little break in the weather.”

Meanwhile, Hoppes’ crew is cleaning tanks and getting ready to bottle about 5,000 cases of Fidelitas wines before harvest gears up. He’s also keeping an eye on his new estate vineyard, which was planted in May by Yakima Valley grape grower Dick Boushey.

“The new vines got through the heat just fine,” he said. “We’ve been able to leave the water on to get them up and established. By September, we can probably shut the water off and be done for the year. I’m happy with that.”

“My sense is that the Walla Walla Valley is a bit ahead of last year – but not much,” he said. “The Yakima Valley seems to be quite a bit ahead. At this point, I’m praying for the cool to kick in by mid-August to slow us down.” 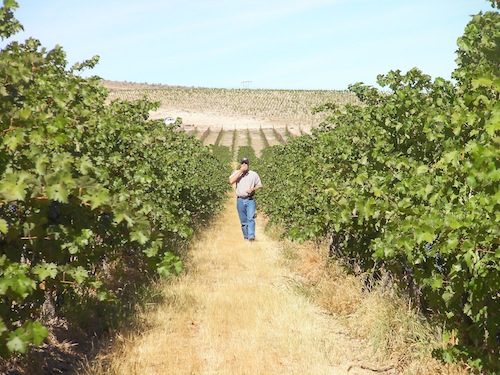 Bob Bertheau, head winemaker at Chateau Ste. Michelle in Woodinville, oversees production in Washington’s largest winery. He plans to bring in his first grapes as early as Aug. 12.

The over/under is the 12th to the 14th,” Bertheau said. “The yeast is ordered, so bring it on. I have a lot of tons to bring in, so things are lining up nicely.”

Bertheau spoke as he hiked along the Deschutes River near Bend, Ore.

“One last respite before harvest,” he said.

Bertheau said that of what he’s seen so far in the vineyards, the crop is fairly average in size.

Clubb said he picked Sauvignon Blanc from Klipsun Vineyards on Red Mountain last year on Aug. 27. He expects to bring in those same grapes around Aug. 21.

“It’s three to four weeks out, depending on the weather,” he said.

Griffin brought in Sauvignon Blanc from Sagemoor Vineyards on Aug. 22 last year. He expects it to be come in a couple of days earlier this year, which would be the earliest he’s ever picked since arriving in Washington in 1977.

“Everybody will be working before Labor Day this year,” Griffin said. “We’re making sure all systems are go.”