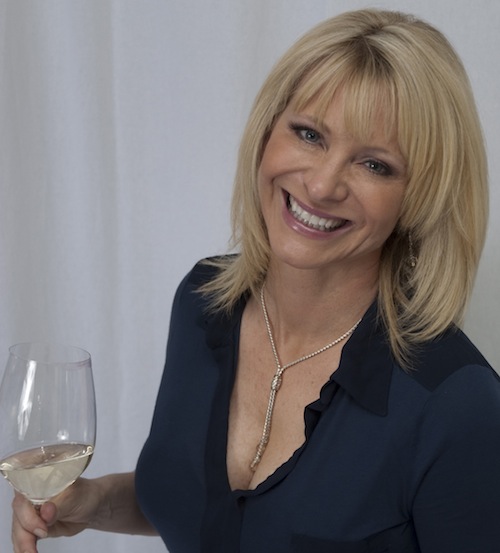 SAN FRANCISCO – One of America’s most prolific, visible and social wine experts started life in a humble Midwest household that was devoid of wine until a forward-thinking physician entered the picture.

We recently caught up with Leslie Sbrocco, award-winning wine writer, author, TV personality and speaker while she was judging at the annual San Francisco International Wine Competition at the Hotel Nikko near Union Square. She has developed a national following, thanks to hard work and lots of studying.

“I just love to drink!” she told Great Northwest Wine.

Here’s our interview with Leslie Sbrocco:

Sbrocco grew up in Chicago, and there wasn’t a lot of wine around her household until her father, an airline pilot, had a heart attack.

“He had a revolutionary doctor at that time, who said, ‘I’d like you to drink red wine every day,’ ” she said. “So my father took that seriously and did. As a kid, I got to taste bits of wine. I remember seeing a Sterling Vineyard bottle of Cabernet Sauvignon in the wine rack. I did get to taste and get a good introduction to wine and travel growing up.”

After graduating from high school, Sbrocco went to Boston University, then Washington University in St. Louis. She moved to San Francisco with the intent of going to law school and becoming an attorney.

Some friends of hers who were in law school dissuaded her from that direction. She decided to come up with a new direction for her life.

“I’d been involved in a lot of writing and communications and theater, and I started doing some commercial work and producing,” she said. “Because I was living in San Francisco, I just sort of fell into wine.”

Learning about wine then was not as simple as it is today. There were fewer wine appreciation classes or training courses.

“It wasn’t like you could just walk out the door and take a WSET course like you can now,” she said. “It’s a lot of self-training, a lot of travel, a lot of meeting winemakers and walking vineyards and taking courses at U.C.-Davis. It was pure passion that I followed my heart and my palate.”

In 1998, Sbrocco co-founded WineToday.com, one of the early successful wine websites. She operated it for The New York Times for three years, until the first Internet bubble burst.

In 2003, she published her first book, a bestseller called Wine For Women that won the Georges Duboeuf Wine Book of the Year Award.

“I really had no intention of focusing on women,” she said. “But it just sort of evolved that way. I was doing quite a bit of education. I just noticed that women asked me different questions than men. I didn’t recommend different wines for men or women. I just took more of a lifestyle approach.”

Sbrocco was one of the first to take a women-focused approach to wine.

“I don’t believe that women drink differently than men. It was just the approach to what’s in the bottle, and it resonated and it created a lot of buzz for me, and I was able to really create the next set of things that I did.”

And she’s working on the 10th season of “Check Please!” a show on a Bay Area PBS station that has earned Sbrocco three Emmy Awards and a James Beard Award.

“I’m very proud of the show,” she said. “It’s about three regular people who apply to be on the show.”

Together, they go to restaurants around the Bay Area, and the three guests get to critique the experiences.

“We drink and relax,” she said. “It’s three friends sitting around the table talking about restaurants and food.”

The concept started a dozen years ago in Sbrocco’s hometown of Chicago, and now it has expanded to the Pacific Northwest, South Florida and elsewhere across the country.

Through the years, she’s also worked with Oprah Winfrey, writing for O Magazine and touring with Winfrey and her chef.

These days, she writes for NBC.com and regularly appears on the Today Show with Kathie Lee Gifford and Hoda Kotb.

“To talk about wine on morning television in the U.S. is something that hasn’t happened before,” she said. “That’s why I love Kathie Lee and Hoda because they’ve said it’s OK for us to show wine at 10 o’clock. I get to do very educational, fun, fast-paced, informative segments. And you reach 6 million people at a time.”

Since early in her career as a wine professional, Sbrocco has admired Washington wine.

“What I love about Washington state is, of course, the climate,” she said. “I’m a big Riesling fan, so of course with Ste. Michelle being the world’s No. 1 Riesling producer, you get a lot of beautiful Riesling of of Washington state. And I’ve always been a fan and a follower.”

“To me, a signature Washington wine is about that snap of acidity, that structure, that elegance, that age-worthiness that you don’t often get in some big, bold California wines – and I can say that because I live in California,” she said. “I’m a huge fan of Washington red blends, and I just think there’s such a thumbprint and a signature that screams, ‘I’m from Washington!’ It’s a beautiful thing.”

Through the years, Sbrocco has visited Washington many times, including speaking at Taste Washington. She also gets to taste Washington wines at the myriad wine competitions she participates in.

“It’s a great way to keep your palate in shape, to follow trends, to see what’s new, what’s out there,” she said of wine competitions. “And because everything is done blind, it really does put everything into perspective for you.”

“I’ve had a chance to do quite a lot of competitions, and I do love doing them.”

Sbrocco, who lives in Sonoma County, is active on social media. In fact, one might think the various platforms are made especially for her.

“It’s a nice way to get feedback,” she said. “If you tweet me and tag me, I will respond to you faster than email.”

Sbrocco is the first to admit that the career she has carved out for herself is nothing short of magical. She’s heading to Spain soon, and she plans to spend harvest this fall in Champagne and Portugal.