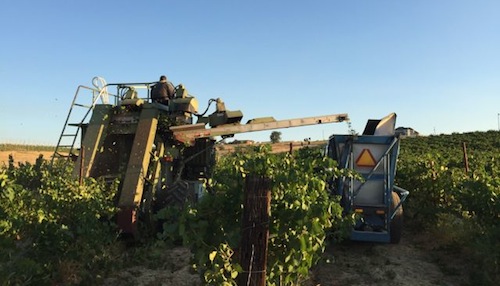 Workers harvest about 18 tons of Chardonnay grapes in Washington’s Rattlesnake Hills. This is believed to be the earliest harvest in the history of the Washington wine industry. (Photo by Andy Perdue/Great Northwest Wine)

The grapes were harvested at Hilltop, a 31-year-old 5-acre vineyard near the Yakima Valley community of Buena that is managed by Patrick Rawn of Two Mountain Winery in Zillah. He leases the vines and sells the fruit to Treveri Cellars in nearby Wapato.

By all accounts, this is the earliest harvest ever in the history of the Washington wine industry. Last year, harvest began Aug. 18 when Paul Champoux in the Horse Heaven Hills brought in 1.6 tons of Marquette, an unusual red variety that was bred to ripen in the upper Midwest. Champoux told Great Northwest Wine that he plans to harvest this year’s Marquette on Monday.

“That’s the earliest in my career,” he said. “We’re usually around Labor Day. That’s the rule of thumb.”

Corliss said it’s unlikely that wine grapes were ever picked earlier than that prior to 1987 because viticultural practices were such that grapes ripened more slowly – primarily because much more water was used to irrigate the vines. 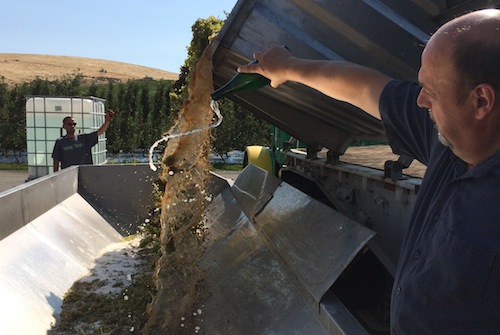 Juergen Grieb, owner and head winemaker for Treveri Cellars in Wapato, Wash., pours a bottle of sparkling wine into Chardonnay grapes to christen the beginning of the 2015 Washington wine grape harvest. (Photo courtesy of Treveri Cellars)

These particular grapes were harvested early because they will be turned into sparkling wine at Treveri, which specializes in bubbles.

Christian Grieb, who makes wine alongside his father, Juergen, and also is vice president of sales for Treveri, said the grapes that were picked starting about 4:30 a.m. were at 18.6 Brix, a measurement of sugar content in the fruit. Most white wine grapes are picked at closer to 23 Brix, and red wine grapes often are picked at 24 Brix or higher.

This is because sparkling winemakers want bright acidity and lower alcohol, as the wine goes through a second fermentation to produce the trademark bubbles.

“We usually pick around 18 Brix to prevent the alcohol from getting too high,” he said.

When the grapes arrived, the Griebs sabered a bottle of Treveri sparkling wine – cutting the top off with a saber – to christen the start of the 2015 vintage.

“We like to saber a bottle of sparkling as a toast to the new fruit,” Grieb said. “We like to douse the fruit with a little bit of bubbly. Last year, it was Pinot Noir. This year, it’s Chardonnay. It’s a way for the old and new vintages to mesh. It’s a fun little tradition we have.”

Last year, Hilltop Vineyard was picked on Aug. 25, so this year’s harvest – 18 days earlier – caught many off-guard, including Jack Maljaars, owner of Vine Tech Equipment in Prosser, whose crew began harvesting the grapes before dawn.

Maljaars and his crew were wearing coats as they picked the grapes, thanks to temperatures in the low 50s – nearly 40 degrees cooler than they were just 12 hours prior.

“It feels like the middle of September out here,” he said.

More grapes coming in next week 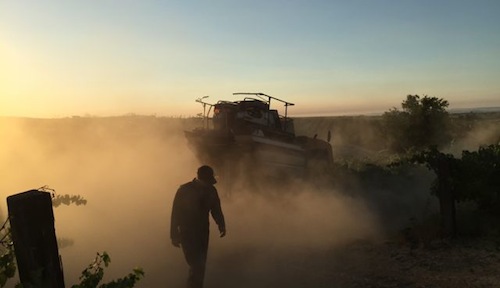 A member of the harvest crew walks through a cloud of dust kicked up by a wine grape harvest at Hilltop Vineyard near Zillah, Wash. (Photo by Andy Perdue/Great Northwest Wine)

Treveri is planning to bring in a bit of Yakima Valley Pinot Noir in about a week – fruit that also will be turned into sparkling wine.

“We’re slowly easing into it,” Grieb said. “We’ll be full-on into harvest by the end of August.”

Ste. Michelle Wine Estates – which uses two out of every three grapes grown in Washington – has its first scheduled pick Tuesday, when it plans to bring in Sauvignon Blanc from Upland Vineyard on Snipes Mountain in the Yakima Valley, followed by Chardonnay from its estate Cold Creek Vineyard north of the Yakima Valley town of Sunnyside.

“It’s a unique year,” Corliss said. “I would much rather have a problem with grapes being ripe than the other way around.”

In 2010 and 2011 – cool vintages in Washington – Ste. Michelle picked no grapes until September. In 2010, it harvested almost no red grapes until October. That won’t be the case this year.

Victor Palencia, director of winemaking for J&S Crushing in Mattawa, originally believed he might pick Pinot Gris this week or next but told Great Northwest Wine that he’ll now probably wait another 10 days or so before harvest gets into full swing. During the next 90 days, Palencia and his crew will crush enough grapes to make more than 1 million cases of wine.

“Here we go!” he said excitedly. “It’s going to be early this season. That will give us flexibility with reds so we can let them hang.”

Rob Griffin, owner/winemaker at Barnard Griffin in Richland, is scheduled to bring in Pinot Gris on Aug. 17 – which is the earliest since arriving in Washington in 1977. That year, he remembers not beginning harvest until after Oct. 1.

Hilltop Vineyard is tucked away in the western Yakima Valley, not far from Interstate 82, though well off the beaten path.

“It’s hidden up in the back of the valley,” Rawn said.

It was planted by the Morrison family and, as far as Rawn has been able to ascertain, dates back to 1984. Walter Clore, considered “the father of Washington wine,” was a consultant on the planting, helping to decide that Chardonnay was the best variety to grow there.

The vineyard is surrounded by other crops, including pears, peaches and hops. Rawn and his brother began leasing it a decade ago, but they gave up the lease for a couple of years while they were getting Two Mountain Winery up and running. When the vineyard became available again two years ago, they decided to farm it even though they didn’t need any additional Chardonnay.

Fortunately, Treveri was interested in buying the grapes, so Rawn took on the vineyard again.

“There are not a lot of vineyards with that kind of age on it,” Rawn said.