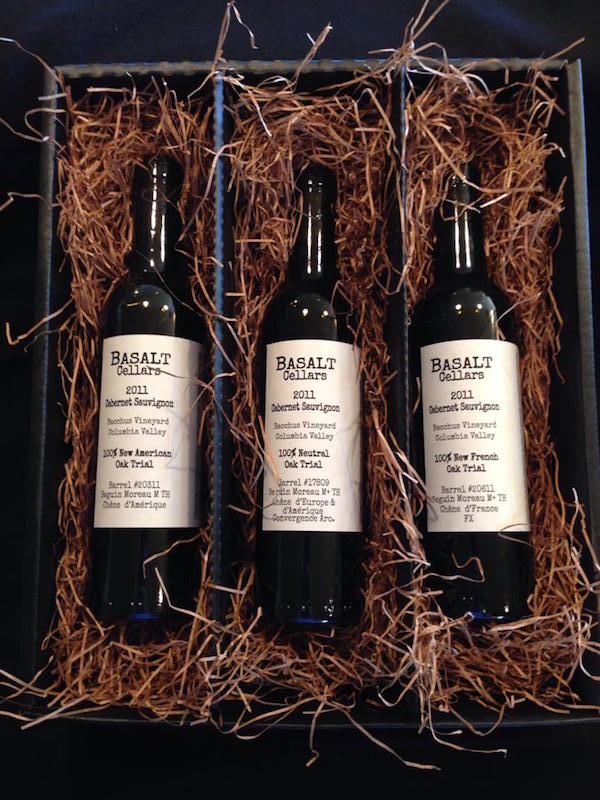 CLARKSTON, Wash. — Washington winemaker Rick Wasem educates Basalt Cellars customers on the science behind colloids, tartaric acid and toast levels, and recently he’s achieved success with an oak experiment featuring some of the oldest Cabernet Sauvignon vines in the state.

“I’m a pharmacist, so I have that inquisitive, scientific aptitude,” Wasem said. “I like to do trials and comparisons.”

It’s also a study in education for consumers and marketplace research for Wasem. Essentially, the project for the Clarkston vintner has entered in its fifth year, and it continues to evolve as the Basalt Cellars 2011 Bacchus Vineyard Cabernet Sauvignon Oak Trial Trio. 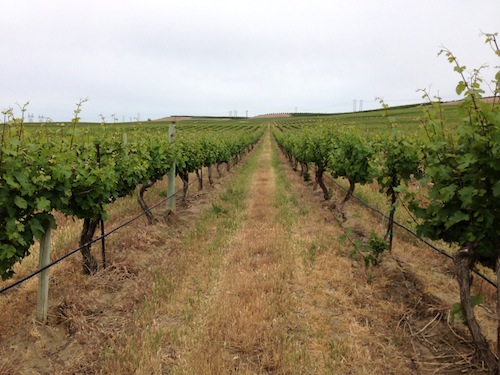 Bacchus Vineyard ranks among the state’s most venerable sites, first planted in 1972 at the suggestion of Washington State University researcher Walter Clore as part of the Sagemoor Vineyards project. Wasem took the cool-vintage fruit and applied identical winemaking methods to each of the three lots. The only difference, he said, were the barrels.

“I used the same yeast and tried to do everything the same for each barrel,” Wasem said. “We do a lot of barrel tastings for small groups and do a bit of oak education as part of the process. Some people think they like the French oak better, then they start tasting and like the American hybrid better. I’m surprised at the number of differing opinions.”

Adam Schulz, Seguin Moreau’s sales territory manager for the Pacific Northwest, sells to more than 300 customers in Washington, Oregon, Idaho and British Columbia. The commercial offering by Basalt Cellars is something one might expect to experience in California’s tony Napa Valley, not a historic mill town along the Washington-Idaho border.

“I’ve heard of one winery in Napa — Del Dotto — that offers something similar where customers have the opportunity to taste from different barrels and levels of toast,” Schulz said.

Basalt Cellars began with plantings in 1996 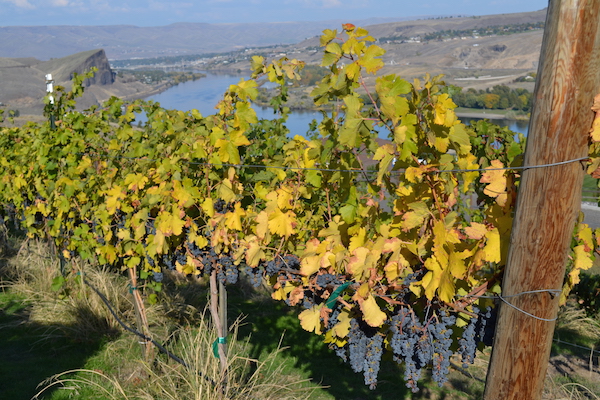 Rick Wasem planted his vineyard in 1996 at an elevation of 1,100 feet. It ranks among the easternmost plantings in Washington state. (Photo courtesy of Basalt Cellars)

Wasem, who began in 1996 to establish his own small vineyard in the proposed Lewis-Clark Valley AVA, operates two business in the historic river town of Clarkston. There’s the winery, which he launched in 2004 with co-owner/co-winemaker Lynn DeVleming, but his family name is more closely tied to Wasem’s — the corner drug store founded by his parents.

It offers a step back in time because the store at the intersection of Sixth and Oak includes a range of departments as well as a coffee shop proud of its fresh-baked pies and caramel corn. The combination can prove too tempting, especially for those with an empty stomach.

The interest in various levels of toast for these tasty oak-trial Cabs from Bacchus Vineyard has inspired Wasem to venture into new experiments for customers from his 2,000-case annual production.

“Originally, it was just a one-time trial, but there are a lot of people who find it interesting,” Wasem said. “I’m looking at doing different toast levels and maybe a trio of three vineyards of Syrah, since Syrah shows terroir so well in Washington. These are fun and educational.” 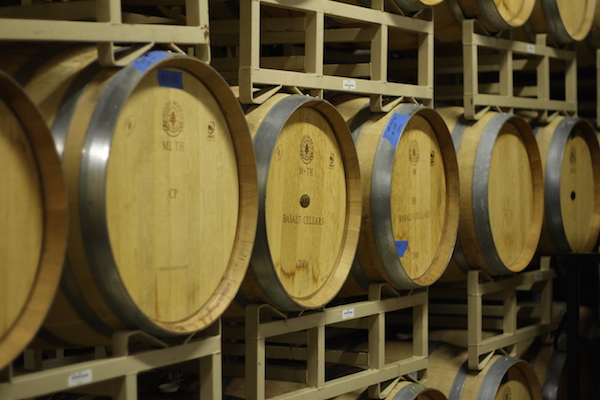 He chose to offer most of the Oak Trial Trio in 375-milliliter bottles, and sales associates Holly Bonnalie and Leisha Evangelho nearly have sold through with the 550 three-bottle gift boxes ($55), Wasem said.

The winemaking style for Basalt Cellars reds is unfined and unfiltered, so customers are told expect to find a bit of settlement in the glass — and why. The small formats accelerate the aging process, but Basalt Cellars also set aside a small number of standard-sized bottles as a trio for $99.

“I could see probably doing something like this every other year,” Wasem said. “We typically don’t release big reds until after 18 months in barrel and six to 12 months in bottle.”

One experiment that holds particular interest for Wasem is his 2014 lot of Bacchus Vineyard Cab that’s resting in his new Micro Vinificator. The Seguin Moreau product allows wine to ferment in an oak barrel that the winemaker rotates on a stand.

Its design is intended to offer more gentle winemaking, in part because stainless-steel vanes work to wet the cap with reduced impact on the berries. The rotating fermenter also advances the development of wine, allowing a winemaker to release it to the market more quickly if they choose, Schulz said.

“It makes the wine so silky and rich that it’s already an elegant wine,” Wasem said of Cabernet Sauvignon he crushed less than a year ago. “There are only a few that have been sold in the Northwest. They are kind of expensive.”

“I really do like French oak,” Wasem said. “If I had to choose one, that would be my choice, but we blend and use different oak and different barrels. If I were to create a wine that’s about 50 percent new French, 25 percent new American and 25 percent neutral, that would probably be my favorite.” 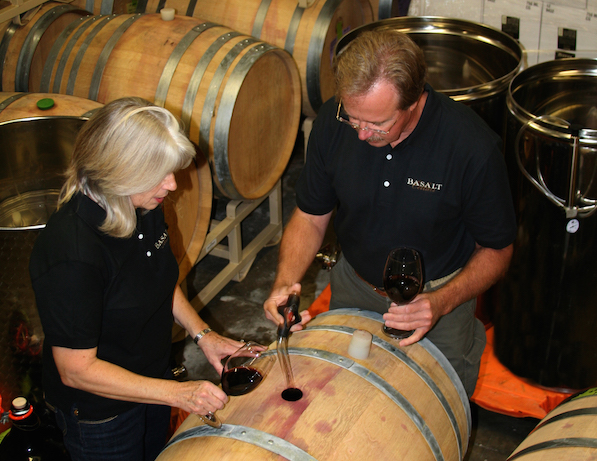 Great Northwest Wine’s tasting panel recently evaluated and rated the Basalt Cellars oak trial series under single-blind conditions, side-by-side within a flight of other Cabernet Sauvignon from the Pacific Northwest. The wines were sampled in the following order, and panelists were not informed of the trial wines until after the flight.

The use of 100% neutral oak offers aromas of blackberry, black currant, ripe blueberry and elderberry, backed by a hint of menthol and dusty — rather than toasty — oak. Inside, there’s a smooth entry of dark blue fruit with black olive, chocolaty tannins and a blueberry finish. In hindsight, it was interesting that one panelist made an observation of the alcohol poking out from the background, but “smooth” and “balanced” were common comments. (pH 3.88, TA 5.9 grams per liter)

Barrel notes of roasted coffee, toast and vanilla extract lead the aromas, which also offers up hints of chocolate-covered blueberry, blackberry and pencil shavings. The flavors again feature smooth blueberry and elderberry along with cordial cherry and dusty tannins as vanilla bourbon and chocolate linger in the finish.