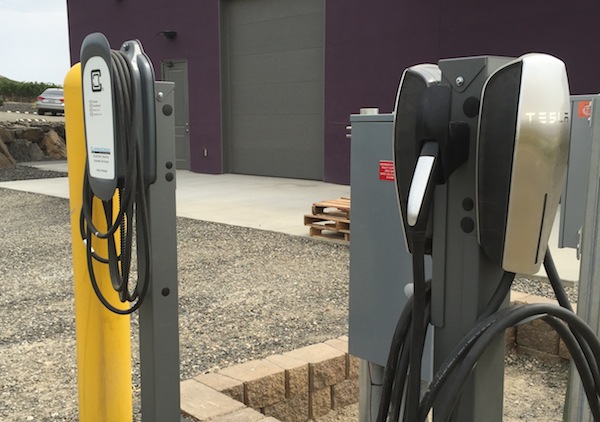 A Red Mountain winery already known for being among the greenest in Washington is now teaming up with Tesla Motors.

Hamilton Cellars and Tesla have installed a Tesla High Power Wall Connector at the winery on Sunset Road. It provides enough power to add 58 miles of range per hour to a Tesla Model S.

Tesla has been installing charging stations at hotels, wineries and restaurants around the world. The Tesla Model S has a range of 265 miles per charge.

Hamilton Cellars planted 9 acres of red Bordeaux varieties and built its solar-powered winery last year on Washington’s Red Mountain. It now has 121 panels providing power to its tasting room and onsite winemaking facility. It is one of the few “net-zero” wineries in the world.

“Hamilton Cellars is constantly finding new ways to heighten our guests’ experience,” said Russ Hamilton, who owns the winery with his wife, Stacie. “By combining leading-edge technology and the forward thinking of Tesla with our commitment to provide outstanding service and offerings, we now have the ability to offer guests a seamless and convenient experience during their visit.” 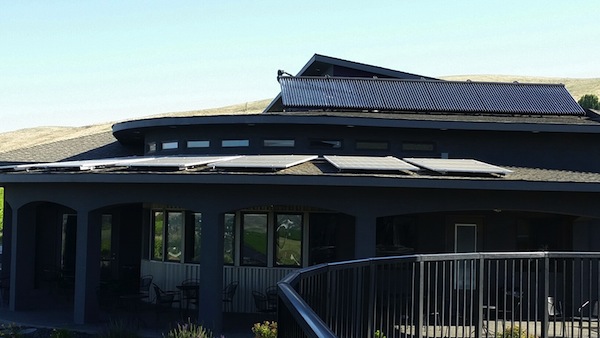 Hamilton Cellars on Washington’s Red Mountain has installed 121 solar panels and is one of the few wineries in the world to reach net-zero status. (Photo courtesy of Hamilton Cellars)

That Hamilton Cellars is offering green options to its visitor should be of little surprise. Russ Hamilton spent several years working for one of the world’s top solar panel manufacturers.

“Russ worked in China and Korea for five years as an executive in the solar industry and was really interested in having solar power at our facility,” Stacie Hamilton told Great Northwest Wine. “So when we built it, we put 121 solar panels on the building.”

Even with a 24-horsepower pump for irrigating the vineyard, the winery is able to supply its own electricity via the solar panels.

“We try to be as green as possible here,” she said. “We want to be off the grid as much as possible. Washington state has some great incentives for people who have solar power. It makes sense for us to do it. The payback is less than five years. We plan to be here a very long time, and that means we’ll have a lot of free energy generated over our lifetimes.”

At this time, the Tesla chargers are hooked into the transformer that feeds into the Hamiltons’ home, which is next to the winery. Thus, for the time being, they use traditional electricity. The Hamiltons said they are considering adding solar panels to their home to boost their own electrical output. 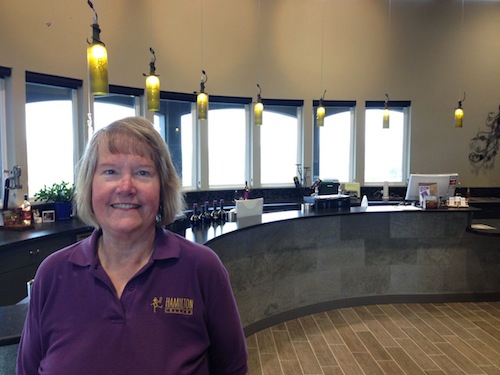 Hamilton Cellars is one of the few wineries in the Pacific Northwest that focuses almost exclusively on Malbec. The wines, made by Charlie Hoppes of nearby Fidelitas Wines, are gaining a reputation for crafting among the best Malbecs in Washington.

The Hamiltons came up with the idea of launching a Malbec-based winery about a decade ago. Their original idea was to build a wine village in nearby West Richland. When that plan fell through, they ultimately ended up with a wine tasting room in Richland, about 10 minutes east of Red Mountain.

They then spent six years trying to find property on Red Mountain – a difficult task because Red Mountain land has become increasingly valuable and scarce. After approaching the owner of 10 acres of orchard near Fidelitas about seven times, they decided to give it one more try before giving up their Red Mountain dreams. Fortunately, the landowner decided to sell.

The Hamiltons hired renowned grape grower Dick Boushey to plant their vineyard to Cabernet Sauvignon, Merlot, Cabernet Franc, Petit Verdot and Malbec. They will get a few tons of fruit during this year’s harvest and expect a full crop in 2016. They should ultimately have enough fruit to produce 2,200 cases of estate wines.

With the addition of the car-charging station, the Hamiltons are more likely to draw visitors who drive Teslas. Their winery will soon be included on an interactive map on the car manufacturer’s website, and Tesla owners will be able to find it through each car’s on-board GPS system and touch screen system.