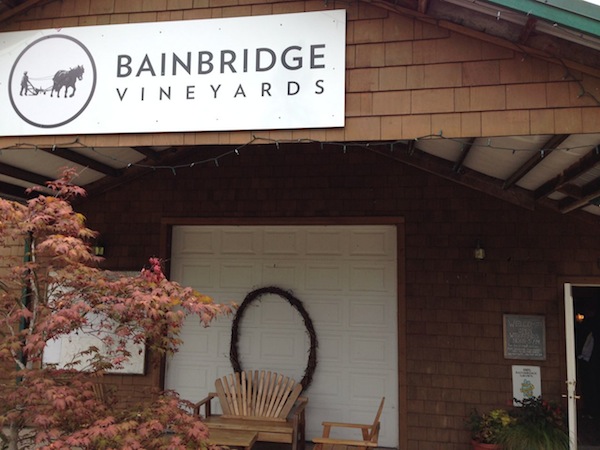 Bainbridge Vineyards is a small winery just a short ferry ride from downtown Seattle. The winery uses only grapes grown on the island. (Photo by Andy Perdue/Great Northwest Wine)

BAINBRIDGE ISLAND, Wash. – Nearly 40 years ago, Gerard and Jo Ann Bentryn arrived here with a dream: to grow grapes and make wine in a region many thought was too cool, too wet, too difficult.

Today, they are retired, but that dream and winery – now called Bainbridge Vineyards – has been taken up by a new generation of believers.

The Bentryns came to Bainbridge Island to plant vineyards in 1977, when the Washington wine industry was barely more than a dozen wineries. In 1995, the Puget Sound American Viticultural Area was approved, thanks to the tireless leadership of the Bentryns.

In 2009, the Bentryns mostly retired. Health problems arose, the economy collapsed, and the struggle became too great. Their son had no interest in taking on the family business. Then longtime employee Betsey Wittick stepped up. She knew the farm and its legacy deserved to be preserved and, perhaps, could use a reboot at the same time.

We traveled across the Puget Sound from Seattle to sit down with Wittick and talk about her journey here – and where it might lead. 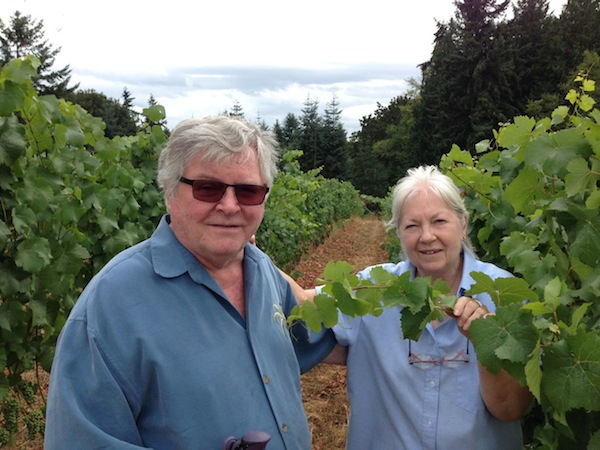 Gerard and Jo Ann Bentryn started Bainbridge Island Vineyards & Winery in 1977 and were instrumental in the approval of the Puget Sound AVA 20 years ago. (Photo by Andy Perdue/Great Northwest Wine)

Wine grapes have been grown in the Puget Sound region since before statehood, going back to at least 1872. But little was happening when the Bentryns began planting grapes in 1977.

“In Washington, people think of wine country as Eastern Washington because the majority of the grapes are definitely grown over there,” Wittick told Great Northwest Wine. “But Gerard and Jo Ann were pioneers in grape growing in the Puget Sound region.”

While Gerard was in the military, the two spent time in Europe and became entranced with the cool-climate regions of Germany, Alsace and France’s Loire Valley.

“So they specifically came here to grow grapes in Western Washington because of the similarity of the climate here,” she said. “They were looking for a place they could grow lower-alcohol wines that had a lot of delicate fragrances and flavors.”

They planted Pinot Noir, as well as lesser-known varieties such as Madeleine Angevine, Müller-Thurgau and Siegerrebe. In fact, they likely were the first to plant the German Siegerrebe in North America.

Their winery and tasting room were within walking distance of the ferry dock in Winslow (in 1991, Winslow and the rest of the island incorporated as the city of Bainbridge Island), and they made delicious dry and off-dry wines from the grapes they grew and island-grown fruit such as strawberries and raspberries. One of their customers’ favorites was an off-dry blend called Ferryboat White.

Through the years, the Bentryns were staunch advocates of locally grown grapes. While other Puget Sound wineries supplemented their local vineyards with grapes purchased from the Yakima Valley and elsewhere in arid Eastern Washington, the Bentryns stood resolute in their belief of Puget Sound viticulture.

Today, fewer than 100 acres of wine grapes are grown in the Puget Sound AVA, barely a statistic amid the more than 50,000 acres statewide. But no fewer than 20 varieties are grown at more than a dozen vineyards in such places as Whidbey Island, the Nooksack Valley, the Skagit Valley, Maury Island, Vashon Island, San Juan Island, Lopez Island and the aptly named Mason County town of Grapeview.

When the federal government approved the Puget Sound AVA in 1995, it was just Washington’s fourth (after the Yakima Valley, Walla Walla Valley and Columbia Valley) – six years before Red Mountain gained such status.

“It was pretty exciting for us because it gave recognition to the Puget Sound area,” Wittick said. “It helped to give a shot in the arm to those of us growing grapes in Western Washington. It was a really big deal.” 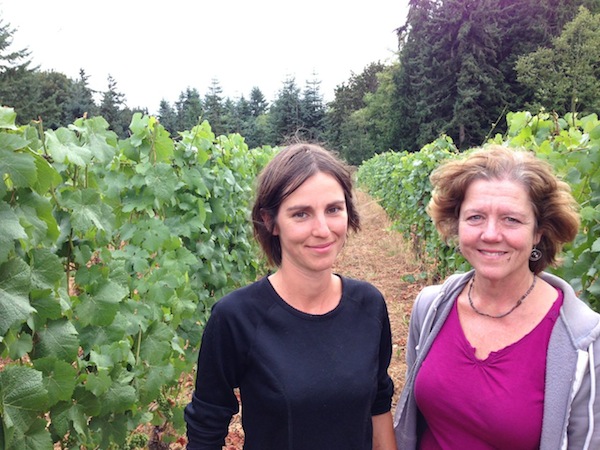 Bainbridge Vineyards is now an employee-owned winery and farm. Robin Bodony, left, and Betsey Wittick are two of the owners. (Photo by Andy Perdue/Great Northwest Wine)

When the Bentryns could no longer carry on because of time, energy and health – three things that were in short supply – it seemed as though the longtime winery would whither away, becoming little more than an anachronism in the history of Washington wine.

But up stepped Wittick, someone who had traveled across the country to discover a love for the soils of Bainbridge Island. Wittick grew up in Newark, N.J., but after she earned a master’s degree in horticulture at Cornell University, Wittick biked across the country and fell in love with the Puget Sound.

She was working in the nursery industry when she met the Bentryns and decided to help them prune grapes during the winter of 1988. Instead of joining the Peace Corps, she moved to Bainbridge.

Wittick quickly became the de facto vineyard manager, helping to plant most of the vineyards since then. Around 1992, she joined Gerard in the cellar, handling the dirty work of winemaking: cleaning tanks, dragging hoses and working in the lab – “wearing your rubber boots pretty much all the time.”

When the Bentryns decided to retire, Wittick worried that her entire life might be caving in. By this time, the Bainbridge Island Vineyards & Winery had moved from near the ferry dock to about four miles away on Day Road.

“I was an employee for more than 26 years, and I also lived on the farm where our vineyards are and the winery is,” she said. “So the thought of all that going away and getting bulldozed and ripped out was really hard for me to take because I helped plant a lot of them.”

She quickly sized up her options. The most viable was to create a new business with a different structure. Employees became owners, and local fans became investors. The winery reopened in December 2013, rebranded as Bainbridge Vineyards, complete with a new logo.

The paperwork, sale and transfer of the winery was a nightmare, especially for someone who prefers to keep her hands in the soil.

“It definitely took a lot of paperwork – way more than I was prepared to do,” she said. “When I think back on it, I don’t know if I could go through it again. I’m glad I’m on the other side of it now.”

So now she can focus on the farming. It’s an idyllic life. She is one of the few grape growers in the state who can smell the salt air while amid her vines. If she so chooses, she can catch a ferry and be in the Pike Place Market or at a Mariners game in less than an hour.

Not that she has much time for that.

“It sounds ideal,” she said. “I do work seven days a week, often 14-hour days, so there’s not a lot of time for a vacation.”

“I love the opportunity to be outside.”

The Bentryns still live on the farm, just steps away from the winery building. They’re there for moral and technical support as needed. They still love strolling through the farm, lovingly checking the vines they’ve nurtured for years. Time and perhaps no longer having the pressure of running a small business have mellowed them, though they still feistily promote the idea of everything local.

Last year, Bainbridge Vineyards became a certified organic farm, and it includes other crops, including raspberries, pumpkins, potatoes, garlic, lettuce and other vegetables.

She and her team craft about 2,000 cases of delicious, fresh, local wines. While a small amount is sold through other retails, the majority of Bainbridge Vineyards wines goes directly to consumers through the tasting room (open noon to 5 p.m. weekends) and at farmers markets.

Wittick encourages wine fans to pack a picnic, hop on the Bainbridge ferry and enjoy a leisurely time tasting wine and strolling through this little slice of paradise.