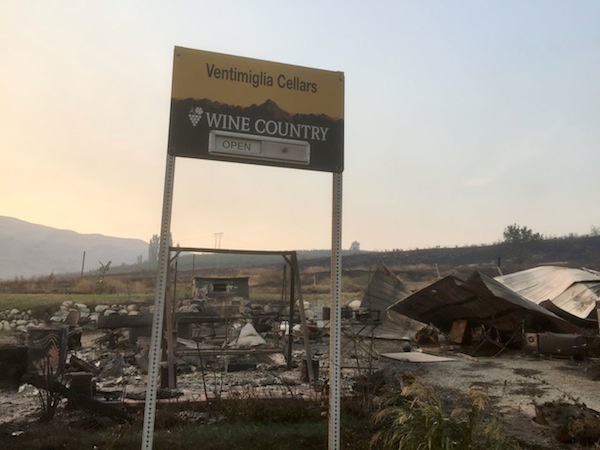 LAKE CHELAN, Wash. – A wildfire has destroyed one winery and caused many of the region’s winemakers and grape growers to evacuate.

“I had a few customers in the tasting room when we were told to evacuate,” Ventimiglia told Great Northwest Wine.

They were told to leave the area about 3 p.m., and the building went up in flames by about 9:30 p.m. Ventimiglia got out of the winery with two cases of wine and his computers. The rest – including 250 cases of finished wine and 40 barrels filled with wine from the 2014 vintage – were destroyed.

Even though his winery was in a metal building, the fire still managed to consume it, he said. He left his irrigation system on with the hopes of keeping his surrounding grass wet to perhaps slow the embers, but all the sprinkler heads melted.

The fires, which have burned more than 100,000 acres so far, were ignited by a Friday morning lightning storm. At least 70 homes and buildings have been destroyed. 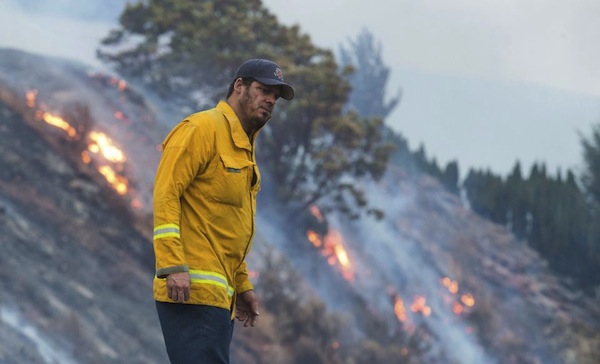 Judy and Don Phelps, owners of Hard Row to Hoe Vineyards in Manson, had to evacuate their home.

“We’re trying to maintain,” she said. “It’s really bad here. Smoke and fire are affecting everything.”

The couple – she’s the winemaker and he’s the vineyard manager – were at Seattle-Tacoma International Airport on Friday, getting ready to head to the East Coast. Just as they were in line to board the plane, they began receiving texts and phone calls from neighbors and friends that the fire had gotten out of control.

“We knew things had gotten bad, so we turned around and got back home.”

Their house is seven miles from the winery.

The fires are on both shores of Lake Chelan, she said.

Dean Neff, co-owner of Nefarious Cellars on the south shore, said he’s been fortunate so far and has been out of harm’s way.

“We’re kind of in between two fires,” he said. “One is on Chelan Butte, and one is up the lake from us.”

Last year, Neff’s vineyard near Pateros was affected by the Carlton Complex wildfire that destroyed much of that North Central Washington community. Neff lost about 50 vines and most of his deer fence, so he felt fortunate to have escaped relatively unscathed. 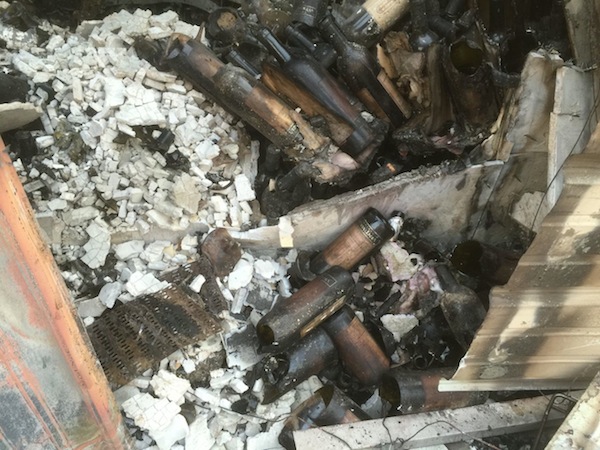 Even amid the fires and smoke, Lake Chelan winemakers must continue to think about harvest, which is looming.

“Everyone is still working,” Phelps said. “Farm life is continuing.”

She said she and her husband have provided masks for any employees who work outside.

“Smoke taint is a concern,” she said. “A lot of ash is falling and covering everything. We’re going to try to wash the grapes when they come in. Most vineyards are netted up here, and that protects the grapes from the ash.”

She said she was out in the vineyards on Monday to sample berries and figured she’s at least a week away from picking the first grapes, which likely will be Pinot Noir for sparkling wine.

“Tempranillo tested at 22 brix, so that has a ways to go still,” she said.

Brix is a measurement of sugar content in fruit.

Neff said his Pinot Gris is getting close, and he’s planning to move some of his harvest equipment into place to be ready.

“We’re still well ahead of schedule,” he said. “The smoke cover hasn’t changed that.”

Even Ventimiglia, who no longer has a winery building, must figure out how to bring in grapes – and where they’ll go to be vinified. He’s working on a plan for that with the expectation of having a new building up once his insurance is figured out.

The fires came in the midst of tourism season, which is vital to the Lake Chelan economy. The region makes most of its tourism dollars in July and August, said Neff of Nefarious Cellars.

“Hopefully, our summer is not completely lost,” Neff said.