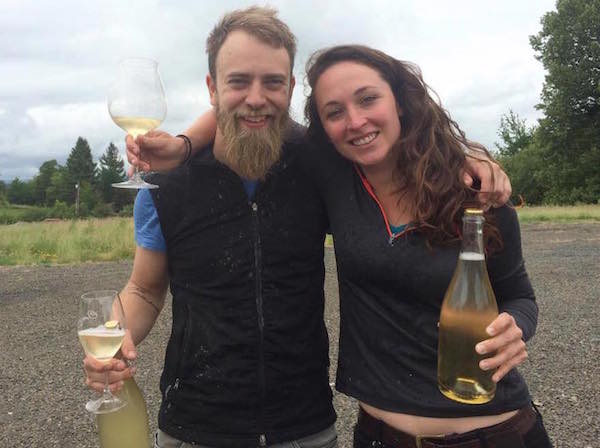 Luke Mathews and Meredith Bell are co-winemakers and share ownership of Statera Cellars in Carlton, Ore. The Kickstarter campaign to support their Chardonnay-only winery received full funding more than a week ahead of the deadline. (Photo courtesy of Statera Cellars)

PORTLAND, Ore. — As of this morning, Statera Cellars is 105 percent on its the way to becoming what it claims will be Portland’s only winery devoted 100 percent to Chardonnay.

There are seven days left in their Kickstarter campaign, but Meredith Bell and Luke Mathews can credit family, friends, colleagues, karma and the Burning Man community with helping get Statera Cellars’ three vineyard-designate Chardonnays to market next spring.

“People in Oregon always have done things differently,” said Bell, who grew up in the Portland suburb of West Linn. “We like to be unique and are used to thinking outside of the box. And our approach to Statera is a less-traditional business model.”

Bell and Mathews, her business partner/co-winemaker, headlined their crowdsourcing effort as “Statera Cellars — Chardonnay, not chemicals.”

The wines were created with neutral oak, feral fermentations and no chemicals – other than the sulfides that will be used at bottling.

Their portfolio would seem to be a perfect fit for the Willamette Valley and the renaissance of Chardonnay as many of Oregon’s top producers are applying much of their Pinot Noir expertise to the world’s most famous white grape of Burgundy. Bell said she was in her element earlier this year at the Oregon Chardonnay Symposium.

“It’s definitely become really cool to drink Chardonnay again, and the grapes would be way less expensive if it weren’t,” she said. 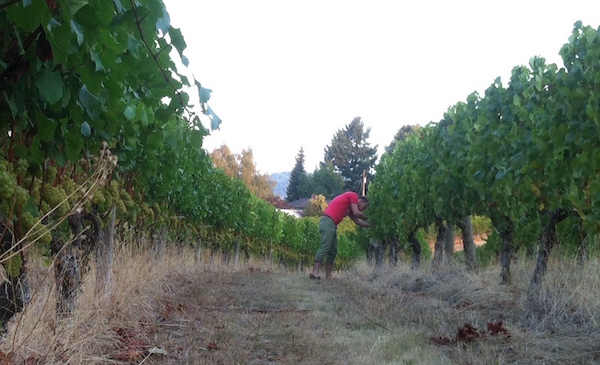 Relationships built along the way have gotten Statera into three special vineyards.

“We want old vines and fruit that is farmed well,” Bell said.

Statera Cellars also will have single-vineyard Chardonnay from the Van Duzer Corridor-influenced Johan Vineyards — one of the Willamette Valley’s few Demeter-certified biodynamic vineyards — as well as Anderson Family Vineyard in the prestigious Dundee Hills.

“I’ve been working with Cliff (Anderson) for a while, and it turns out that I played basketball against his daughter when I was in high school,” Bell said. “It’s very sought-after and very expensive fruit, and when I told him what Luke and I were doing, he said, ‘Sure.’ ”

All seven barrels of the Statera Cellars wines are being made at Omero Cellars in Carlton, where Bell works as assistant winemaker to Chad Stock.

“I wouldn’t be working here if not for Chad,” she said. 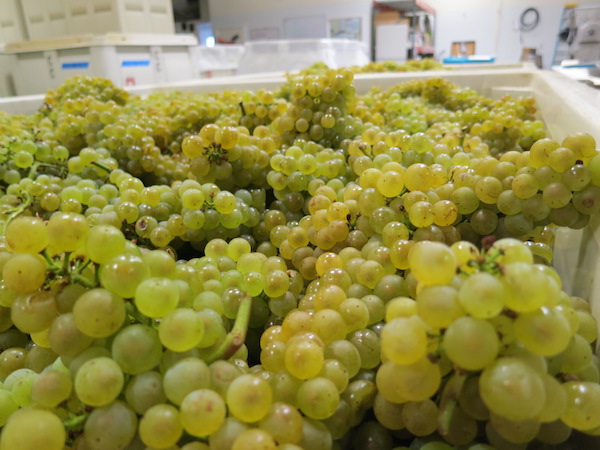 Chardonnay harvested in 2014 from Anderson Family Vineyard in Oregon’s Dundee Hills will be bottled and released next year by Statera Cellars. (Photo courtesy of Statera Cellars)

After a long search for a name for their brand, Bell and Mathews arrived at Statera, a Latin word that refers to balance.

“Equilibrium has been a constant theme of my life,” Bell said. “I left UCLA with not necessarily an amazing understanding of chemistry but an appreciation of equilibrium and how it concerns everything around us.”

Statera Cellars is no hobby project for Bell. It’s been years in the making, starting with her degree in biochemistry from UCLA in 2007 and followed by two years as a Peace Corps volunteer in Mauritania. Her experience in the small West African country — a former colony of France — deepened her appreciation for wine and the Willamette Valley.

“I found myself in an Islamic republic where wine is illegal,” Bell said. “I realized that I really care for wine. I missed it, and it became really important to me. I also knew that I wanted to be back in the Willamette Valley, and part of what I liked about wine is that it could bring me home.”

Her path back to the Willamette Valley began in the Umpqua Valley, working the 2009 vintage for River’s Edge Winery. Bell counts Elkton grower Nathan Wood as her first friend in the wine industry, and she immediately bonded with River’s Edge owners/chemists Mike and Vonnie Landt.

“It was perfect for me because they also have a background in biochemistry so we spoke the same language and shared concepts that I could appreciate,” Bell said. “They are such lovely people who became very invested in me.”

In 2012, she traveled to Burgundy to work at famed Pinot Noir producer Domaine de la Pousse d’Or in Volnay, an experience that helped also inspire the dream of Statera.

“Who better to learn from and experience Pinot Noir, but I was like holy shit, the Chardonnay stole the show for me every time,” Bell said. “I kept making trips up to Chablis, so while I thought I was supposed to there for the red wine, it turns out I wasn’t.” 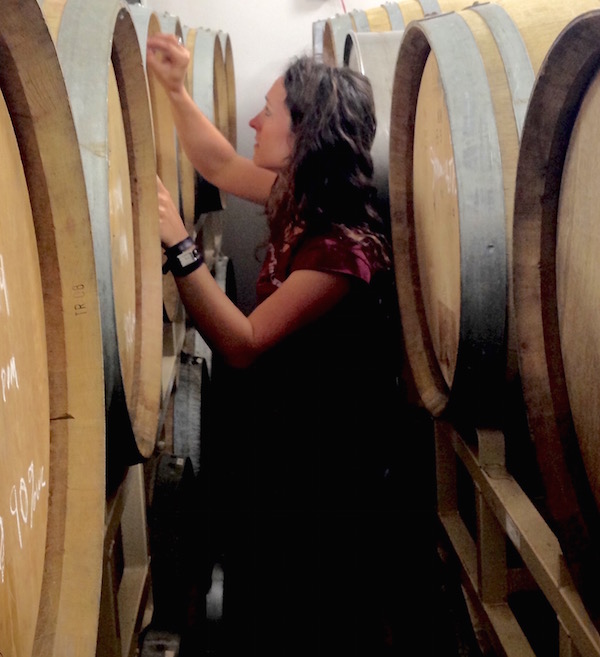 Those wines, in addition to a 2013 harvest at Bass Phillip in Australia, helped form the style of Chardonnay that Statera Cellars strives for — when the vintage permits.

“I don’t want them to be super rich,” she said. “I really like high acid, and these wines don’t have as much acid as I would like, but that’s the fruit we got in 2014.”

And while the stated laser focus of Statera is Chardonnay, Bell agrees with those who live by the concept of “never say never.”

“Where we will be in 10 years? I can’t make any guarantees,” she added.

Based on the cost of their fruit, Bell estimated price of the Statera Cellars wines will range between $30-$40 per bottle, and the debut vintage won’t stretch much beyond 150 cases. And she freely admits her personality might not be cut out for sales.

Fortunately, Mathews, 33, has a strong background in sales, marketing and hospitality. The longtime Oregonian resident headed up hospitality for Anne Amie prior to managing marketing and the wine club for Thomas and Kate Monroe, the dynamic husband/wife team behind the successful Southeast Wine Collective in Portland.

“He enjoys working for them and networking with them, and they are very good selling,” Bell said. “The experience he’s getting from them will definitely be to our advantage.”

Three years ago, Bell, 31, received her master’s in enology from UC-Davis, earning several industry scholarships along the way. She enjoys the lab, the vineyards and the camaraderie of winemaking.

“In general, I’m a pretty social and pretty happy person, but I’m not a person for bullshit,” she said flatly. “I’m not one who is into telling a story and putting a spin on it. I’m very blunt and very honest, which is not always to my advantage, but that’s my nature.”

“He’s a good and very talented friend in the advertising world who had quit his job and had some free time,” she said.

Cantor’s memorable promotional campaign for Statera Cellars also seems to reflect some of Bell’s personality. Even the grapes do a bit of  dancing, an activity that ranks high for Bell and Mathews.

“It’s that whole Burning Man thing,” she said with a chuckle. “We do a lot of dancing. Electronic and house music from LiL LuLu and labels like Dirty Bird Records that have DJs that fall under their brands. All my interns will become inundated with my music this fall!”

No doubt there will be some happy dancing at 9:43 a.m., Saturday, Aug. 29, when their funded Kickstarter campaign concludes successfully — and a day before the start of Burning Man. The hot 2015 vintage and its early harvest means Bell won’t make it to the festival to thank many of Statera’s backers in person. Her next trip to the Nevada festival might need to wait for a year that brings a cooler vintage and an October harvest.

“I hope we get a 2011 every once in a while,” she said with a chuckle. “The epicenter is the event, but participation in the Burning Man community is year-round.”