GEORGE, Wash. – Freddy Arredondo didn’t start out his adult life with thoughts of being a winemaking. Quite the opposite.

Arredondo, head winemaker for Cave B Estate Winery near this Central Washington town, was always going to be a chef.

“I started cooking at 13 years old,” he told Great Northwest Wine. “My parents had a little Mexican takeout restaurant in Southern California. I started working there in junior high.”

From there, he became a trained chef, traveled the world, then fell in love – with a woman and wine. That propelled him on a path toward developing into one of Washington’s rising winemaking stars. 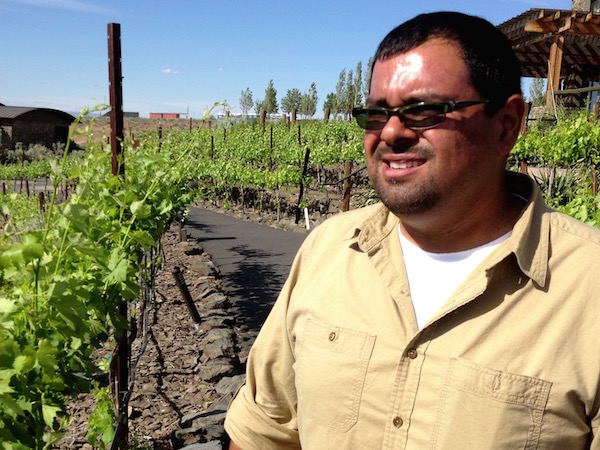 Arredondo worked at his family restaurant through high school before moving to Arizona to study at the Scottsdale Culinary Institute.

After that, he headed to Las Vegas, then worked on a cruise ship in Hawaii before moving back to Los Angeles.

Then the wine bug bit. Arredondo traveled to northwestern Italy, where he studied at the Italian Culinary Institute for Foreigners and earned a “master in Italian cuisine” certification.

While in the Piemonte region, he began to learn about wine. He not only fell in love with Barolo, but he also met his future wife, Carrie Bryan, who grew up in Washington.

“She was in the same culinary program,” he said. “We became phenomenal friends while we were going to school.”

After returning to the United States, they didn’t start dating for about two years. But once they did, they became engaged and married within a year.

“It went kind of quickly,” he said with a grin.

Connection with Cave B

Bryan’s family has a long history in the Washington wine industry. In the late 1970s, her parents, Vince and Carol Bryan, bought land near the town of George above basalt cliffs that rise above the Columbia River. Their intention was to plant grapes and start a winery.

“It was thought to be a little too far north,” Arredondo said. “With all the climate change, it’s actually ridiculously warm, and we’re able to easily ripen fruit.”

So they planted vines in 1980 and later opened their winery, Champs de Brionne. Adjacent to the winery was a natural amphitheater, so the Bryans built a small concert venue with the hope of attracting visitors who might want a bottle or two of wine.

The Gorge Amphitheater was born. It became such a huge hit during the next decade that the Bryans sold the amphitheater – and closed Champs de Brionne – in the mid-1990s.

The Bryans kept their vineyard, selling the grapes to other wineries. In 2000, they got the itch to get back into the wine game. So they hired Brian Carter of Brian Carter Cellars as their consulting winemaker to make a few barrels. That expanded each year, so in 2004, they hired Rusty Figgins of Walla Walla as their head winemaker. 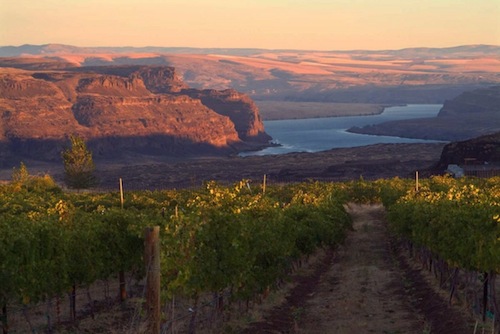 With Arredondo at the helm, the quality of Cave B’s wines have steadily risen. At this summer’s annual North Central Washington Wine Awards, Cave B earned six gold medals. This kind of success has become a regular occurrence for Arredondo and his wines.

He believes his culinary background helps with some of that success.

These days, Arredondo crafts about 20 wines, everything from a bone-dry sparkling wine to an ultra-sweet Semillon ice wine. In between are crisp whites and suave reds.

Higher acidity and lower alcohols mean more food friendliness, Arredondo said. And right on the property is a great place to test that theory. In addition to the Cave B tasting room, the Bryans also have built a hotel and a restaurant called Tendrils. It’s a wonderland for wine lovers.

And it’s right next door to one of the great concert venues in North America. Arredondo has the equivalent of a front-row seat to every concert from the winery next door, and he annually attends three to five shows – including at least one Dave Matthews Band concert.

And those concerts still help the Bryans sell wine.

“We do get a lot of traffic through the tasting room,” Arredondo said. “It’s a great introduction to have people taste the wine. We are all about that concert crowd. We love them.”

Those who don’t want to make the two-and-a-half hour trek from downtown Seattle to Cave B (and you really should make the effort because it’s a stunning setting), Arredondo’s wines are for sale at bottle shops throughout the Puget Sound region. The winery also has a tasting room in Woodinville.