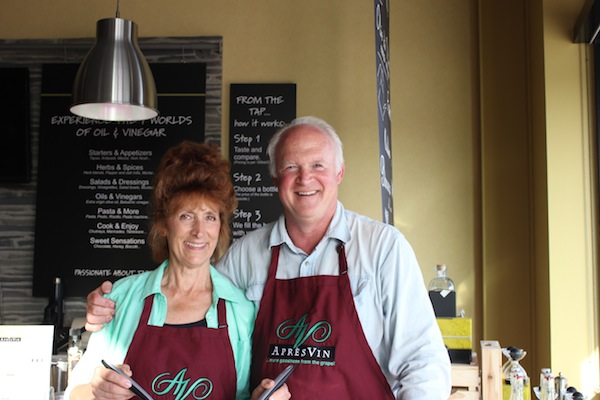 PROSSER, Wash. – Washington’s modern wine industry can trace its roots back to 1962, when a group of University of Washington professors launched Associated Vintners. It was the first winery in the state to focus solely on wines made from European (vinifera) grape varieties.

Now the son of one of those men is on a quest to turn the state’s wine industry into one that is more environmentally friendly while also creating a line of delicious gourmet products.

Eric Leber and Lori Ramonas are the owners of AprèsVin, a small company that transforms hundreds of thousands of pounds of Columbia Valley wine grape seeds into fantastic oils and other products, all while reducing the tremendous amount of waste byproduct into something useful and beautiful.

We recently traveled to the tiny Yakima Valley community of Whitstran to see the operation in action and to chat with Leber and Ramonas.

AprèsVin born out of wine industry 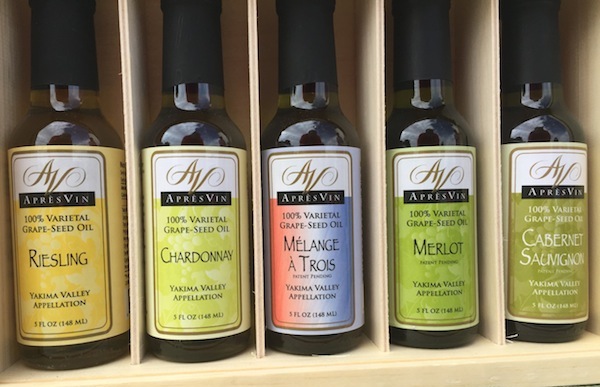 Leber’s father, Ted, was one of the original founders of Associated Vintners – and he’s one of three still alive. They began their quest for world-class wines in the late 1950s and officially launched AV in 1962.

Eric Leber recalls helping to plant AV’s first vineyard on Harrison Hill near the Yakima Valley town of Sunnyside in 1962 when he as a young teen. 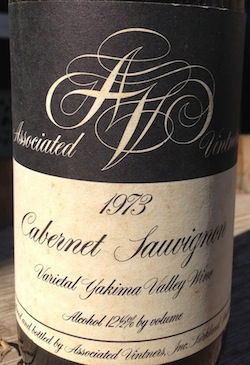 Associated Vintners started in 1962. This is a bottle of AV 1973 Cabernet Sauvignon from the Yakima Valley, likely from the estate Harrison Hill Vineyard. (Photo by Andy Perdue/Great Northwest Wine)

“It was an interesting experience,” he told Great Northwest Wine. “I didn’t really appreciate how important it was at the time. I was a 13-year-old slogging through the deep dust and soil on Harrison Hill. It was a fascinating adventure.”

Through the years, AV evolved, changing its name to Columbia Winery in the late 1970s with the arrival of David Lake, who was its winemaker for decades. Today, Columbia Winery is owned by Gallo.

Eric Leber became a professor of organic chemistry and taught at Heritage University in Toppenish. This led him to explore the idea of squeezing oil out of wine grape seeds.

“I needed some way to demonstrate to my students the relevance of organic chemistry,” he said. “So we went around to a number of agricultural operations in that part of the Yakima Valley and eventually settled on wineries and the byproducts of winemaking as a source of raw material.”

In 2007, Leber and Ramonas – who met as students at Yale University – launched AprèsVin as a retirement project of sorts. They view the business as not only a way to create gourmet local products but also to serve as environmental stewards. 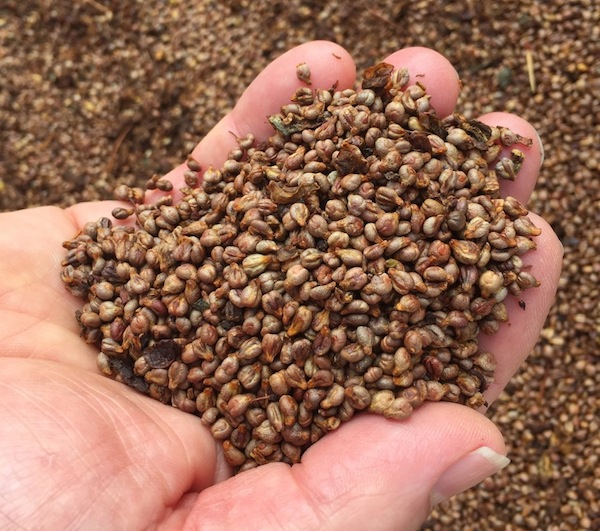 Eric Leber holds a handful of dried wine grape seeds from Chardonnay grapes. AprèsVin will use about 400,000 pounds of wine grape seeds each year to make its oils and other products. (Photo by Andy Perdue/Great Northwest Wine)

In the early days of the business, the couple would get the seeds – along with gooey grape skins and other byproducts of crushed grapes – and would have to figure out how to separate, clean and dry the seeds.

Today, they have the process down pat, thanks to the help of FruitSmart, a processor that takes the crushed grapes delivered by the wineries, then removes and dries the seeds. It’s all done in the tiny community of Whitstran, which is north of the Yakima River, not far from Prosser.

The grape skins are then returned to the wineries, where they can be used as organic fertilizer in vineyards. They also might go to composting operations or dairies where they will be used as cattle feed.

In other words, every bit of that waste is used. And that goes for the tiny seeds.

“We save the small pieces,” Leber said. “We dry them to get the water out of the seeds.”

Once the process is complete, there is no hurry to press the oil from the seeds. In fact, Leber and Ramonas store them in totes until they are needed. This year, they will make about 3,000 gallons of grape seed oil.

To produce that much, they must use about 400,000 pounds of wine grape seeds. That seems like a lot, but the couple point out that they bring in perhaps 3 percent of the available seeds produced by the Washington wine industry.

“There’s a lot of resources that presently we don’t use,” Leber said. 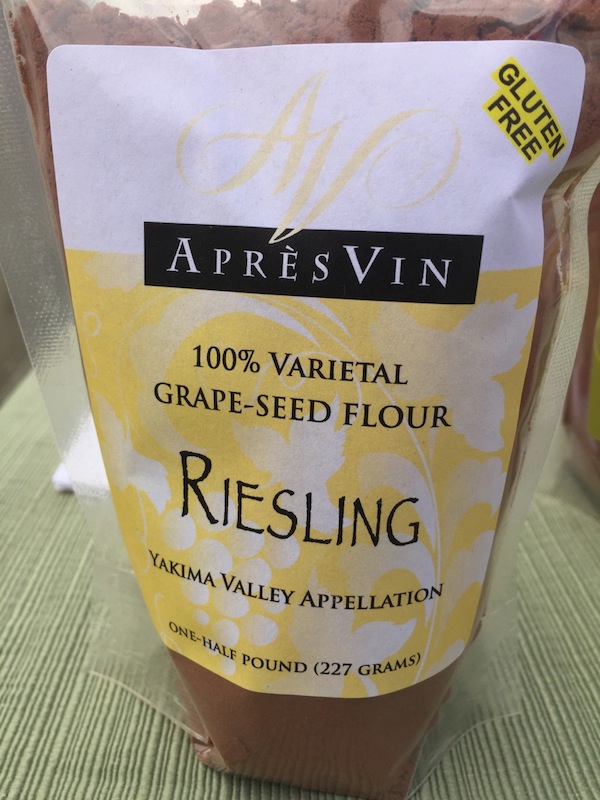 Interestingly, they all exhibit different flavors when their oils are extracted, Ramonas and Leber said.

Riesling grape seed oil is the lightest, with green, grassy notes and just a hint of citrus. Chardonnay oil is rich, round and buttery with a bit of hazelnut and toasty notes. The seeds for both of these oils come from grapes before the wine is fermented.

However, Merlot and Cabernet Sauvignon seeds and skins are left in the wine grape juice during fermentation to pull out color and flavor, primarily from the skins. As such, the seeds also go through fermentation. Leber said that while their Merlot and Cab oils don’t have alcohol, they do have as many as 50 different aromas and flavors imparted during the chemical process of fermentation.

The Cabernet Sauvignon oil is bursting with a variety of fruit flavors, while the Merlot oil is the most complex of the four varieties, revealing chocolate and umami notes.

Leber and Ramonas have noticed stark differences in oils depending on how warm or cool the year is. In wine, this is called vintage variation. And it seems to happen in the oils, too: A cool year will be much different than a warm year. Additionally, seeds from grapes picked early in the season (in August this year) produce different flavors than the same variety picked, say, in October. In other words, hang time affects grape seed oil, too.

The oil is only about 10 percent of a seed’s content, so AprèsVin takes the other 90 percent – which at this point is a dry solid – and mills it into a highly nutritious and gluten-free flour. Leber and Ramonas keep the varieties separate, so customers can actually buy Merlot, Cab, Riesling and Chardonnay grape seed flours. These flours can be used in baking, sauces, soups and stews.

“In each case, the soap not only has the oil, but also has some coarsely ground corresponding grape seed powder, which serves as an exfoliant,” Leber said. “You get those wonderful oils, you get the cleaning and scrubbing action of the exfoliant, and you get a lot of antioxidants.”

If that isn’t enough, they also produce a Chardonnay smoked sea salt using Chardonnay vines that have been sent through a chipper.

“It turns out that Chardonnay vine, when it smokes, produces a wonderfully complex smoke,” Leber said. “It’s not as sweet as, say, an applewood or a cherrywood. It’s a very sophisticated smoke.” 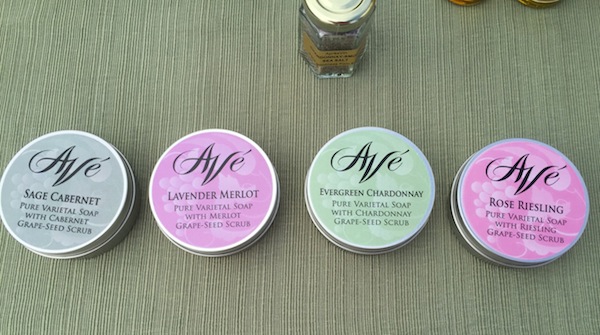 Leber sees part of his legacy – as the son of one of the wine industry’s founders – as environmental, to help make wine production more sustainable.

Not only that, but AprèsVin also is creating products that are healthy. Grape seed oils have higher smoke points than olive oils, so they can be heated up to 100 degrees higher than olive oils before they start to burn. They are loaded with vitamin E, antioxidants and phytonutrients.

They also are extremely shelf-stable. While olive oils are best when used six months to a year after being pressed, grape seed oils can easily last twice that long. And while olives must be pressed soon after harvest, grape seeds can be stored for a couple of years before they are used (AprèsVin has too much demand for its oils to hold the seeds for long, though).

And thanks to a company called Oil & Vinegar, AprèsVin oils are available across North America. This has turned the couple’s small retirement project into a pretty big operation.

In the Northwest, AprèsVin oils are available at Oil & Vinegar stores at Bellevue Square, Clackamas Town Center south of Portland and River Park Square in Spokane. Oil & Vinegar also has stores along the Eastern Seaboard, in the Southwest and four locations in Canada.

The products also have caught the attention of Seattle-area chefs.

“Chris Weber from The Herbfarm (in Woodinville) is perhaps the most enthusiastic user, not only of our oils, but also of our milled flour,” Leber said. “We’re delighted with the kind of reception we’ve had.”