A worker operates a mechanical harvest at Hilltop Vineyard near the Yakima Valley town of Zillah, Wash. Chardonnay grapes were brought in Aug. 7 for Treveri Cellars in the Wapato, Wash., making this one of the earliest harvests in state history. (Photo by Andy Perdue/Great Northwest Wine)

In a typical year in Washington wine country, hardly any grapes would be harvested by Sept. 4. Maybe a little Sauvignon Blanc or Chardonnay.

But 2015 isn’t a typical year. In fact, it’s tracking to be the warmest vintage in the history of the Washington wine industry. As a result, many wineries already are third of the way through harvest – and it isn’t even Labor Day.

As strange as this hot year is and how early harvest began, the quality of fruit so far has been remarkable, winemakers told Great Northwest Wine. They view it as an anomaly, and so far, they’re thrilled.

“It’s an amazing vintage,” said Chris Upchurch, head winemaker for DeLille Cellars in Woodinville and owner/winemaker for Upchurch Vineyard on Red Mountain. “This is a one-of-a-kind year. I’m floored by it. Everything I’ve brought in has been outstanding.”

Upchurch said he is averse to picking grapes with any green flavors, so he would normally let grapes hang and risk accumulating additional sugar than harvest underripe fruit. So far, that hasn’t happened.

“You’d think you’d have to get it ultra-ripe to get the flavors,” he said. “Normally, we’d have to let it go until the greenness goes away. But so far, so good.”

Lower alcohols in a hot year? 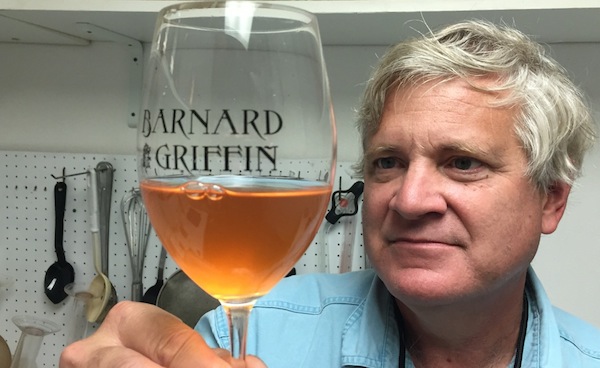 Rob Griffin, owner and winemaker for Barnard Griffin in Richland, Wash., takes a look at just-pressed Pinot Gris. By the time Griffin’s winemaking team is done with this juice, it will be a clear white wine. (Photo by Andy Perdue/Great Northwest Wine)

Upchurch said the irony of 2015 is that because winemakers are picking earlier than usual without flavor issues, alcohol levels actually could be lower than expected (though not necessarily low). He’s been picking Syrah and Merlot at around 24 to 25 Brix, which could equal alcohol by volume (ABV) of about 14 percent.

“We’ll see,” he said. “It’s not over yet. It’s cooled down a bit, so Cab will get a little more hang time. If Merlot is like this in August, what will Cab be like? The answer is it will be great. I’m really excited about this vintage. I’ve never seen this before.”

Rob Griffin, owner and winemaker at Barnard Griffin in Richland, said he is just about done bringing in Syrah, and he plans to harvest his first Merlot on Monday.

“That’s another record for that vineyard,” he said, adding, “But everything is a record this year.”

Griffin, who harvested his first Washington grapes in 1977 as head winemaker for Preston Wine Cellars in Pasco, said he is seeing Cabernet Sauvignon at good maturity already.

Griffin noted that secondary signs such as brown seeds also give him the indication that even normally late-ripening Cabernet Sauvignon could come massively early.

“We’re going to have to get in there and pick this stuff,” he said.

Temperatures starting to drop a bit

Marty Clubb, owner of L’Ecole No. 41 in the Walla Walla Valley, is happy with the quality he has seen so far during the 2015 harvest. (Photo by Andy Perdue/Great Northwest Wine)

Clubb said some areas, particularly the Wahluke Slope, are even further ahead than expected. Fortunately, he said, weather the past couple of weeks have given winemakers a break by being cooler.

“It’s been a blessing,” he said. “We’ve had moderate temperatures since mid-August. This is picture-perfect. I’m really happy.”

Clubb noted that bud break was two to three weeks early, as was fruit set and veraison. It’s as though the entire season has shifted forward three weeks. The Columbia Valley normally sees triple-digit temperatures in mid- to late July, but that came in late June and early July, then settled into highs in the 90s throughout July and the first half of August.

“The early part of September has felt like later in September,” he said. “This is one of those years where it is way ahead of the curve. But this final period is giving us high quality. I was worried about the heat last year, yet this year is ahead of last year. Both years are shaping up to be very strong.”

L’Ecole is bringing in a lot of Sèmillon right now, though it also has picked Merlot and Syrah from StoneTree Vineyard on the Wahluke Slope and Bacchus and Dionysus in the Columbia Valley north of Pasco. He’s even brought in a little Merlot from Seven Hills Vineyard in the Walla Walla Valley.

“I was sampling everything in Walla Walla, and it was hard to find something that wasn’t 24 Brix,” he said. “We’ll have a little bit of a sugar issue this year, but it will be no more extreme than other years.”

Upchurch brought in his first Syrah of the season on Thursday, and he was excited.

“It’s deep, dark, delicious and balanced,” he said. “If you like concentration, this is the year. It’s going to be powerful stuff. The initial fruit is something I’ve never seen before. I’m totally jazzed.” 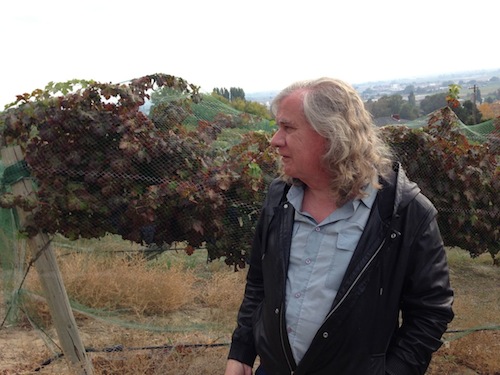 Chris Upchurch of DeLille Cellars in Woodinville says the quality he is seeing so far in 2015 is unprecedented. (Photo by Andy Perdue/Great Northwest Wine)

Clubb, who has brought in about 175 tons of grapes so far, said the harvest has been a little on the light side so far.

“It’s lighter than we were expecting,” he said.

“The only thing we’ll be able to gripe about is lower quantity,” he said.

Griffin hasn’t picked any Sangiovese yet, which he uses for rosé. He makes more than 10,000 cases of his award-winning rosé of Sangiovese, a huge jump in production from years past – yet he still can’t keep it in stock. The wine was released on Valentine’s Day in February and sold out in July. Now he’s toying with the thought of asking some of his growers to plant more. Not that it will help him this year.

Upchurch said crop size has been all over the board. He has seen a little reduction because of clusters being damaged by sunburn and dehydration.

Clubb said he has been able to pick up enough extra fruit to make up for any shortfalls, and he anticipates bringing in a total of 700 tons, which will fill his facility.

Upchurch is targeting about 550 tons for DeLille.

Griffin will harvest about 800 tons, which is similar to last year.

“We’ve brought in close to 200 tons, and it’s barely September,” he said. “There have been years when we’ve gotten into October before we’ve had this much fruit harvested.