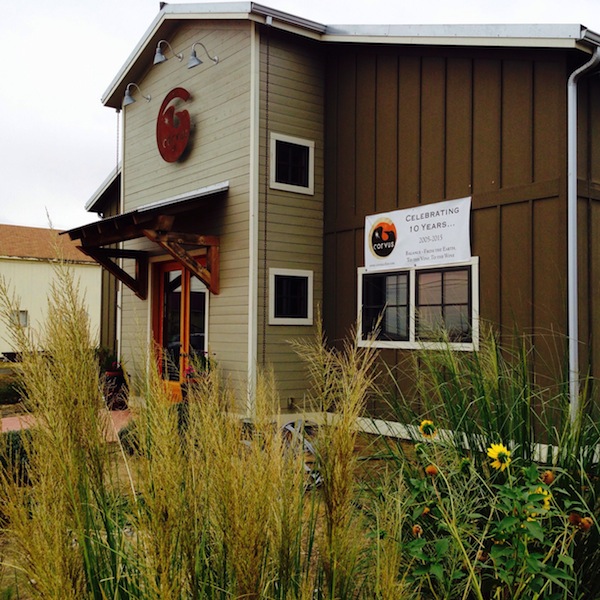 Corvus Cellars has moved to the location of the former home of Mannina Cellars at the Walla Walla Regional Airport. (Photo courtesy of Corvus Cellars)

WALLA WALLA, Wash. – Corvus Cellars, a Walla Walla winery with a Red Mountain estate vineyard, has moved – but not far.

Corvus, which began in 2004, has moved from one of the Port of Walla Walla incubator buildings at the airport to a nearby building. The incubator buildings are available to new wineries for up to six years, at which time they are expected to “graduate” to a different facility and make room for another new producer.

“We were at five years,” said Randall Hopkins, co-owner of Corvus Cellars with winemaker Steve Lessard. “So we knew that within the next year, we’d have to move out. We wanted to do it on our schedule rather than the port’s.”

Corvus Cellars’ new location – 760 C St. – is just around the corner, in the building that was occupied by Mannina Cellars until it went out of business earlier this year. The land and building are owned by the Port of Walla Walla, so little has changed for Corvus Cellars, other than its address.

Hopkins, who lives in Walla Walla and works for a consulting firm, said the incubator building has worked well for Corvus Cellars. Though the winery had been around for a half-decade before it moved into the incubator, it never had a tasting room, having operated from within Whitman Cellars for five years.

“We liked the airport district and wanted our own identity,” Hopkins told Great Northwest Wine. “It was 2010, and not as many wineries were opening then. We’d never had a tasting room, so it worked for all of us. It was easy.”

Corvus Cellars has expanded its hours and now is open Friday through Sunday or by appointment. 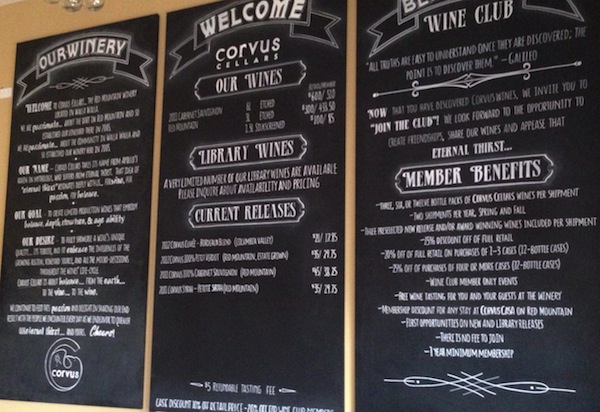 Corvus Cellars began when Hopkins – then living in the Tacoma area – and Lessard met in 1995. Lessard was head winemaker for Hedges Family Estate on Red Mountain, and Hopkins was a consumer who was intensely interested in learning the wine business. Hopkins started volunteering to work harvest and later got in some cellar work at Hedges Cellars.

Ultimately, the two started discussing the possibility of launching their own winery, but then Lessard’s location changed, as he was offered a position at a new Walla Walla winery called Whitman Cellars. Lessard moved to Walla Walla in 2001.

The two started Corvus in 2004, and their first vintage was 2005. That same year, Hopkins purchased 6 acres of land on the south end of Red Mountain and planted Cabernet Sauvignon, Cabernet Franc, Petit Verdot, Petite Sirah and Mourvèdre. Today, his neighbors include Upchurch Vineyard and EFESTE. Though he draws his water from two wells on the property, he’s also hooking up to the Kennewick Irrigation District’s Red Mountain system as a another source of water.

Hopkins and his wife, Jennifer, moved to Walla Walla five years ago, putting them closer to the vineyard and winery. Damon LaLonde, who manages such vineyards as Red Heaven and Scooteney Flats on Red Mountain and French Creek in the Yakima Valley, handles Corvus Cellars’ vineyard, too. 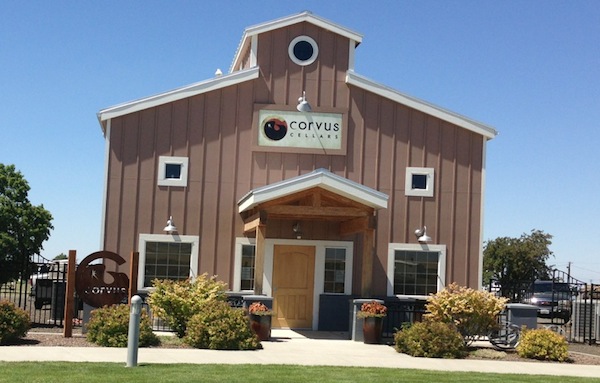 Corvus Cellars spent five years in one of the incubator buildings owned by the Port of Walla Walla. (Photo by Niranjana Perdue/Great Northwest Wine)

In 2011, Whitman Cellars was shuttered and taken over by the bank. In 2012, Walla Walla winery magnate Charles Smith took over the former Whitman Cellars building, purchasing the equipment, inventory and trademark. To date, he has not resurrected the brand.

By the time of Whitman Cellars’ demise, Lessard and Hopkins already had moved Corvus Cellars to its new location in one of the incubator buildings.

Today, Lessard and Hopkins produce about 1,000 cases of red wine for Corvus Cellars, which is just the right amount for the two partners.

“We love selling out every year,” Hopkins said. “Making 1,000 cases is very manageable. We’ll wait to see how things go to see if growing is what we want to do.”

In addition to Corvus, Lessard also represents French wine barrel producer Tonnellerie d’Aquitaine and is a seasonal firefighter. He recently returned to Walla Walla after a summer that seemingly saw most of the state on fire.

“He’s trying to catch up on sleep,” Hopkins said.

Hopkins said harvest at their estate vineyard on Red Mountain is at least a week away.

“The cool weather is helping us a little bit,” he said. “I like that extra flavor development.”

Hopkins and his wife also operate Corvus Casa, a vacation rental in the vineyard. It can sleep 10 people and has a full kitchen and barbecue. It has proven to be popular, booking up regularly from spring through November and even into December.

“People love to sit in an Adirondack chair, absorb the vineyard and watch the sunset,” he said.