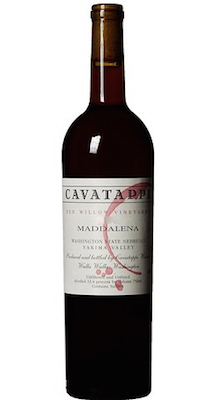 A ski trip to Italy in 1972 not only served to inspire Seattle’s Peter Dow to establish the groundbreaking Café Juanita, but he also sought to offer a house wine reminiscent of those served by Italian restaurateurs. So in 1984, seven years after he launched his Kirkland restaurant, he convinced grower Mike Sauer to sink Nebbiolo cuttings into Red Willow Vineyard. That was two years ahead of the historic establishment of Syrah by Sauer. Both plantings were firsts of their kind in Washington state, and this bottling marks the 25th anniversary of the first commercial harvest of Nebbiolo at Red Willow. The nose is classic with ripe cherries, cinnamon bark, cloves, nutmeg and sweet pipe tobacco. There’s gorgeous purple fruit on the attack akin to President plum, black currant and pomegranate, which are framed by a pleasing structure to the medium tannins and finished with an elegant juiciness. Enjoy alongside the Muscovy Duck Breast and Italian Summer Truffles by Holly Smith, who bought Kirkland culinary landmark from Dow in 2000, or serve with Rabbit Cacciatore.