GRANDVIEW, Wash. – One of Washington’s most prolific winemakers has changed his focus to producing tiny amounts of high-quality wines.

Co Dinn, who moved up through the ranks at Hogue Cellars to become its director of winemaking for six years, now is focusing his efforts on Co Dinn Cellars. He has gone from making about 600,000 cases of wine annually to fewer than 1,000.

“It’s very different,” he told Great Northwest Wine. “I’m the marketer, I’m the handyman, I’m the punchdown guy. I do everything. It’s absolutely the opposite of what I used to do.”

And Dinn couldn’t be happier. While he has many fond memories of his 17 years with Hogue Cellars, being his own boss is what he needs to do right now.

We recently sat down with Dinn at Yakima Valley Community College, where he makes his wine, to talk about his past, present and future.

From Texas to Washington 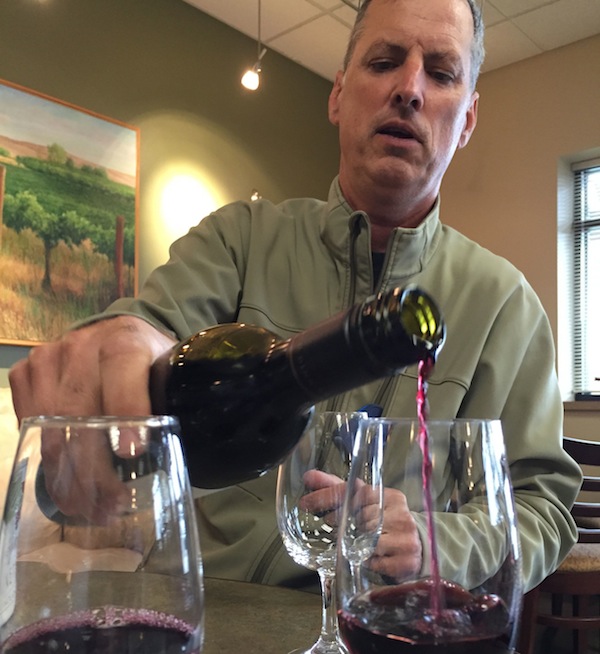 He spent the next three years at such Napa Valley wineries as Trefethen and Sterling until seeing an advertisement for a job opening at Hogue Cellars. Dinn knew little about the burgeoning Washington wine industry, which by 1996 still had fewer than 100 wineries.

“I came up here and was just blown away by the quality of the wine, the countryside and everything about the area,” he said. “The opportunity was fantastic. I just couldn’t pass it up.”

He joined Hogue in April 1996, where he was the white winemaker, working alongside Tony Rynders, who was red winemaker, and David Forsyth, director of winemaking. Wade Wolfe, one of Washington’s most experienced viticulturists and winemakers, was the general manager.

“It was a fantastic place to cut my teeth in Washington,” Dinn said.

By late 2006, Wolfe had departed to focus on his own winery, Thurston Wolfe, and Forsyth left to become the first head winemaker for Mercer Estates. This gave Dinn the opportunity to become director of winemaking, a position he held until leaving in the middle of 2013.

During Dinn’s tenure at Hogue, the winery grew to more than 600,000 cases and went through a couple of ownership changes. The Hogue family sold the operation to Vincor, a Canadian wine producer that later was sold to Constellation. Today, Hogue is Constellation’s only Washington property.

Under the leadership of Wolfe, Forsyth and Dinn, Hogue also became the first major winery in the Pacific Northwest to embrace screwcaps, ultimately converting all of its wines to the alternative closure. Thanks to that experience, all Co Dinn Cellars wines also are under twist tops.

“To me, the consistency, the lack of bottle variation, the fact that the wine that you get from me in those bottles is exactly how I intended it to be, that’s really important,” he said. 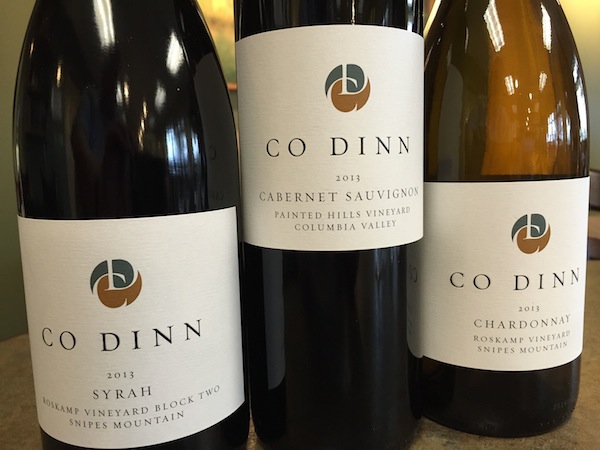 By the time he was ready to leave Hogue Cellars, Dinn had the better part of two decades of Washington winemaking under his belt.

The fact was, though, that as director of winemaking, he was doing little actual winemaking.

“There’s no way one person can make wine at a big winery,” he said. “You can’t even be hands-on because there’s just too much. It takes you away from your more important role as an organizer, an planner and a manager. So ultimately, I wanted to make the wine myself.”

His first Co Dinn Cellars wines, released this summer, are Syrah, Cabernet Sauvignon and Chardonnay, all vineyard-designated – and all delicious. Each is made in small amounts, totaling fewer than 500 cases. These first wines were made at Côte Bonneville in Sunnyside, where he has served as consulting winemaker.

Two of his wines, the Syrah and Chardonnay, come from a special little vineyard on Snipes Mountain in the heart of the Yakima Valley. Snipes Mountain is an American Viticultural Area within the Yakima Valley. It’s not only the second smallest in the state (after Red Mountain), but it’s also home to the oldest commercially used wine grapes in Washington (Muscat vines planted in 1917).

While many wine lovers are familiar with Upland Vineyards on Snipes Mountain, few have heard of Roskamp Vineyard, which is farther west and sits on the spine of the mountain.

“It’s heaven for Syrah,” Dinn said enthusiastically. “Snipes Mountain is a magical place to grow wine grapes. I’m very honored to work with some of the fruit.”

At home in the Yakima Valley 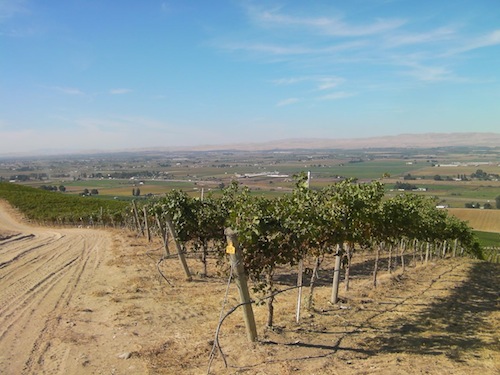 Snipes Mountain is a 1,300-foot-tall ridge in the middle of the Yakima Valley. This is the view looking north. (Photo by Andy Perdue/Great Northwest Wine)

Looking ahead, Dinn still has the 2014 vintage of Co Dinn Cellars in barrel at Yakima Valley Community College, where he leases space. And he’s just about done with his 2015 harvest.

Already, he has Chardonnay from French Creek Vineyard, which is on the north side of the Yakima River just east of Prosser. French Creek was planted in the 1980s, and it was one of the first vineyards he worked with when he arrived at Hogue in 1996. Today, it is under new ownership and is farmed by Damon LaLonde, considered one of the state’s top viticulturists.

Dinn also plans to produce a 2015 red wine from Elephant Mountain, a vineyard in the Rattlesnake Hills, which like Snipes Mountain is a sub-AVA of the Yakima Valley.

Dinn’s transition from large winery to small has been fairly seamless, and his decision on where he wanted to live and craft wines was easy.

“I live on Snipes Mountain, which to me is the epicenter of wine grape growing in Washington,” he said. “I knew this is where I wanted to be. I know you can live far away from the grapes and make wonderful wine, but I like being where the grapes are, being able to get out in 15 to 20 minutes and seeing any of my vineyards. That proximity enables me to be reactive, to know the grapes better, to be neighbors with the growers.”

The Yakima Valley is the Northwest’s oldest AVA, approved in 1983. And it’s the cradle of the modern Washington wine industry, thanks to a plethora of producers who launched their operations soon after Prohibition was repealed at the end of 1933. William Bridgman planted his first wine grapes in Sunnyside in 1914, and Walter Clore – “the father of Washington wine” – worked for Washington State University’s research station in nearby Prosser from 1937 until he retired in 1976.

“I’m part of the valley now,” Dinn said. “I’m planning on being here for the rest of my career.”

Co Dinn Cellars’ wines are distributed in Western Washington by Bordeaux Wine Locators and are for sale at Esquin Wine & Spirits in south Seattle. In the Yakima Valley, they are available at Yakima Valley Vintners on the Grandview campus of Yakima Valley Community College, as well as at the Walter Clore Wine & Culinary Center in Prosser. And in Yakima, they are sold at Stems.