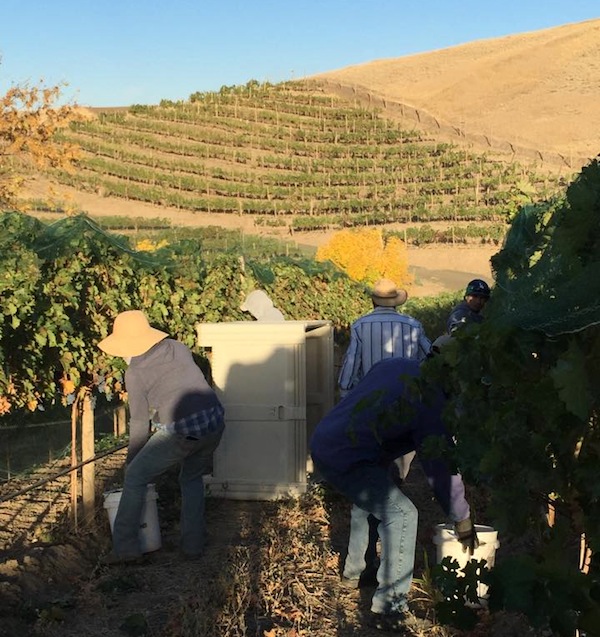 MILTON-FREEWATER, Ore. – One of the most extreme vineyards in the Northwest – perhaps anywhere in the world – has provided its first crop of wine grapes. And by all appearances, it is remarkable.

“We’d jackhammer down about 18 to 24 inches, then put the posts in, then fill it back in with rock and tamp it down,” Driver told Great Northwest Wine. “It holds pretty steady.”

Driver describes Elevation Vineyard as the most-terraced planting in the Walla Walla Valley. About 90 percent of it is terraced because there’s simply no other way to plant without causing serious issues.

“In some areas, there would be no feasible way to farm it going downhill,” Driver said. “Erosion would be a big problem. But terracing avoids erosion and allows us to farm it.”

Each hole, whether for a post or a vine, took about 30 minutes to jackhammer and refill. A typical vineyard in the sandy soils prevalent across the Columbia Valley might take one or two minutes per hole.

“It costs 10 times more to do it this way,” Driver said. “It’s very spendy compared with other vineyards.”

Which begs the question: Why?

“A lot of people ask that,” he said with a chuckle. “We feel the wine will speak for itself. It’s a tough growing environment. I think the best wines come from very challenging growing areas.”

First harvest in the cellar 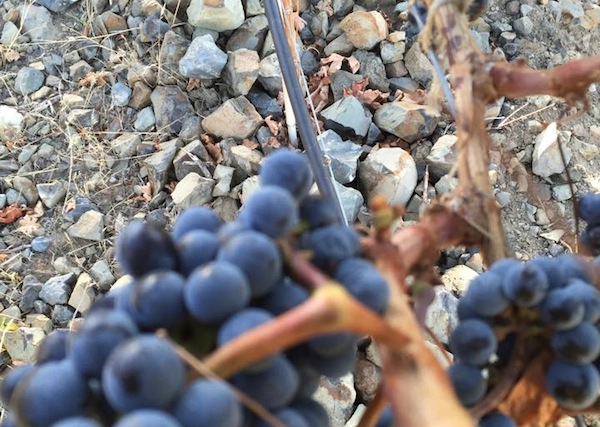 Tertulia Cellars used jackhammers to carve holes out of basalt at Elevation Vineyard. The hard work paid off with the first harvest of grapes this month. (Photo courtesy of Tertulia Cellars)

“It’s smaller than what a typical vineyard would bear because it’s in tough growing conditions,” Driver said. “It’s only about 1.5 tons per acre.”

Even when it’s at full capacity in the next couple of years, Driver can’t imagine it peaking much beyond 2 tons per acre.

So far, 15 acres are bearing fruit, with 3 additional acres that will come on as early as next year.

“There are some things that I didn’t think about,” Driver said.

For example, some of the terrain is so steep and the rows so narrow, his vineyard workers don’t always have room to turn a tractor around to bring bins down to a truck to head to the winery. Instead, they’ll need to uncouple the trailer and circle the vineyard.

The additional 3 acres that will come into production as early as next year will be even more extreme: spacing of 3 feet by 3 feet on a slope that is nearly 45 degrees in steepness.

“That is going to be very difficult to pick,” Driver said.

“It’s not for the faint of heart,” he said with a laugh. 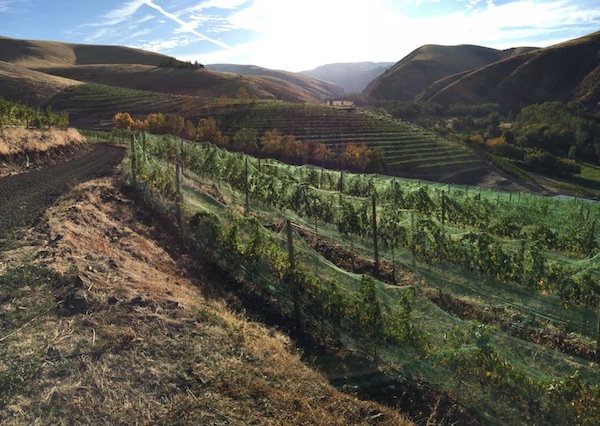 Driver, Raber and O’Connell are more than mildly curious about the wines that will come from this new vineyard, as are many others in the Walla Walla Valley.

“Everyone is excited,” Driver said.

Raber, who is still putting some of the grapes through fermentation, said early indications are remarkable.

“I’m really happy with it,” he said. “Comparing it with other grapes that have come in, I’m already preferring Elevation fruit.”

He said that because of the stress on the vines – thanks to high elevations, low moisture and the basalt – the grapes’ skins are thicker and the berries are smaller. While normally this would result in high-tannin wines, Raber is surprised that these young wines are more plush than he anticipated.

“Those rocks are radiating some heat, and I think that’s softening up the tannins with additional ripeness in the fruit,” he said.

“Ask me again in a year,” he said with a chuckle.

Tertulia Cellars on south side of valley 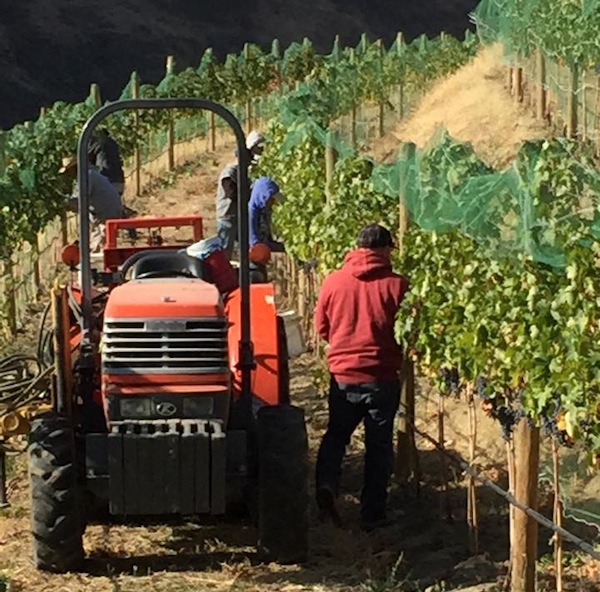 Tertulia Cellars’ Elevation Vineyard is on the extreme edge of viticulture, which occasionally makes it difficult to farm. (Photo courtesy of Tertulia Cellars)

Raber was the first employee hired by Tertulia Cellars back in 2005. After leaving for a couple of years, he returned to the winery in 2011.

Driver, 35, joined Tertulia Cellars eight years ago. He began working at famed Klicker’s Strawberry Acres when he was 12 and later worked for a seed company. He attended Walla Walla Community College and Eastern Washington University to study civil and mechanical engineering. But farming pulled him back to Walla Walla Community College, where he earned a degree in viticulture.

“Engineering was not for me,” he said. “I don’t like being in the office all day. I’ve been farming all my life. I much prefer being on a tractor.”

Driver also manages Tertulia’s other two estate vineyards. Whistling Hills is a 7.5-acre vineyard near Northstar and Isenhower wineries and is planted to Cabernet Sauvignon, Merlot, Syrah, Tempranillo, Roussanne and Viognier. And Riviere Galets is in The Rocks District of Milton-Freewater and is planted primarily to Grenache, though it also has Syrah, Tempranillo, Cabernet Sauvignon, Mourvèdre, Counoise and Carignane.

Neither is quite as challenging as Elevation Vineyard.

O’Connell, who lives in Tucson, Ariz., owns hotels in several states, including the Hampton Inn & Suites in Walla Walla and Spokane.

The third vineyard will mean the Tertulia team will rely almost exclusively on estate grapes for its 3,500 cases of production. The lone exception is Carménère from the Horse Heaven Hills.

O’Connell initially was skeptical of the Elevation Vineyard project and originally was looking at a piece of property nearby when the land became available. With the first harvest in the cellar, he’s pleased with the results.

“In the long run, it’s going to be a great project,” he said.

The first wines from Elevation will likely be released in 2017 or 2018, and because of the small yields, nearly everything will go to Tertulia Cellars’ wine club.