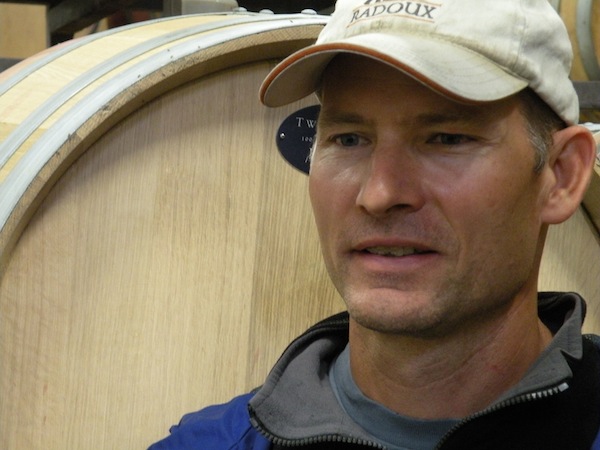 Greg Koenig, owner of Koenig Vineyards in Caldwell, Idaho, has been making wine in the Sunnyslope Wine District for more than 20 years. (Photo by Andy Perdue/Great Northwest Wine)

CALDWELL, Idaho – It has been more than 20 years since a young, energetic man arrived on the Idaho wine scene and helped begin to change the perception of wine being made in the Gem State.

Today, Greg Koenig is a veteran winemaker. He’s not necessarily considered part of the old guard, even if the slightest hint of silver is starting to show up in his hair. With his brother, Andy, he launched Koenig Distillery & Winery in the Sunnyslope Wine District in the mid-1990s and went to work reimagining an industry that, for the most part, was languishing in obscurity.

Though he is a graduate of famed University of Notre Dame and a classically trained architect, Koenig came to winemaking as a hobby and has little formal training – preferring to learn his craft on the job.

Today, Koenig is one of the most recognized and respected winemakers in Idaho. In addition to his eponymous winery, Koenig also crafts the wines for such producers as Bitner Vineyards, Williamson Vineyards and 3 Horse Ranch Vineyards.

We recently caught up with Koenig at his production facility overlooking the Snake River west of Boise. Here’s the interview: 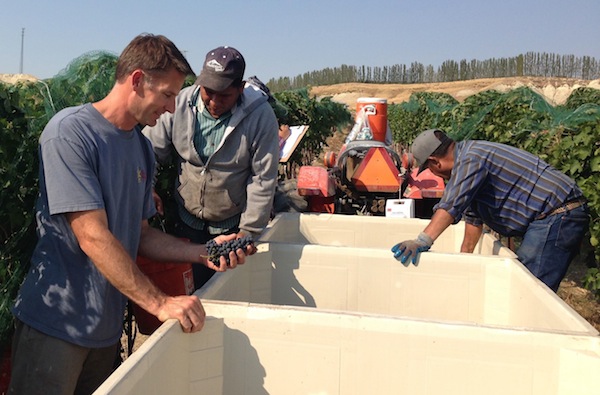 Greg Koenig of Koenig Vineyards inspects grapes as they are harvested at Williamson Vineyard near his winery in Caldwell, Idaho. (Photo by Andy Perdue/Great Northwest Wine)

Koenig was born in Idaho and grew up in the Sun Valley area, where his parents owned acclaimed Knob Hill Inn. And his mother grew up on a dairy farm in Caldwell.

But the family roots go back to Austria, and that set in motion the Koenig brothers’ quest for artisan alcoholic products.

“My brother and I wanted to start a distillery and winery in the tradition of the small Austrian ones that we had seen near my dad’s hometown,” Koenig told Great Northwest Wine. “We wanted to do it here with Idaho fruit.”

Their goal was to re-create the small-production wines and brandies they’d experienced while living in Austria for a few years, and it made perfect sense to do it in Caldwell.

“As kids, we got to spend a lot of time here in the Snake River Valley with my grandparents, who loved to can fruit. We knew about the Sunnyslope district as a wonderful place to grow fruit and, subsequently, wine grapes. This was the place we started looking for land and started to narrow it down to where we wanted to be within the Snake River Valley.”

This is an honest region, where hard work can pay off, where farmers watch sunrises and sunsets from the seats of their John Deeres. The pace of life is a little different, perhaps because of the views.

“It’s a beautiful spot,” Koenig said. “It’s gorgeous with the Owyhee Mountains and the river. Fortunately, all the old fruit growers are still in business here, so there’s this wonderful patchwork of orchards and mint fields and hayfields. It’s a testament to this climate right here. Everything grows. It’s a great agricultural district.”

Now that a substantial wine industry has grown here – about 45 minutes west of Boise – visitors also are able to enjoy the views.

“Consumers love it. They get to come from the surrounding areas and even from out of state. They like to come to this little bucolic spot in the world and tour wineries and visit fruit stands. It’s close enough to Boise, where there’s good restaurants.” 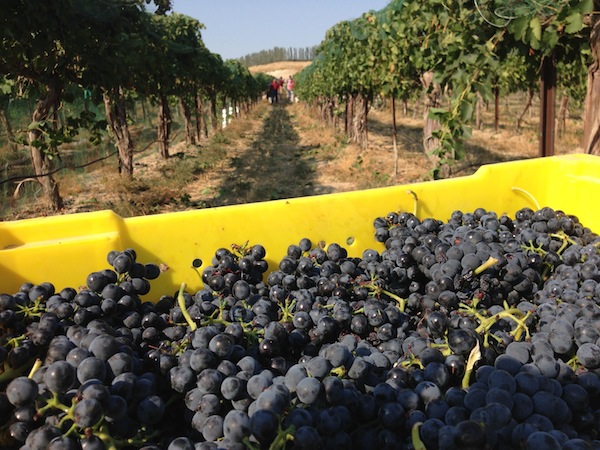 Thanks to better growing techniques, Idaho red wines have steadily improved in the past two decades. (Photo by Andy Perdue/Great Northwest Wine)

When Koenig arrived on the wine scene, Idaho was known for Chardonnay and Riesling. Few had tried to make red wines of any quality. But that was changing.

“There was a little bit of Pinot Noir being grown, but quite frankly, it’s too hot for pinot,” Koenig said. “The problem was a lot of growers back then didn’t understand how to grow cabernet properly.”

Overcropping was the biggest issue, a farming mentality that insists a bigger crop is better. This is fine with some agricultural products, but it doesn’t usually work with wine grapes.

Two winemakers were starting to lead the way around that time. Kevin Mott was head winemaker at Ste. Chapelle, Idaho’s largest and oldest winery. He began producing delicious Syrahs and Merlots in the late 1990s before moving to Washington. (Today, Mott is the head winemaker at Woodward Canyon Winery in Lowden, Wash.) And Brad Pintler, who launched Pintler Cellars in 1987, was pushing quality in reds and experimenting with a wide variety of wine grapes.

“He had a great deal of interest in growing red wine like I did and really went to great lengths to figure out how to grow it here with canopy management and deficit irrigation and all kinds of tools,” Koenig said. “And it didn’t take long. We were able to unlock the fact that you could grow really nice wine here. It’s a cultural thing that we had to change.”

Pintler sold his winery to Corus Brands in Seattle, which renamed it Sawtooth Winery. Today, Corus has transformed into Precept Wine. Pintler is no longer part of the wine industry.

Koenig and his fellow winemakers also found a source of inspiration from one of Washington’s top winemakers. Rob Griffin, owner and winemaker for Barnard Griffin in Richland, made wines more than 15 years ago for Hells Canyon Winery in Caldwell – and also made wines from those vines under his own label.

“Rob is a great winemaker,” Koenig said. “His skills combined with the new growing techniques over at Hells Canyon created this wine that, when we first opened them in the late ’90s, were an absolute lightning bolt for us.”

The wines were so good, Koenig and others couldn’t believe they were made with Idaho fruit.

“Some of us at the table that evening were incredulous that these were actually Idaho grapes because they tasted nothing like what we’d ever experienced here. It was a watershed moment for the industry when Rob was making those wines.” 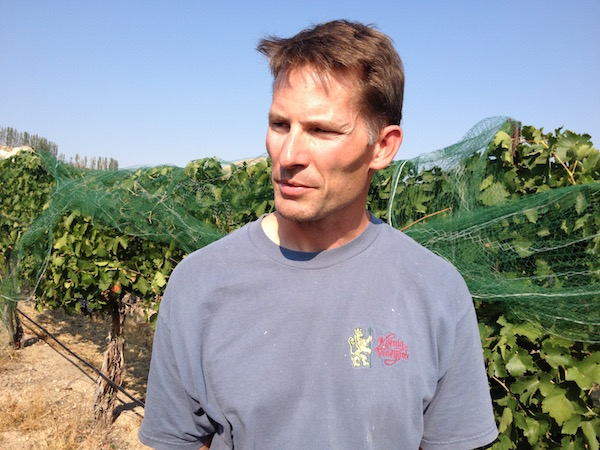 Snake River Valley winemaker Greg Koenig of Koenig Vineyards is purchasing all the fruit from Fraser Vineyard — Idaho’s most expensive source of Cabernet Sauvignon — for the next four years. (Photo by Eric Degerman/Great Northwest Wine)

In the past half-decade, one of the most exciting wineries in Idaho was Fraser Vineyard, which was producing astonishing Cabernet Sauvignon. But a divorce led to the winery’s demise. Today, Koenig has leased the vineyard from Bev Fraser and is excited about what he sees in barrel.

“I’m thrilled to be able to work with them because Fraser Vineyard has been a source of some of Idaho’s best Cabernets,” he said. “It’s largely due to the fact that it’s a good site. But culturally, it’s always been kept at such low yields that they’re getting tremendous concentration and flavor profile.”

Koenig plans to continue that tradition, even as he admits it makes no financial sense to do so.

“It makes sense as far as wine quality goes.”

Koenig has planted a vineyard around his production facility and has modeled it after Fraser Vineyard.

“Vine spacing is denser and, as the grower who’s going to actually end up with the grapes, yield isn’t as important to me as quality,” he said. “So we’ll be able to keep that tradition of 2 tons per acre maximum.”

Koenig expects to release his first Fraser-designated wine in about a year.

Another wine he is becoming famous for is his Riesling ice wine, which he is able to make pretty much every vintage. In 2010, botrytis – known as “noble rot” – appeared in Williamson Vineyard, which is next to his winery. Koenig convinced the Williamson family to net a couple of rows with the hope of making a rare Trockenbeerenauslese-style wine.

“We made just a tiny bit – 40 cases – of botrytis single-berry-select TBA-style wine,” Koenig said. “It was wonderful to do. It was a spectacular thing to taste.”

Last year, those conditions once again occurred, and some Riesling clusters were infected with the rot by up to 95 percent.

“It was tremendous,” Koenig said. “They looked terrible and tasted wonderful.”

Thanks to a bumper crop of botrytis, he was able to make nearly 10 times as much TBA-style wine last year as he did five years ago. 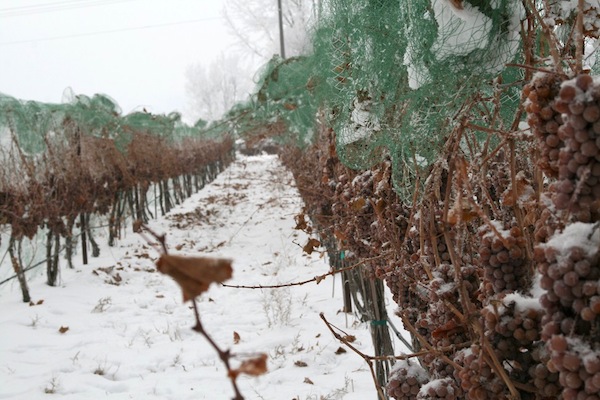 Koenig doesn’t think of himself as part of the old guard. His mentor, Bill Stowe at Indian Creek Winery, is one of the pioneers who set the industry in motion in the 1980s. But he has been around long enough to appreciate the changes he’s now witnessing with the Idaho wine industry.

“It’s completely shifted,” he said. “Ten years ago, restaurants wouldn’t talk to us – even if they liked the wines personally. They knew that their list had to have lots of stuff imported.”

That’s all changed, thanks to the growing improvements in the Idaho wine industry and a greater consumer interest in locally produced food products.

It’s also a testament to a new generation of Idaho winemakers, Koenig said, including people such as Melanie Krause of Cinder Wines, Meredith Smith of Sawtooth Estate Winery, Earl Sullivan of Telaya Wine Co., and Leslie Preston of Coiled Wines.

“They’re very good at winemaking. They’re brilliant at marketing. They’ve really brought the industry a whole new enthusiasm and youthful energy that was lacking,” he said. “It was definitely languishing when I first came on board. And for many years, it was tough sledding just getting people interested in Idaho wine.”

These new wineries’ abilities to use social media and other marketing tools astonishes Koenig.

“It’s really moved the ball forward for us all,” he said. “I’m really excited about the next 20 years.”