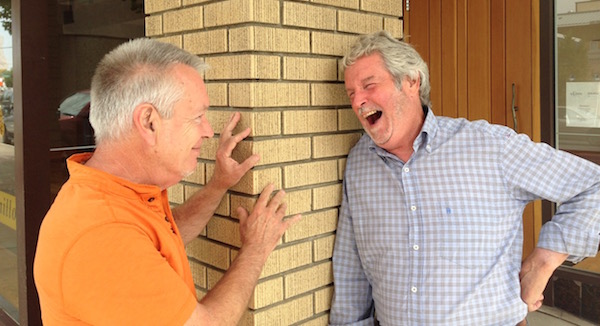 Doug McCrea, left, and Gino Cuneo are longtime winemakers in the Pacific Northwest. The pair have now teamed up to create The Latin Corner, a tasting room in downtown Walla Walla. (Photo by Andy Perdue/Great Northwest Wine)

WALLA WALLA, Wash. – Two Pacific Northwest wine veterans – one from Oregon and one from Washington – have landed together in a little place they like to call the Latin Corner.

It’s been a long, strange trip for Doug McCrea and Gino Cuneo through more than a half-century of combined winemaking in the Northwest. Now, they are in one of the most-visited regions in the Washington – and loving it.

“We came from doing different wines for a lot of years,” said Cuneo, owner of G. Cuneo Cellars.

Cuneo became well known for Cuneo Cellars in Oregon’s Willamette Valley, where he made not only Pinot Noir but also Italian-style wines using Washington grapes.

McCrea, meanwhile, was Washington’s original Rhône Ranger. When he launched McCrea Cellars in 1989 near the South Sound community of Yelm, he was one of the first to focus almost exclusively on Rhône varieties, including Syrah, Grenache, Mourvèdre, Counoise, Grenache Blanc, Picpoul Blanc and others.

Neither planned to end up as part of the Walla Walla Valley wine community, but here they are at the corner of Second and Rose – the Latin Corner.

It’s a far cry from where they started.

From obscure corners of Northwest 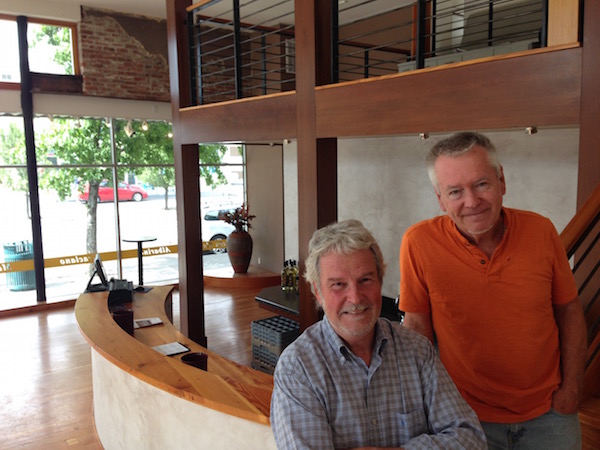 Cuneo launched his winemaking career in 1989 – the same year as McCrea – in the Eola-Amity Hills near Salem, Ore. He bought an old winery building that actually had once been a prune-drying shed with no insulation and a door that didn’t operate.

“I got it on the cheap,” he said with a chuckle. “But it came with a Pinot Noir vineyard with wonderful fruit.”

Today, Oregon is loaded with winemakers focusing on Pinot Noir. Back then, the industry was much smaller, but it still was difficult to stand out. So in 1993, Cuneo listened to the whispers from his Italian heritage and began bringing in Italian grapes, including Sangiovese and Nebbiolo. He was one of the first Oregon winemakers who dared to cross the Columbia River to bring in fruit from Washington.

In 2001, Cuneo took on some partners and moved his winery to Carlton, a quaint town off the beaten path in western Yamhill County. He built a beautiful facility that looks like it’s straight out of Tuscany, complete with olive trees and a restaurant. But through a series of events, including disagreements with his partners, Cuneo found himself on the outside looking in, and his winery was renamed Cana’s Feast.

It was time to start over, so in 2008, Cuneo launched a new brand that focused exclusively on Italian varieties from Washington, though he still was in the Oregon town of McMinnville. In 2011, Cuneo and his wife moved to Walla Walla.

McCrea, meanwhile, gained cult status as one of Washington’s top winemakers. He focused on Syrah and other Rhône grapes nearly from the beginning, and he was crafting vineyard-designated Syrahs and blends that consumers couldn’t buy quickly enough. He worked with some of the top vineyards in the state, including Boushey Vineyard in the Yakima Valley and Ciel du Cheval Vineyard on Red Mountain.

Eventually, Americans stopped buying as much high-end Syrah. Maybe it was the Australian Shirazes flooding the market. Maybe it was a growing interest in other varieties, particularly Cabernet Sauvignon. That, combined with the Great Recession in 2009, caused hard times for McCrea Cellars, which was jointly operated by McCrea and his ex-wife.

“McCrea Cellars hasn’t produced wine for a couple of years,” McCrea told Great Northwest Wine. “It was a pretty tough hit with those vineyard-designated Syrahs and Cuvée Orleans, which was the first true Côte-Rôtie style in Washington. Those top-end Syrahs were selling for $40 to $50 per bottle in Puget Sound – and they were selling. But after (the economic downturn), things really took a dive. So we thought we’d better just chill a bit.”

Meanwhile, McCrea happened to start a side project called Salida that focused on Spanish varieties. It all happened by accident. Phil Cline, owner of Naches Heights Vineyards near Yakima, happened to call McCrea one day saying a client had decided to opt out of a ton of Tempranillo. Cline offered to deliver it to McCrea on the west side of the state if he wanted.

“The origins of Grenache and Mourvèdre were in Spain,” McCrea said. “So I really was working with them for a very long time.”

Thus, when he began to work with Tempranillo, McCrea created a new winery: Salida. 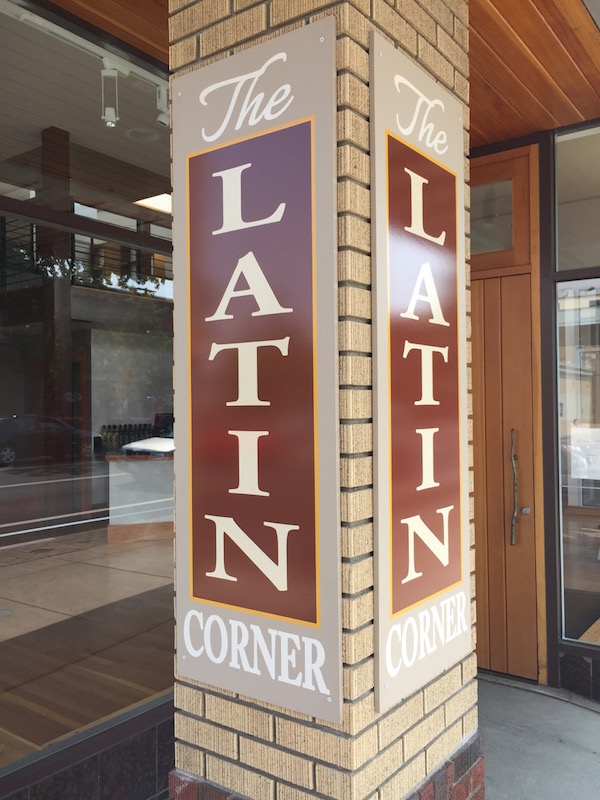 More than a year ago, Cuneo opened his tasting room in a former art gallery just across the street from the famed Marcus Whitman Hotel in downtown Walla Walla. It is an ideal location, surrounded by restaurants and in the epicenter of the town’s convention business.

But he was making fewer than 1,000 cases, and the space was a little too big for Cuneo, so he went out looking for a partner. He talked with various wineries, and nothing seemed to fit. Then he thought of McCrea.

The two have known each other tangentially for about 15 years, primarily through common vineyard sources such as Boushey and Ciel du Cheval. Both had been in the business for more than a quarter-century, and they were producing wines that were complementary rather than competitive.

So Cuneo called McCrea in February and suggested they consider working together. Doug had never considered Walla Walla as a possibility, but it got him thinking.

“I thought, ‘Well, this is intriguing,’ ” he said. “I’d never paid much attention to Walla Walla. In fact, I hadn’t been here for 15 years.”

But McCrea had plenty of friends in town, including pioneers such as Gary Figgins of Leonetti Cellar and Rick Small of Woodward Canyon Winery. So he came for a visit.

“This is a phenomenon here,” he said. “This isn’t something that’s just happening.”

By summer, McCrea was sharing the tasting room with Cuneo, and the Latin Corner was born. The name plays off the fact that the wines are from Italy and Spain, both part of “Latin Europe.” For McCrea, it also is a nod to his heritage, growing up in New Orleans, which is famous for its Latin Quarter.

The two share the Latin Corner space and a tasting room manager who represents both brands. It’s an equal partnership, a marriage of sorts. McCrea and his wife still live near Yelm, but he now spends every other weekend in Walla Walla, where he has an apartment. Ultimately, the McCreas would consider a permanent move to Walla Walla if the opportunity presented itself. For now, he will put up with the long commute. 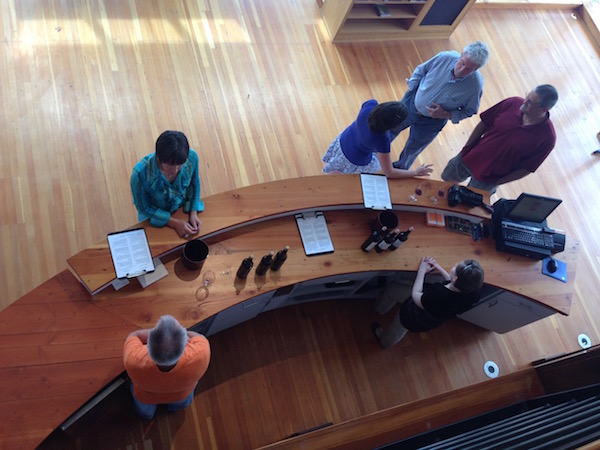 The Latin Corner in downtown Walla Walla is a shared space between Salida and G. Cuneo wineries. It is a former art gallery that has a bright, airy feel to it. (Photo by Andy Perdue/Great Northwest Wine)

A lot of McCrea’s fans have migrated with him to Salida, though a few are saddened that he no longer is making the delicious vineyard-designated Syrahs and Rhône-style blends that made him famous.

“I understand,” he said. “But I’m following my heart, my instincts, my path.”

Salida is about 2,000 cases, nearly all of which are Spanish varieties. The only outlier is Malbec – a Bordeaux grape that McCrea was turned on to – again – by Cline. He uses it to make a blend with Tempranillo called Fuego Sagrado.

Cuneo, meanwhile, continues his laser focus on Italian wines. He has done away with his entry-level Sangiovese and the wholesale model that went with it. Instead, he is focusing on small amounts of high-end wines, including Sangiovese, Nebbiolo and Barbera. Unusual in the New World is his “appassimento” style wine, which is made from raisined grapes. In the Old World, such wines are made in Valpolicella and are called Amarone.

“Somehow, we both landed on the same post,” Cuneo said. “We had success, we went through some changes.”

Now, the two longtime winemakers are able to offer visitors to Walla Walla something completely different than the Cabs, Merlots and Syrahs that are prevalent in this valley.

“People are able to come here and try these wines from Washington and their unique expression,” Cuneo said.

Their tasting room, which has an upstairs event space, is a big, airy room, not unlike something one might find on the Southern Mediterranean coast. It’s in the heart of downtown, five minutes’ walk from more than a dozen other tasting rooms and several restaurants.

For McCrea, Walla Walla is a nice fit after all these years living in the southern Puget Sound. He laments the fact that it used to take him an hour to get from Yelm to downtown Seattle. Now, he has to budget two hours for the drive.

“It’s really appealing here,” he said. “This is a really neat town. I like the pace. People will even say ‘Hello’ in the grocery store. I don’t even know who they are. It’s just incredible.”