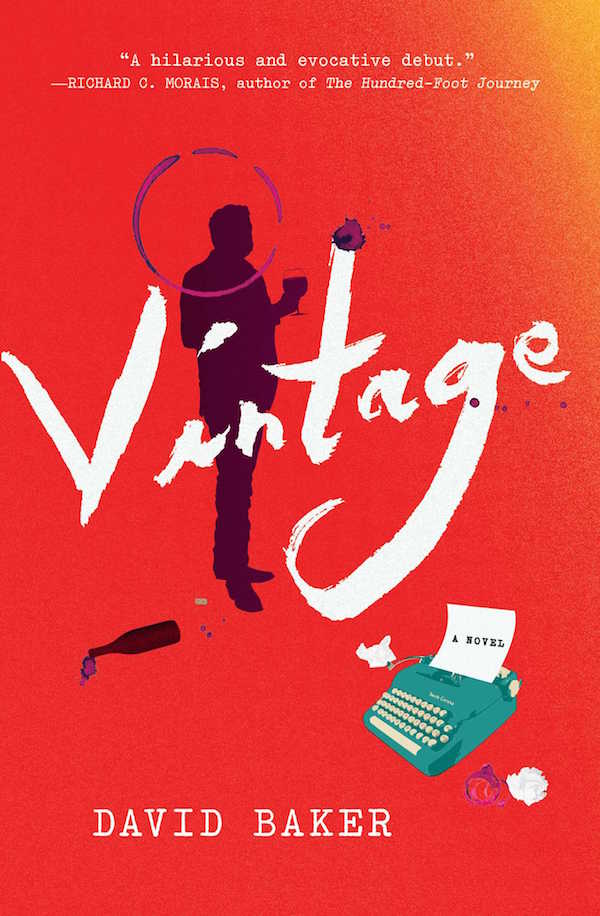 Vintage is a new novel by Oregon author David Baker and is published by Simon & Schuster.

First-time novelist David Baker might have a breakout book on his hands.

Baker, who lives in Oregon’s Willamette Valley, published Vintage this fall, and it is gaining great acclaim, thanks to a compelling and delicious story.

Vintage is the tale of a mythical bottle of Burgundy, a war-time wine that was nothing more than a myth until Bruno Tannenbaum happens across a cork hidden in a storage locker in Chicago.

Bruno is the hero of this story, a deeply flawed character whose considerable writing talent has been mostly wasted by a decade of sloth, ego and a wandering eye. What’s left of his reputation continues to be sullied by self-inflicted circumstances as he grapples with the hope of recapturing the magic of his first book.

At the beginning of each chapter, we are treated to a part of Bruno’s prior works related to cooking and wine. This is a charming way to introduce what is happening next and helps us to further understand what is behind Bruno’s motivations.

Vintage opens with Bruno struggling with one of the worst cases of writer’s block ever recorded, and his drunken antics have left him sleeping on his mother’s couch because his wife has kicked him out. In fact, the only two people who believe in Bruno are his young daughters, the eldest of whom wants to pursue cooking as a vocation.

His one big hit, a book called Twenty Recipes for Love, has landed him a plum job at a daily newspaper in Chicago, where he writes the occasional column on food and wine. He produces so little copy, it’s a wonder he’s lasted as long as he has in the increasingly difficult newspaper world. Top that with the fact that Bruno actively avoids technology – including computers, smart phones, blogs and social networks – he can seemingly barely function in modern society.

All of this sets Bruno up for a raucous adventure from Chicago to France to Germany to the bowels of a disturbing Russian prison. Throughout the pages, Bruno regains his passion and his nerve, all while continuing to disappoint those closest to him.

It might be tempting to draw comparisons to Sideways, the Rex Pickett novel that became an Oscar-nominated film by the same name. But Vintage is a better book, with more likable characters and considerably less raunchiness. Bruno is a character we can learn to love – and he’s a much better writer than Sideways protagonist Miles Raymond.

Baker knows of what he writes, having worked amid the vines in Burgundy. He also went to college in Chicago, so he is able to write the story from personal experiences.

Baker also is a successful filmmaker, and his documentary American Wine Story came out last year. The film looks at winemaking across the American landscape and ultimately focuses on Brooks Winery in Oregon and the story of Jimi Brooks, a young winemaker who died in the prime of his life. Brooks’ young son became the owner of the winery and, thanks to the support of family members and other members of the Oregon wine industry, has been able to keep his father’s legacy and winery intact.