ASHLAND, Ore. — Weather data proves what those in the Walla Walla wine industry already knew: The 2015 vintage was even warmer than last year’s record.

Renowned climate expert Greg Jones, a professor at Southern Oregon University in Ashland, released his End of Season Weather and Climate Review on Tuesday, and his Walla Walla Valley station in Milton-Freewater, Ore., recorded 3,895 growing degree days for the 2015 vintage from April 1 through Oct. 31. That surpasses last year’s total of 3,680 GDD and served as example of what much of the Washington wine industry experienced in the Columbia Valley.

“Growing degree-days ended the season at or above the values seen in 2014, with the highest departures coming in Washington (5-15% above 2014),” Jones wrote. “For Oregon, April through October accumulations ended from slightly down in the Willamette Valley (2% below the record numbers seen in 2014) to a percent or so up in the Umpqua and Rogue valleys to 6% over 2014 values in the Walla Walla Valley.”

Jones, who travels the globe sharing his findings and insight with the international wine community, noted this year in the Pacific Northwest continued what has been a trend compared to the past four decades.

His McMinnville weather station, which serves as an indicator for some Pinot Noir producers in the Willamette Valley, recorded 2,810 growing degree days. That was off last year’s balmy 2,858 total, but it still was nearly than 1,000 GDD warmer than the cool vintage of 2010.

“A growing season summary from March through October shows the overall warm season with temperatures that were 1.0-4.0°F or more above the 1981-2010 climate normals,” Jones wrote. 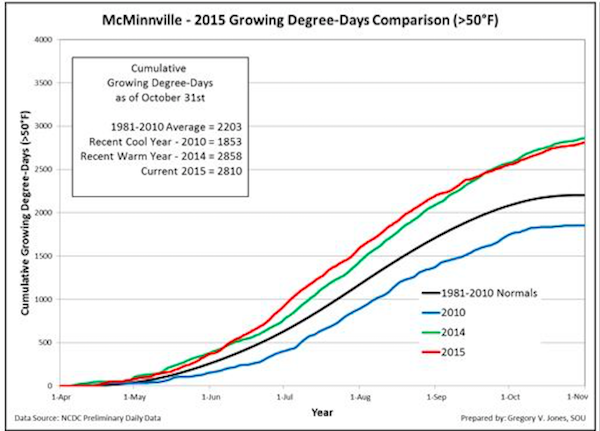 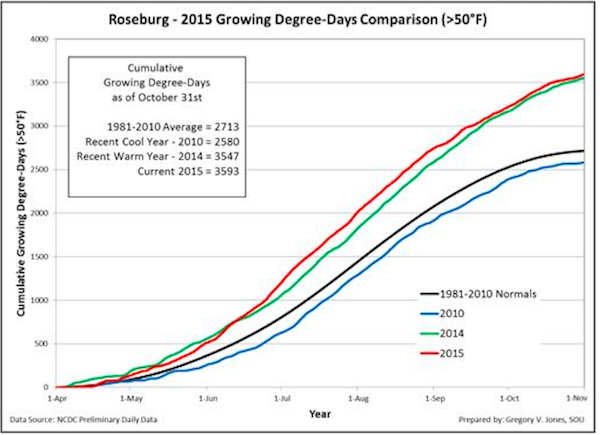 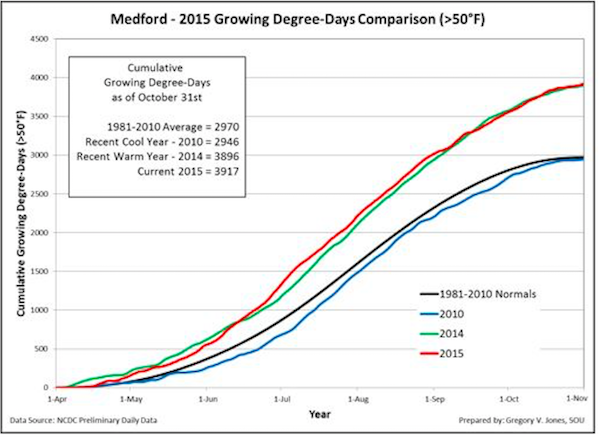 One benefit for the hot vintage and warm October meant most winemakers and growers pulled off fruit and began to hardened off vines before frost became a concern.

“While the growing season was effectively over by the first of October, the month continued to add to the overall warm and dry conditions in the western U.S.,” Jones wrote. “The coolish September gave way to a very warm October throughout the western United States all the way to the Plains and south into Texas while the eastern half of the country was near normal to cooler than normal in northern Maine.”

However, the warm waters of the North Pacific continued to create conditions that made some grape cluster more susceptible to mildew and reduced the amount of natural acidity in grapes. Cool nights help preserve natural acidity, and some winemakers have chosen to add acid to fermenting lots. It’s an issue they may continue to face in 2016.

“The main result of the warmer waters is that humidity levels are up across the West, along with nighttime temperatures,” Jones wrote. “The current long range forecasts continue to be driven by the combined effects of a warm North Pacific and El Niño conditions in the tropics.”

And the projected El Niño historically won’t help the Pacific Northwest reverse the long-term drought that particularly hamstrung farmers in Washington’s Yakima Valley, fueled the devastating fires near Chelan and other areas of North Central Washington, and created nightmares for irrigators.

So for the next 90 days of November, December and January, the models indicate the approaching 2015-2016 winter will be similar to that of last year — mild and relatively dry.

“Forecasts are pretty much following the typical El Niño influences with greater chances of broader warmer than average conditions in the western US,” Jones wrote. “Alaska and the PNW are forecast to be the warmest regions, but the entire Western states are likely to see a mild start to winter.

“For precipitation, the November-December-January outlook tilts the odds to near normal to below median precipitation in the PNW and the expansion of above normal precipitation for the southern portion of California into the desert SW and Texas,” he continued. “This is a classic pattern driven by historic conditions during El Niño. However, El Niño conditions can have a large variance in where and when the onset of rains occur, so only time will tell.”