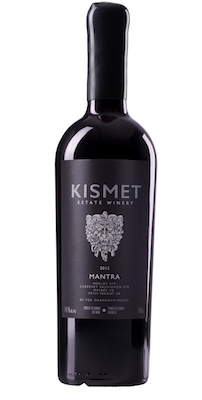 This young winery near British Columbia’s Golden Mile and the Black Sage Bench adopted the Punjab word for “destiny,” and after growing grapes for winemakers throughout the province for 20 years, the family recently began to produce wines from their 200 acres of vines. Their Right Bank-style blend — which leads Merlot (57%), followed by Cabernet Sauvignon (37%), Malbec (3%) and Petit Verdot — spent 11 months in French oak. Its medium structure carries a theme of Bing cherry, red currant, milk chocolate and orange oil, which come together for terrific balance as the tannins settle in the background. Suggested pairings include beef, Lamb Korma and a cheese plate. Kismet had its 2013 Syrah and 2014 Riesling Icewine receive platinum medals at the 2015 British Columbia Wine Awards, and this was part of the discussion, too.