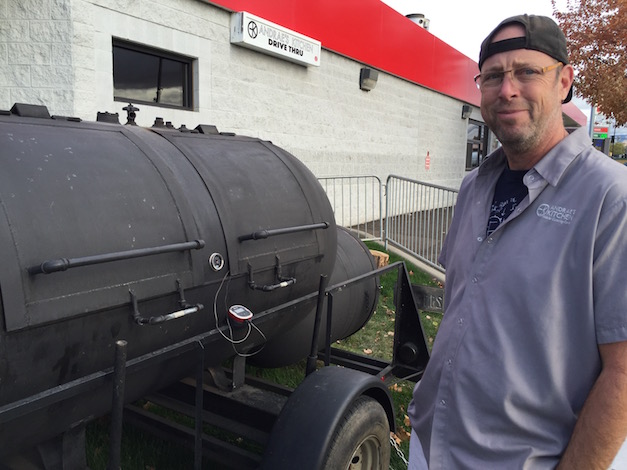 WALLA WALLA, Wash. — Not that Walla Walla wine lovers needed another reason to swing by Andrae’s Kitchen, but wine country chef Andrae Bopp parked his new “Buehler” wood-fired smoker near the back door of the bustling Cenex Co-op on Rose Street.

“A new toy for AK’s in the gas station,” Bopp told Great Northwest Wine. “We’ve had it about a month, and we’re having a lot of fun with it — a lot of fun.”

Bopp, a native of St. Louis and graduate of the French Culinary Institute in New York City, this former competitive cyclist has operated the innovative Andrae’s Kitchen inside the convenience store for four years. His latest culinary adventure, however, is a throwback for meat prep.

“We just wanted to get back to cooking with pure fire and smoke, and this is the vehicle to get it done,” said Bopp, whose name rhymes with pope. “It’s old school, but it’s new to us.”

On this day, the menu included a Smoked Bologna Sandwich, smoked pulled pork and a Cuban sandwich made with smoked ham.

“Every day, there will be something from this that’s either a special or on the menu,” Bopp said. 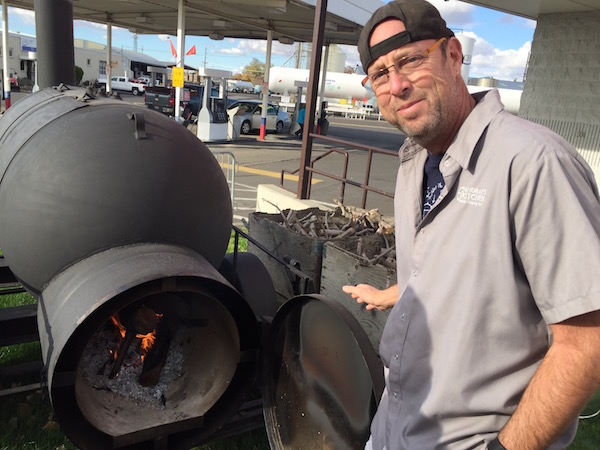 Andrae Bopp only uses apple wood in his “Buehler” smoker near the Cenex Co-op at Rose and Ninth in Walla Walla, Wash. He plans to begin retailing smoked bacon to customers, but he vows never to use the Buehler to smoke fish. (Photo by Eric Degerman/Great Northwest Wine)

He collaborated with Clint Hale of Opp and Seibold General Construction, a Walla Walla company with a portfolio including the iconic red barn of Walla Walla Vintners. Their design focuses on two repurposed propane tanks — one 500 gallons and the other 125 gallons.

“It’s called Buehler,” Bopp said. “The tank was made in 1954 by Buehler Manufacturing in Los Angeles. The name kind of fit, so we just call him, ‘Old Buehler.’ My pit master, Jody Harrison, comes in and says, ‘You want me to fire up ol’ Buehler this morning?’ “

And the joint design by welder and chef proved immediately successful.

“There was some skepticism on the smoke flow when we built it, but the first time we ran stuff through it, it was like, ‘Oh my god,’ ” Bopp said. “It works via convection, and the manifold helps pull the smoke out. We control the flow up at the damper.” 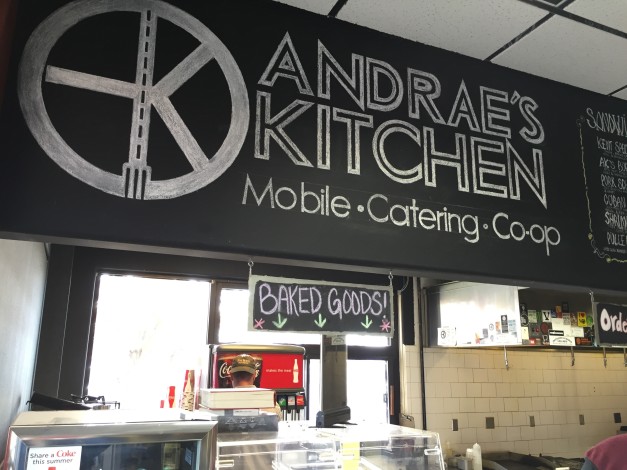 Andrae Bopp owns and operates Andrae’s Kitchen in Walla Walla, Wash. The mobile smoker is stationed at the Cenex Co-op, and he also caters wine events out of his food truck. (Photo by Eric Degerman/Great Northwest Wine)

Customers might not always see Buehler at the Cenex because it is built to roll. That means Bopp can haul both Buehler and 18-foot food truck to catering gigs and wine functions throughout the Walla Walla Valley and beyond. In the past, he’s motored his food truck to West Seattle for a competition and the Gorge at George for the Sasquatch! Music Festival.

“You show up with something like this, and it’s a cool thing for people to stand around and drink wine or beer or whatever and talk about it,” Bopp said.

Its versatility and design allow the internal temperature to reach 500 degrees, but the Buehler cruises at a constant 200 to 250 degrees “with minimal effort,” Bopp said.

He’s particularly keen on developing a market for bacon, and much of his smoking is done at lower temps. On this day, the focus was on slabs of pastrami.

“That pastrami was brined for five days, and then we will smoke it in here until it reaches an internal temperature of 150,” Bopp said. “We will finish it in the oven over a water bath.” 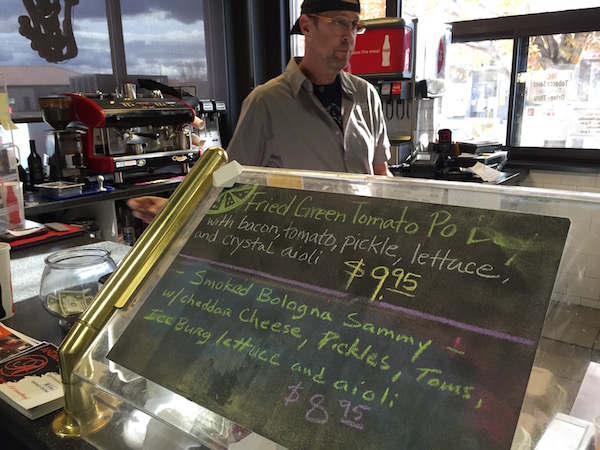 Andrae Bopp offers creative and delicious daily specials at AK’s at the Co-op in Walla Walla, Wash. No items on the regular menu are priced above $9.95. (Photo by Eric Degerman/Great Northwest Wine)

For those smoking at home, Bopp offered some tips:

Bacon likely will be the most intensive and prized product from the Buehler.

“That starts with a seven-day brine,” he said.

He launched the retail side by tested his market with brisket out of the Buehler.

“We did 65 pounds of brisket, first selling it in sandwiches then selling it by the pound,” Bopp said. “It was a good start, and it lasted less than 24 hours. Already we are having people come in and say, ‘I’ll order whatever you have in that’s smoked.’ ”

Wood-fired pizza probably won’t appear on the menu, and smoked fish never will, he said. The focus will be on cuts of meats that are either brined or prepared with a rub.

“We’re only going to use apple wood, and we’re never going to put any fish in here,” Bopp said while checking a slab of pastrami. “Once you do fish, you can never totally get the smell out.”

Bopp often thinks outside the box 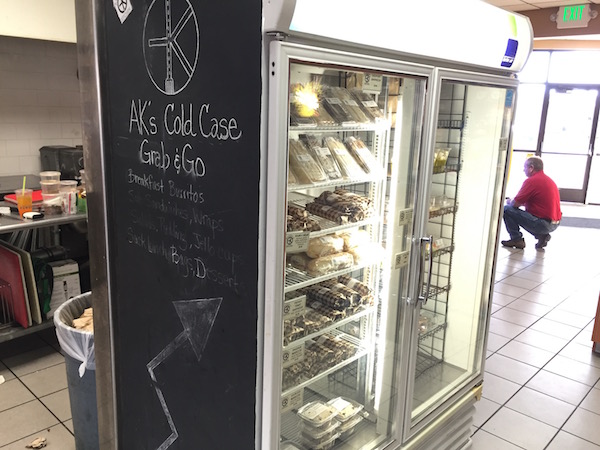 Bopp began developing a relationship with Washington winemakers during his five years in Boise when he operated acclaimed Andrae’s Restaurant just a few blocks from the Idaho state Capitol.

In 2007, Bopp won two awards from the Washington State Wine Commission, one for Best Out-of-State Washington Wine Program. However, within a couple of years, he closed Andrae’s in the midst of the Great Recession and moved to Walla Walla.

By 2010, he’d invested $80,000 in his mobile kitchen and began catering throughout the Walla Walla Valley.

Earlier this month, it was Beer-Battered Deep Fried Beecher’s Handmade Cheese Curds out of his food truck for the Wisconsin boys at Dusted Valley Vintners. It’s just one of many working relationships Bopp has developed with some of the Walla Walla Valley’s top winemakers.

Fans of the Seattle Seahawks may remember Bopp making news and earning a mention on ESPN’s SportsCenter by partnering with vintner Trey Busch for a winemaker dinner in exchange for tickets to the NFC Championship Game. It was a creative and successful pitch that allowed Bopp and Busch to witness the Seahawks hoisting the George Halas Trophy on the road to winning the Super Bowl. 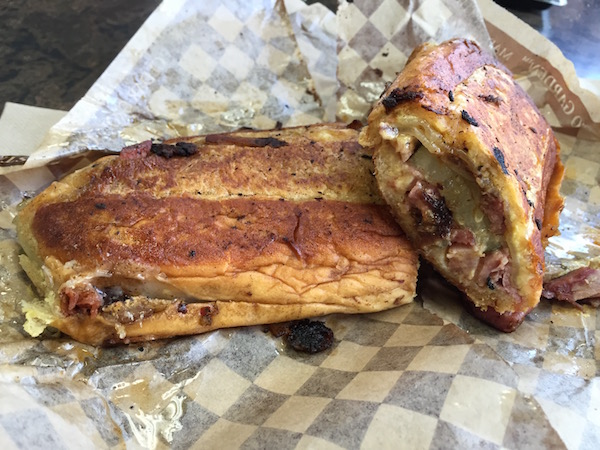 If there’s an item at AK’s at the Co-op that includes meat, there’s a strong chance it came from the smoky cauldron of the Buehler. And everything on the menu is less than $10. He also offers items from Cookie Construction Co., coffee from Walla Walla Roastery and milkshakes feature berries — when in season — from famed Klicker’s Strawberry Acres.

And just in time for Thanksgiving, Bopp will sell you a Buehlerized 12-pound turkey ready to take home on Nov. 25 — Thanksgiving Eve.

Andrae’s Kitchen at the Co-op is open seven days a week, starting at 6 a.m. Most days, the counter closes at 6 p.m., but it stays open late on Friday. Get there early on Sunday mornings, which is the only time he sells his beignets.

The counter accepts orders by phone and by text message, and folks can use the drive-through. If you need to go inside, the lavatories inside the Cenex are maintained to higher standards than some restaurants.

Indeed, the food at AK’s is more than OK. Just last week, Portland vintner John Peacock used Facebook to praise Andrae’s Kitchen. “Best food in Walla Walla, hands down. And it comes from a gas station!”