The 2014 Slow Pinot Noir is a collaboration between nearly a dozen top Willamette Valley winemakers and also is helping raise money and support for the Oregon Slow Food movement.

“I was looking at the 2014 vintage,” said Don Oman, who has been in the Oregon wine business for more than 30 years. “It was a big vintage, a ripe vintage with so much extra fruit. I thought maybe it was time to do a benefit project.”

Oman is owner of Casa Bruno, a wine importer and distributor in Portland and co-founder of Slow Food Portland. He also founded Pastaworks in Portland in 1983.

Because the 2014 vintage was so large, Oman decided to contact some of the Oregon wineries he works with to see if any might want to contribute a barrel of Pinot Noir for the Slow Pinot. He started with eight producers and ended up with 11, enough to produce 270 cases of wine.

“I’m always willing to do something new and exciting,” Grochau told Great Northwest Wine. “I think a warm vintage makes it a little easier to blend than if it was a cool vintage. The wines mesh together easier.”

The Slow Pinot Noir was released in November for $30 per bottle, with proceeds benefiting local Slow Food chapters. In the first two weeks, about 1,000 bottles were sold. Oman expects the wine to be gone within three months.

He was able to reduce overhead costs by getting deals on bottles, corks, capsules and labels. 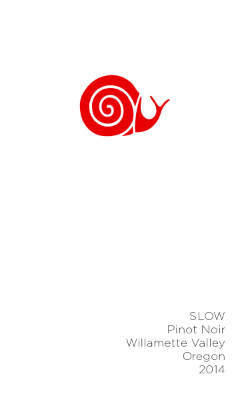 The 11 wineries that each contributed a barrel of Pinot Noir to the project were:

“We had a good choice of barrels,” he said. “That’s a function of the 2014 vintage. It was an early, ripe harvest but also mature. The only setbacks were trying to find wines with balance.”

His goal was to put together a wine that came in under 14 percent alcohol, and the Slow Pinot Noir weighed in at 13.8 percent.

Getting the producers to work with Oman was fairly easy, he said. Oman added that it was important that the wines not be donated. One of the goals of the Slow Food movement is supporting local agriculture.

“We came up with a price that would benefit all,” Oman said. “Most of it was estate fruit, all vineyards of note. People worked within their own interpretation of sustainable agriculture.”

Grochau, who just completed his 14th harvest in Oregon, loved working on the project.

“It was a pleasure to work with all of these wineries,” he said. “It was a good challenge. I needed to respect the wine and get it right. There was a lot riding on this both personally and professionally.”

He makes about 8,000 cases for his eponymous winery, which he launched in 2002. Before that, he worked at Higgins restaurant in Portland for several years and also worked for Erath and Brick House before launching Grochau.

About the Slow Food movement

Slow Food Portland was founded in 1989, making it among the oldest in the United States.

Oman joined Slow Food after attending VinItaly, a large international wine exposition. For Oman, it was a simple decision because the organization’s goals were in line with his: delicious and sustainable food produced by local farmers.

While the 2014 Slow Pinot Noir appears to be a success, Oman is not sure whether he will do the project again. It has taken a lot of time for a guy who was trying to be retired and also is running a distributorship. And ultimately, it competes with Pinot Noir producers.

“At this point, I have no plans to do it again,” he said.